‘Thanks For Keeping Your Mouth Shut’: New Sexual Violence Campaign 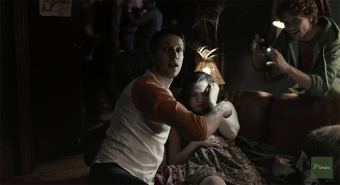 “Thanks for keeping your mouth shut,” the young man speaks to the camera during a party scene in which he’s removing the jacket from a passed-out girl as his friend films. “Thanks for minding your own business,” a man says, massaging the shoulders of a visibly uncomfortable woman at work. The message is paid for by the Government of Ontario and part of its #WhoWillYouHelp campaign.

The commercial — which has been airing on television and can be viewed on YouTube — includes other scenarios too. “Thanks for not telling my girlfriend,” a school kid says after showing cell phone photos of his girlfriend to his friends, who can be heard saying “show me the good ones” and “send that to me.”

Another shows a young lady in a bar, distracted by seeing a friend, and a guy putting a powder, presumably a date-rape drug, in her drink. “Thanks for not telling anyone,” he says.

“Who will you help? Stop sexual harassment and violence when you see it,” says the voiceover, the crux of the ad.

The ad was posted to YouTube in early March and to date has more than 767,000 views.

“This is Ontario's new action plan to stop sexual violence and harassment. Read it to learn more about our plans and how you can help build a safe, fair and respectful society for all,” it says underneath (the 40-page document can be downloaded).