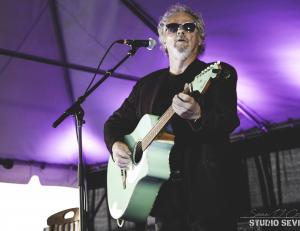 Myles Goodwyn, best known as the lead singer and guitarist for Canadian rock band April Wine, has released a new song and video related to the injustices of his homeland’s residential school system for Indigenous children.

“It’s a personal response by Jim Henman and I to the recent finding of unmarked graves of Indigenous children in Canada,” Goodwyn said in relation to his longtime April Wine collaborator in a media release. “We felt like making a statement regarding the discovery of these graves, and this song is that statement.”

Halifax-based Goodwyn has a personal connection to the subject matter of “Some Of These Children (They Never Grew Up),” he said in the release. “My life partner, Kim, is native Sioux Assiniboine, and her mother was a survivor of the ‘assimilation’ attempts by the Federal government and the Catholic Church to ‘remove the savage from the Indian.’ “I have felt her pain as more and more bodies of these unfortunate children are discovered.”

Another song, “Darling Where Are You,” expresses Goodwyn’s concern and compassion for missing Indigenous women.

Those two tracks are among the 12 that will be included on Goodwyn’s forthcoming Long Pants album of songs from his previously unreleased archives, with one song’s origins dating back 40 years.

Another song from the album, “Over the Moon,” was written by Goodwyn after he learned his son Cary had Type One Diabetes.

“It’s a serious and chronic disease, and the song is one of love, understanding, optimism — which is an important message of hope and love to all children and parents dealing with diabetes,” Goodwyn said in the release.

“I Leave Today” was inspired by fellow Canadian singer/songwriter Dan Hill’s mother, Donna Mae Hill, who chose euthanasia to end her life at the age of 90 in 2018.

Watch the video for “Some Of These Children (They Never Grew Up)”: