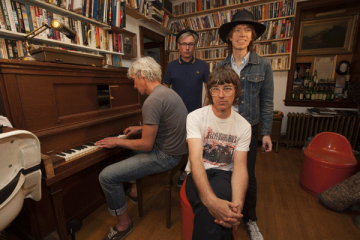 Sloan has just released an album, Commonwealth, on which all four members get their own “sides.” The Toronto-based band, whose members all write and sing, have always taken a democratic approach to their music. So it would come as no surprise that they were all on the same page when they chose a charity to receive $25,000.

The band was invited to play Wekfest, financier and new Dragon’s Den panelist Michael “Wek” Wekerle’s annual fundraiser at his Caledon, Ontario home.  Our Lady Peace, 54.40 and USS were also on the bill. Tickets were $200 plus a fee. A number of charities received donations from this event that took place Aug. 17.  Wekerle offered Sloan $25,000 for the charity of their choice.

“Our chosen charity was CAMH, which is the Centre for Addiction and Mental Health in Toronto,” Sloan’s Jay Ferguson tells Samaritanmag. “It’s very important to support. There is so much research to be done in that field and we both probably know someone who has either benefitted from it or could have benefitted from it, so that was one of the reasons we chose that as our charity of choice this time.”

Wek is also a big supporter of CAMH. He tells Samaritanmag via Twitter that Seeds of Hope and Austism Speaks also received money from Wekfest 2014.

Getting his bandmates Chris Murphy, Andrew Scott and Patrick Pentland to all agree on CAMH was simple, says Ferguson, and just took a little bit of back and forth.

“We’ve done things for different charities in the past for the food bank and for some other ones in Toronto and our manager Mike [Nelson] chimed in and said, ‘Here’s a couple of options,' and Chris said, ‘CAMH’ and Andrew was like, ‘CAMH, for sure.’ He felt strongly about it. So we agreed that that was good. It didn’t take any convincing to choose that one.”

Sloan also has an upcoming fundraising gig at Caplansky’s Delicatessen Nov. 29 to raise funds to fight prostate and testicular cancer. Only 100 tickets are available and can be had by making $100 donation via the restaurant’s Mo’vember page.