Rude Band MAGIC! To Play First Charity Show But Music Is Their Cause 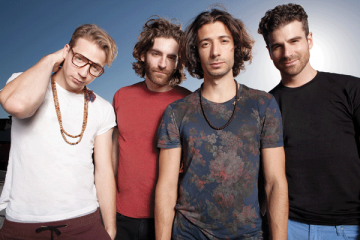 MAGIC!, the Los Angeles-based Canadian transplants whose reggae-pop song “Rude” went double-platinum in Canada before their debut album comes out in June, will be joining Simple Plan, Kardinal Offishall and Alyssa Reid for OneXOne’s Inaugural Million Meals Movement May 23, performing a fundraising concert at Toronto’s Sony Centre for the Performing Arts. Most of the artists will also be packing the meals in the daytime at Kool Haus.

Proceeds from the concert (tickets range from $42 to $116) will benefit the ONEXONE and Simple Plan Foundations and “kick start the community-based initiative of eventually packing one million meals for children in need across North America,” according to ONEXONE. Food services company Sodexo, which serves one million customers daily, will be providing meals that will be packed and distributed in Toronto and Montreal.

This will be the MAGIC!’S first charity event and while all four band members — frontman Nasri Atweh, guitarist Mark Pelli, drummer Alex Tanas and bassist Ben Spivak — are fully onboard and supportive of movement, for now it’s just a one-off.  Atweh tells Samaritanmag he suspects, collectively, they will pick something music-related to truly get behind.

“As a band, right now, what we’ve been talking about … my older brother’s actually a school teacher and we’re always having discussions about kids who learn how to play music at an early age and how they probably have an advantage and a learning curve over other kids because music, in itself, if you can get to that point where you can actually learn how to play an instrument at a young age, you actually learn how to focus on something very minute.

“So that’s something we’re talking about, trying to figure out how to involve ourselves with either the school board or just start off with one school and just see how it goes, teaching kids how to play music.”

Atweh is a successful songwriter and producer with creative partner Adam Messinger (known as The Messengers) — penning songs for New Kids On The Block, Justin Bieber, Pitbull, Chris Brown and Christina Aguilera — but he says, “Right now MAGIC! we’re still poor musicians who are just starting.

“I know for a fact that we’re all going to have our own causes because all of our parents and parents’ parents, through your own genetic line, have issues and we’ll all attack those things, but right now what we have as a unit is music. So we can share that right now until we’re able to make real money and be able to make more of a difference.

“Right now we’ll share our gift of music to people. MAGIC! will definitely be one of the bands that people can look up to and feel comfortable and you can bring your kids out to the show — because we’re not acting weird. We just play our songs and have fun and through that I believe that people, young kids, can look up to us more than a lot of these weird pop stars who are on drugs and a mess.”