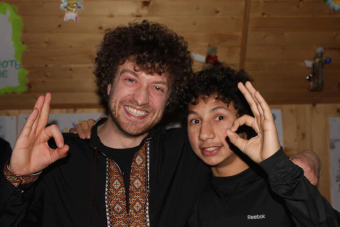 When Toronto-based band Invasions aren’t creating music they describe as a "lost soundtrack for a Quentin Tarantino movie,” they volunteer with Help Us Help The Children (HUHTC), a project of Children of Chornobyl Canadian Fund, that supports orphaned children in Ukraine by running summer and winter camps, as well as providing them with clothing and educational opportunities.

It’s a cause that is particularly close to the heart of lead singer Alex Zen, who is of Ukrainian descent. “I have been raised with strong connections to the Ukraine my entire life,” Zen tells Samaritanmag. “Ukrainian folklore has played a big part in my upbringing and introduction to music, storytelling and expression.”

In addition to raising funds independently and with Invasions — made up of Zen, guitarist Matteo Buckberrough, bassist Brian Cuddy, drummer Ara Carson, and trumpter and tambourine player Brian Moyer — Zen travelled to Ukraine with his entire family in the winter of 2013 to volunteer at one of the camps.

His family put together packages that contained clothing, sporting goods, and personal hygiene items, and delivered them personally to the children. “There has never been a moment so uplifting as seeing the children receive these packages and wear the clothes we brought, many of which were mine from growing up,” he says.

Zen was also touched by how quickly the campers bonded with him and his siblings. “Within a day of entering the camp, the children gravitate towards certain volunteers who share similar interests or characteristics. My sister, brother and I bonded with some of the hardest done by. After a few days, the small group of boys we connected with warmed up to us. They were the sweetest most outgoing kids in the camp, treating us with constant jesting and jokes.”

The children who receive these packages and attend the camps are in desperate need of the support HUHTC offers, says Zen. There are currently more than 100,000 orphans in Ukraine – a staggeringly high number for a country with a population of 45 million.

“Only 1 percent of orphans will obtain higher education, only 27 percent will find work, 30 percent will become addicted to drugs, 60 percent of girls will fall into the sex trade, 70 percent of the boys will turn to crime and 15 percent will commit suicide,” according to Zen, who compiled these numbers from three different sites, The Orphans of Ukraine, Eloy Project and Children of Chornobyl Canadian Fund.

HUHTC focuses on empowering these kids and helping them to develop transferable skills that they can use in the workforce once they graduate, and volunteers play an important role in helping the organization realize its objectives.

“If someone would like a truly emotionally enriching experience, I'd recommend volunteering at one of the summer or winter camps. It truly made a positive impact on my life. I, as well as my family, intend on attending future camps where we can reunite with the kids. We have continued to accept donations for the children and will once again deliver them directly.”

He adds that Invasions are in the process of setting up a large musical event that will raise funds for Help Us Help the Children.