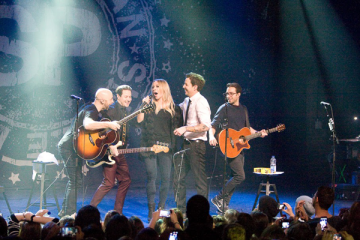 Simple Plan capped off 2014 by giving away $300,000, a record for the Montreal rock band’s Foundation and bringing its total tally since forming in 2005 to $1.5 million in donations. The 2014-15 funds went to 26 organizations dedicated to helping young people — the mandate of the Simple Plan Foundation — from War Child Canada and SickKids Foundation to Festival Innu Nikamu and Les Centres jeunesse du Quebec.

“Every year, our goal is to always raise the amount of money the Foundation donates,” Simple Plan drummer Chuck Comeau tells Samaritanmag. “We started with $100,000 the first year the Foundation started and we're very proud to have tripled that amount this year. The 2014 donations come from all the different charitable initiatives and partnerships we worked on during the year.

"It was a very busy year for the Foundation and the band devoted a lot of time to charitable endeavours. We teamed up with Kiehl's on a huge campaign that raised over $40,000 for the SPF. We played in and performed at Max Talbot's golf tournament and received a very generous donation from his organization. We also performed and played in the CN employees charitable hockey game and received a very generous donation of $50,000 from them.

“We also participated in a few other charitable activities that helped raised money for the Foundation,” he adds. “All this combined with the great success of our 2013 Simple Plan & Friends event contributed to this year's record-breaking donation.”

For the second annual Simple Plan & Friends benefit show, Nov. 24 at Montreal’s Corona Theater, hosted by Quebec TV/radio personality Anne-Marie Withenshaw, Comeau says the band — including frontman Pierre Bouvier, guitarists Jeff Stinco and Sébastien Lefebvre, and bassist David Desrosiers — “wanted to shake things up and offer our fans and SP Foundation supporters something fresh and different.” To that end, they enlisted their friends, as the event title suggests, and put on an acoustic concert featuring some popular Quebec artists, such as Marie-Mai and Les Trois Accords.

“I think it was one of Marie-Mai and Les Trois Accords' first full acoustic shows so it's cool to be able showcase them in a more intimate setting,” says Comeau.

“The day started with a press conference where we announced our 2014 donations and invited representatives of four of the charitable organizations we donated to to present their cause and how they work to help young people."

The organizations were Fondation Hôpital Maisonneuve-Rosemont, a stem cell research program; L'Extension, a University of Montreal program to help young students from poor neighbourhoods succeed; Spectre De Rue – TAPAJ, a program that aims at helping young people in difficult situations to earn an income by offering them jobs and work opportunities; and Gris, which fight homophobia. 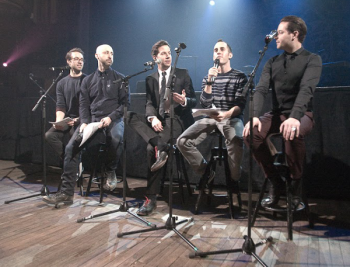 "Then we had a one hour VIP cocktail where all the artist and us of course do a giant meet-and-greet with over 350 guests, take pictures, sign autographs and hang out with the fans. It's the distinctive aspect of the SP Foundation shows; it's a chance for the fans to spend time with us and interact,” Comeau continues. “Then, we had Marie-Mai perform her set, followed by a live auction and finally our performance. After the show, we went back into the crowd for another meet-and-greet session with the entire crowd.”

Simple Plan, which has released four top-selling studio albums in its career (2002’s No Pads, No Helmets…Just Balls, 2004’s Still Not Getting Any…, 2008’s Simple Plan and 2011’s Get Your Heart On), is set to release a new album this year. The band premiered the new song “Boom” at the event.

“’Boom’ is a fun song about long-lasting love,” says Comeau. “We are still writing songs for the new album and we have a few so far that address some social issues.”

As 2014 drew to a close, and Simple Plan began to assess who would reap the benefit of their fundraising efforts, Comeau says they worked in cooperation with the organizations to pick the programs or created a new one with their donation.

“We also make sure to support all levels of charitable organizations from huge ones like St-Justine Hospital, War Child and SickKids Hospital to much smaller operations like Musique X in Montreal-North that gives access to musical instruments to young people in a very poor neighborhood of Montreal,” he says.

“This year, we're excited to support for the first time L'anonyme, an organization working to help young people from 14 to 30 years old living on the streets of Montreal and giving them a chance to express themselves through a radio show initiative, as well as Doctors of the World'and Spectre de rue –TAPAJ.”

Simple Plan also ended the year with a cool feather in their cap: They received the Honorary Peace Medal from the YMCA Nov. 21 at The Peace Medal Ceremony. “Every year in November, the YMCA celebrates individuals or groups who, through their actions and dedication, have helped make their community, our country or our entire world a more peaceful place,” it says on the YMCA web site.  "The Peace Medals Ceremony takes the form of a benefit luncheon. The funds raised are invested in YMCA programs that foster the development of youth.”