Q&A: Busty And The Bass Want to Incorporate School Visits on Tour 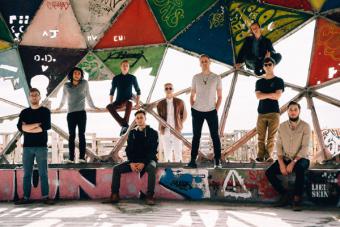 There are a few cliche things emerging pop bands are known to do once they start to make it. Maybe it's a fancy new car, or clothes, or maybe some wild parties where who knows what'll happen? It's entirely possible Montreal-based nine-piece soul pop band Busty and the Bass have done all these things (we've got no insider knowledge one way or the other).

Somewhat less common is a band like Busty and the Bass coming straight off a breakthrough gig at Toronto's Danforth Music Hall, after the release of their album Uncommon Good in the fall, using their newfound clout to launch an on-the-ground, in-the-schools music education initiative.

This is entirely fitting considering Busty and the Bass' originally emerged out of McGill University's jazz program (some band members even used the act to secure related school credit) and their earliest support came from being the go-to campus party band. But the band's guitarist Louis Stein told Samaritanmag, "all of us are products of not-well-funded music education."

Now, having officially completed their first-ever school drop-in at J.G. Simcoe School Public School in Kingston, Ontario, the band are hungry to do more. Today, they are actually back in Kingston to perform at Coalition for Music Education's Youth4Music, a five-hour event at Queen's University featuring guest speakers, jam sessions and roundtable discussions.

Samaritanmag spoke to singer Nick Ferraro and Stein about how their first foray into school house rock went, what they hope to do in the future, and how The Tragically Hip are connected to all of this.

Louis Stein: A friend of ours is a teacher candidate at Queen's University and we had been discussing brainstorming this idea of incorporating school visits into a tour schedule. She had been recently placed at that school and invited us to come. We did a full concert for the entire school and then we had small group, intimate coaching for the seventh and eighth grades, who are a little more advanced on their instruments. It was an amazing experience and we were blown away by the excitement and enthusiasm. We thought we were going to have to win them over more, but they were really excited to see us and feel the music and let loose and get stoked about playing instruments.

Different schools have different priorities and some have no music programs, or they have one good music teacher keeping it all together. Did this school need your help?

LS: This school definitely needed our help. Right now it's almost singlehandedly being kept going and carried by one specific teacher and she's dedicated to getting the instruments, doing everything. The budget is really, really small. So we're trying to make this part of our tour schedule and we're trying to specifically hit up schools where we're making the biggest difference, schools that have no or very little music programs. Because it's only one day there's only so much they can learn from us. But maybe they'll think about music differently and maybe they'll take something like that a little more serious.

How did it work when you did the small group sessions?

Nick Ferraro: It's funny because we have pretty much the same types of instruments as the standard North American concert band in a school. So we have a trumpet player, and trombone and sax and woodwinds and percussion and all that. It also helps sell it to the schools. If we were a rock band, they'd be like, "What? Are you guys going to teach our concert band about guitars?" The music they're checking out, modern pop music from hip-hop to pop, it's generally not made using the instruments students are playing in school. In school, they're only seeing it in a symphonic and concert band setting, but we're trying to show them, especially a school with existing programs, if you're playing trumpet or trombone that there's a space for that in modern music. It's just not always super-apparent.

Why is it important for the band to contribute like this?

LS: It's been an idea that's been brewing for a couple years and as we get a little bit more successful it feels like a responsibility because all of us are products of not-well-funded music education, but passionate people [behind those programs] are the reason why we're still playing music today and why we're still enthusiastic about it. In Kingston, when we went to J.G. Simcoe, that was literally an extra two hours in the afternoon that we had free already. The difference it makes for other people versus the cost is just, like, you gotta do it.

What do you hope young people get out of this?

NF: Overall ,just trying to make music a fun, enjoyable, accessible and social activity. I also feel like there's a benefit to working on an instrument that applies to non-musical settings. On discipline, on honing creativity, on self-expression, of creative collaboration in groups. There's just a lot of extra musical lessons that could be learned there.

How did The Tragically Hip figure into this visit?

NF: We have a couple mutual friends with [The Tragically Hip] guitarist Rob Baker and he had come to a couple of our shows in Kingston and we had chatted with him a little bit. And the woman who set us up with J.G. Simcoe apparently knows Rob Baker as well just from being in Kingston, I guess. Apparently they heard about our visit and were super-stoked about it and were talking about how cool it was.

LS: They were talking about joining or coming to the next thing we do in Kingston or being part of it somehow, which we're super-stoked about.

What do you hope to do going forward to expand on this idea?

NF: We want to be adaptable, but we also want to learn a lot more. We're just getting this off the ground and there are so many different ways it could go. We're going to a conference [Jan. 17], at least the two of us are, the Coalition for Music Education. It's a symposium for music education. It was really strange, especially talking to the teachers after, and even for ourselves asking, "Why we didn't do it earlier?" It's so easy integrating into a tour schedule. And there's so many different ways schools are willing to receive it. You can put on a show. Literally just that, 45 minutes for the kids, you talk a bit, then you leave. You don't have to do the whole clinic. You're still bringing something. You can be in and out in an hour or you can spend a whole afternoon. And hopefully we can get other artists talking about it and getting as many schools as we can.

And then hopefully getting real sponsors on board. Yamaha Canada sponsors so many things. Just to get someone like them, and do things like, "Yamaha is giving instruments to a school..." and just spiraling it. We don't know what we're doing. We're just trying to do it. We're not educated on how to do this stuff. We're just trying to get into that.

Speaking about lessons, you're a nine-piece band that's been on the indie touring grind. That's a hugely difficult thing to do with a group that big. What are some of the things you've learned along the way?

LS: For the me the biggest thing is working with others. As hippie as it sounds, I feel like musicians who have done the tour grind, after that part of their lives is done, could literally do anything and should be hired by every company possible because of their teamwork and team-building skills. There are no clearly defined rules on tour, but people will fall into roles with what they're doing. Everything's up for debate in a good way, and it's just how to work well with others and how to be a good person because you're seeing and interacting with people at your best and at your worst. You've had three early morning flights in a row and it's like your body and spirit is crumbling and there's a problem at soundcheck and you have to learn to be a good person through it... but you do. After things like that every other human interaction seems so much easier.