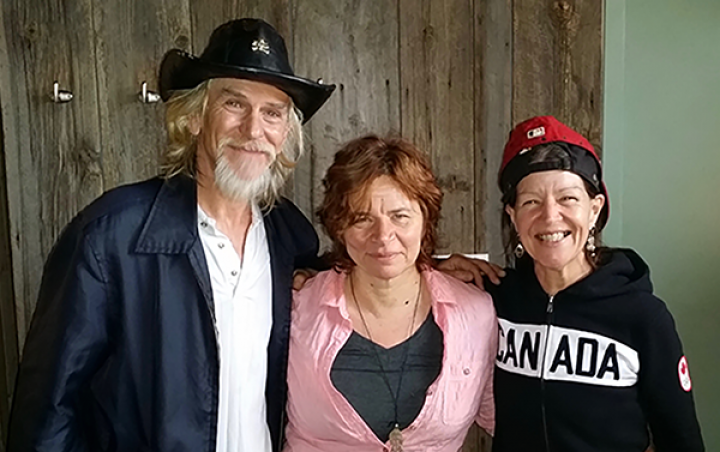 When Shelley Saywell’s 2015 documentary, Lowdown Tracks, earned rave reviews and awards at its initial screenings, there was an unexpected consequence — the release of the soundtrack last month. The film, underwritten by TVO and the Canadian Media Fund, raises awareness for the plight of the homeless in Canada, using the example of several Toronto street musicians, or buskers, to depict the diversity of the individuals and the reasons for living off the grid.

The audience’s response to the musicians — Woody Cormier, Bruce Bathgate, Maryanne Epp, Katt Budd and Anthony Van Zant, plus The Railyard Ghosts — and the music, at every screening, Segato tells Samaritanmag, was “immediate” and “powerful.”  Many of the songs depict the realities and harshness of life on the streets. The quality of the material is often astounding.

Just over a year later,  the Songs From The Lowdown album (plus Segato’s “Hole in the Wall” from her latest album, Invincible Decency) has been released with almost all the proceeds going directly to the buskers themselves. The CD sells for $16.63 (inc. tax and shipping).

The Canadian Alliance to End Homelessness (CAEH) has reported that Canada’s population has increased by almost 30 percent in the last 25 years, while the annual federal investment in housing has dropped by more than 46 percent. Social programs for the homeless costs Canadians over $7 billion a year. It would cost much less to invest in housing.  Over 1.5 million Canadian households are living in un-affordable or substandard housing. More than 235,000 Canadians will experience homelessness this year alone.

Tim Richter, the president and CEO of CAEH is quoted on the TVO website saying, “Lowdown Tracks is so important because it injects hope, purpose and a critical sense of urgency to the work we are doing and rallies people to take action." The entire film can be seen on TVO.org and many clips are available on YouTube. To date, Lowdown Tracks has had 26 screenings in eight provinces/territories. To find or book screenings go to: www.lowdowntracks4impact.com.

Samaritanmag spoke with Segato about the project, how we need to view the homeless through a different lens and how the people in the film use music to heal themselves.

How did this all begin?

It’s been almost four years since we started the project. Here’s just a small piece of back story: In 2007, I spent six months putting together a show called House Party, which was a big event meant to re-frame the way people see housing-challenged or homeless people. The idea was to bring people onto the stage and the band Parachute Club would play with them. It was Dec. 8, 2007, and it was one of those really magical nights. We sold out; there were 800 people; and we fed 300 homeless people that night. My friend, who is a documentary filmmaker, Shelley Saywell, was at the event and she said, “Oh my god, Lorraine, this is like The Band doing The Last Waltz. This is such a magical, amazing event. Could you — would you — do this again? And I want to film it.” I said, “Sure,” but you know how it works with films, it took years for her to get the funding. By the time she got the funding, many years later, we had to re-think our project. We couldn’t do it the way I had done it before. Shelley saw the promise of it, the idea of music and artists healing. 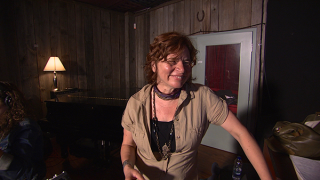 There are many other charities out there dealing with the issue. How is it that you teamed up with the Canadian Alliance to End Homelessness?

They came to us. [At one of the early screenings] we met a guy named Tim Richter, who is the guy running the 20,000 Homes campaign that he started last year out of Calgary, Alberta. He’s got all manner of people involved to figure out a way to build and to find 20,000 homes for 20,000 homeless people. Now keep in mind that we have 235,000 homeless people on record. We made an agreement to partner and do our best whenever we have a screening to mention 20,000 Homes and we have their logo on the CD cover because we want people to know we’re in affiliation with them. It’s the best way we know how to market their campaign and our campaign to bring awareness to the situation.

The movie was more about the predicament of homelessness, in general. The fact that the people portrayed were musicians was incidental to the purpose.

That’s right. The original idea was to re-frame the way people see homelessness and the problems of it, to give them a different perspective. We’re stuck in the groove about what that is. We’re stuck in the groove that it’s only about mental illness. It’s only about people who are lazy. All these grooves that we’re stuck in about how we see homelessness and the problem of it. What we wanted to do was to figure out how to show that, and we came across all these people on the street — and it wasn’t just people on the street that we interviewed, we interviewed a whole bunch of people in the process of doing the film — and what we ended up doing is zoning in on the people who happened to be street buskers as well, who happen to be using their music to heal themselves and keep themselves as stable as they could during their difficult times.

When did you recognize that an album for fundraising could be spun off from the film?

The response of the audience to the music in he film was immediate and very powerful. People were all, “What can I do to help? Where can I buy this music? I want to support these people in some way.” So, then we had to figure out a way to raise money to do a CD. We did a very small Indiegogo campaign on the night that we screened the film for [Toronto] mayor John Tory, and then an angel investor came in and said I’m going to give you the money to put together the CD. We had no idea that people would respond so positively to the music.

So we thought, here’s this second layer for the campaign that allows us an opportunity to discuss homelessness, before National Housing Day, and there is a campaign at this particular moment called [the 20,000 Home Campaign by] the Canadian Alliance to End Homelessness and they want to build 20,000 homes for 20,000 people. The CD also allows us to organize what we call Impact Campaigns with screenings in churches, in educational institutions, in organizations that support the cause. The costs of some of the screenings have been underwritten by the Slaight Family Foundation [the Catherine Donnelly Foundation and Place2Give Foundation also provided support]. We are now an official partner of the 20,000 Homes campaign that is run out of Calgary. We are using our CD to flip some attention their way. 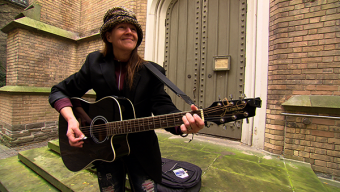 Our larger message is about getting the idea out there that music is healing and that music and art are really significant components in figuring out how to deal with the trauma that comes from being homeless. These are just a few of the many, many people traumatized by the housing crisis. This is a very real, authentic look into their isolation, their world, their despair and their hope. The hope is there, too.

Will all the proceeds from Songs From The Lowdown go to the musicians?

Yeah, it goes to them.  Well, we have to keep a little bit aside so that we’ll be able to reproduce the CDs when we run out. Just for the cost of manufacturing -- we didn’t have an angel investor for that! We have to keep the smallest amount in order to administer the project. They’ll end up getting more back from the CD than any professional musician receives from iTunes, that’s for sure! Also, we’ve given each of them something like 120 CDs so they can sell them on the street for any price they can get. That’s a street value of almost $2000 that they can put right into their own pocket. When we do screenings we also try to get honorariums for them to come and perform. And all along, even during the film, we paid them. We bought Bruce [Bathgate] a banjo, even though it got stolen. Shelley Saywell, the director, and Deborah Parks, the producer, are the two most extraordinary filmmakers/people I’ve ever worked with, because of their dedication. They fed these folks, they’ve underwritten the cost of so much stuff and given [the musicians] little bits of money. They’ve done as much as they possibly can to change their lives a little bit. Without the windfall of a lottery, there’s only so much we can do, but we can get their stories out there.