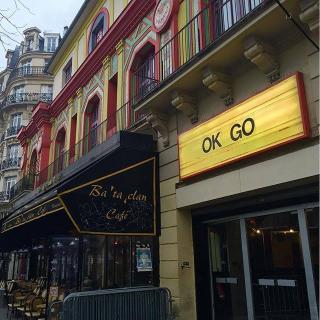 When terrorists attacked the Bataclan theatre in Paris, France killing 89 people and wounding another 200 during an Eagles Of Death Metal concert on Nov. 13, the response was swift and stern.

Two days later the French military launched air strikes against Islamic State of Iraq and the Levant (ISIL) targets in Syria. The music community also made its own gesture when U2 and Eagles Of Death Metal reclaimed the Bataclan stage in a performance on Dec. 8.

Meanwhile, another musician intimately familiar with the 151-year-old theatre also had something to say about it. Damian Kulash Jr., best known as the lead singer for the smart pop band OK Go with its amazing choreographed videos, recorded and released the song "Bataclan" as a free download on Nov. 21. Meant as a "prayer for peace," the intimate acoustic song is also now available on iTunes and Spotify, where any profits the song generates will be donated to USA for UNHCR, a charity that helps and protects refugees and people displaced by violence, conflict and persecution.

Kulash Jr. explained to Samaritanmag why he created "Bataclan."

You've played Bataclan in the past. How close to home did the terror attacks in Paris feel?

The attacks felt incredibly close to home. I was sort of ashamed, actually, because I’d like to believe that such an atrocity would be equally horrible and equally devastating, regardless of who and where the victims are, but the fact is: when you know the scene and setting so intimately, the whole thing becomes a lot more real, and a lot more awful. And it’s not just that one physical space, it’s the particular world of a rock show. I’ve spent thousands of nights in exactly the bubble that those people were in, a little world of joy and wonder and noise and celebration and human connection. I know its nuts and bolts, how it’s made, the ways that the people in the front row jump and the people in the back row sway. That world is home to me, so when the attacks happened, I felt the horror much more vividly than I have before.

Why did you make this song?

I am a person who is easily seduced by logic; I usually default to the position that reason and rationality are the best tools for dealing with the world around me, I think my brain should be able sort through it all and come to some understanding. But of course I’m wrong about that, or at least there are serious limitations. The world always exceeds the bounds, it’s always too complex and nuanced, and that’s where music comes in. When I’m faced with such intense emotions, feelings pulling so many directions at once — fear, compassion, anger, love, horror — it feels like music offers a window. It’s a sort of communication or connection. A song creates a space where all of those emotions make sense together, and you can share it with other people and hope that when they’re listening, their own ball of confusion and love and rage seems to make sense, too.

One of scariest aspects of all this was the target — music and music fans. It's a position the often open-minded, often-welcoming music community has rarely found itself in. How difficult is it to not let the fear win and to maintain that specific type of good spirit that makes our music world so special?

Individually, we all have to balance our fear with our trust, our righteousness with our humility, and our rage with our calm, but I don’t think we have to worry that the music community will be truly weakened by something like this. Yes, it’s a little scarier to go out and be in a large group of people right now, but the very reason we do it is to feel the connection of something bigger and more magical than the echo chambers of our own personal minds. That feeling is totally antithetical to fear and hatred.

Musicians have often been our conscience in times of crisis, things like Woody Guthrie performing for striking workers at a steel mill, James Brown calming down Boston after MLK's assassination, Neil Young making "Ohio." Why should people consider peace when they've been hurt like this?

I guess there are a lot of reactions you can have to such terrible events, and reading the news, you can feel parts of the world stiffening with retaliatory anger. To me, though, the overwhelming feeling is just an intense longing for peace. The perpetrators of these atrocities felt such terrible hatred that they walked into a room of people joyfully singing and dancing, and they wanted to kill them. That is utterly bewildering to me. I have no idea what that type of hatred feels like, and I desperately wish it didn’t exist. So to me, the desire for peace doesn’t feel like a passive, measured response; it's the immediate urge: reduce the evil. Do not feed the darkness.

What do you hope your song will achieve?

In the intense ball of emotions that surrounds an event like this, it’s hard to know what to do — how to square up all of the tumult inside of ourselves. Songs somehow help align it all — they’re little worlds in which all the the confused emotions make sense together. Being able to create a little world like that and share it with other people helped me. I don’t expect the song to achieve anything, really — I doubt that vey many people will even hear it. But for those who do, I hope it offers a sense of connection, and a little world to sink into where all of the emotions around this tragedy make a little more sense together.