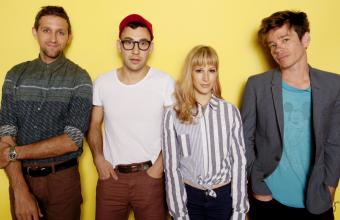 Even before Fun.’s 2012 album, Some Nights, took off, selling more than 2.5 million copies worldwide, the band was involved with various causes that helped lesbian, gay, bi-sexual, transgender and queer (LGBTQ) people.

When the album was released, they were selling t-shirts that read: “It's all fun and gay ‘til someone loses their rights.” They are still available for $20 (U.S.) on Fun.’s web site.  Proceeds go to Montreal’s Revel and Riot to help promote LGBTQ rights, awareness and equality.

“It’s kind of like a satellite for LGBGQ community. We collect proceeds from shows and stuff and we dish it out,” Reuss  — who has just released a solo album, Grand Romantic — tells Samaritanmag.

“Things have gotten obviously crazier as the success has happened and that, of course, has given us more opportunities to give back,” he says. “So that’s what we’ve done and we’re very proud of what we’ve been able to accomplish. We’ve been doing a lot of work in Detroit and homeless shelters for LGBGQ youth. It’s amazing.”

On the The Ally Coalition web site, in all capital letters, it says: SUPPORT LGBTG EQUALITY and that donations made to their local partners has, so far, reached $202,000 (U.S.)

The stats current being logged on the landing page are for TAC’s new fundraising initiative called Time2StepUp with Bleachers!

Bleachers is Jack Antonoff’s other band, which he fronts. They are currently on tour in the U.S., then Japan, Europe/UK, and back to the U.S., with a one-off show in the middle in Canada (see dates here).

“Want to meet Jack Antonoff? Or win Ben and Jerry’s ice cream or Pandora One for a year? Along Bleachers’ summer tour, fans are taking actions and raising funds for organizations across the country which support vulnerable LGBTQ youth,” the fundraising contest begins, then outlines the two ways to win prizes.

“CLICK HERE TO START A FUNDRAISER The money you raise on Crowdrise will be donated to local organizations like the Ruth Ellis Center of Detroit and Youth Spirit Artworks in Oakland. Fundraisers are rewarded with exclusive prizes (like meeting Jack Antonoff; a year of Ben & Jerry’s Ice Cream or Pandora One). CLICK HERE TO GET STARTED!

“CLICK HERE TO DOWNLOAD TIME MACHINE: Earn time by tweeting an OpEd, sharing a photo, or volunteering with one of our partners across the country. The more time you earn, the more prizes you can win (like a year of Ben & Jerry’s Ice Cream or Pandora One). CLICK HERE TO DOWNLOAD!”

A third prize has also been added for 25 participants of Time Machine and Crowrise: a year’s worth of free ice cream from Ben & Jerry’s.

In the early stages still, Time2StepUp with Bleachers! has, to date, raised $1614 (U.S.) and volunteers have donated 54 hours.  There are 125time machine participants, so far.  But on the same page, it says $2012 has been raised, so perhaps the updates are a little behind.

Fun has supported many LGBTQ organizations, including GLAAD, Human Rights Campaign, Revel & Riot, The Trevor Project, and Freedom To Marry.  Along with Rachel Antonoff, their mission with TAC is to engage their peers in the music, fashion and entertainment industry, to take action for LGBTQ equality.

“TAC believes that it is the responsibility of allies to support LGBTQ causes and fight against discrimination through education, awareness and advocacy,” it says on the site.

“Our mission is to create a coalition of allies that will aid and encourage our fellow artists and people from every walk of life, to use their voices and influence to end discrimination against LGBTQ people.”

In 2012, while doing promotion for their forthcoming album, Some Nights, Jack told Samaritanmag, “We’re pretty serious on gay rights. That’s our thing because we’re all straight and we get asked all the time if we’re gay, which is really offensive in itself, the assumption that you have to be gay to care.

“That also shows you where we’re at — that people assume that it isn’t a straight problem, but it’s no different than any other human rights issue and until we all care, then we’re letting [discrimination] happen.”

He added: “A lot of people in America are pretty uneducated in general. There’s a lot less hate and a lot more ignorance is what we think.  So whatever small part we can play in delivering what we feel is really positive information to our audience is good.”