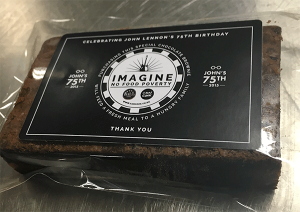 For the next year, chocolate brownies commemorating what would have been John Lennon’s 75th birthday will be on sale in Liverpool to raise money for Imagine No Food Poverty, a campaign led by Lennon’s sister, Julia Baird.

“We’ve sold around 1300 so far, which equates to around 530 meals for hungry people,” Laura McCuminsey, development manager, at Can Cook, told Samaritanmag via email.  “They will be available to buy over the next 12 months from the Beatles Story shop and cafes. We will have boxes of brownies available over Christmas. These will also be available in the Independent Liverpool Christmas Hamper.

“We’re now approaching new retailers and offices to join in the campaign over the next year, our aim is to generate 10,000 meals.”

Established in 2007, Can Cook — which is baking the brownies — is a social initiative organized by Five Children & Families in answer to requests from families that wanted to improve their health by improving their cooking skills through cooking healthier foods.

“For every brownie that is purchased, Can Cook will give towards a fresh meal to somebody in food poverty, making a direct connection to John’s early life to where food poverty is today here in the UK,” it reads on Can Cook’s web site. “As the campaign develops the aim is to feed thousands of hungry people, good healthier food.”

The fundraising campaign launched Oct. 9 with an even bigger chocolate dessert, a guitar-shaped cake — created by Can Cook's Robbie Davidson and produced by cake designer Rachel Nugent —  made from chocolate rations reserved for students enrolled in the Can Cook program. “It is a replica of the Rickenbacker that [John] played on the Ed Sullivan Show,” says McCumiskey.

The cake was purchased for £2500 (CAD $5000) at The Beatles Story exhibition by Canadian promoter Jeff Parry, whose productions include RAIN – A Tribute to The Beatles and Let It Be – A Celebration of the Music of The Beatles. The cake was on display at Royal Court Liverpool theatre where Let It Be is playing and theatregoers could have their photo taken with it if they purchased a brownie for £2 (CAD $4).   It is now in the Can Cook studio, says McCumiskey, until Parry decides how to transport it and to where.

Lennon’s sister appears in a promo video explaining her brother’s connection to chocolate cake and poverty.

“When John was young, it was war time and food was scarce so our family used to save up our chocolate rations so that when John’s birthday was coming up we could make him his favourite cake,” Baird says. “He loved chocolate cake and this year as it would have been John’s 75th birthday I wanted to tell the story and tie it in with fighting food poverty in his hometown of Liverpool and in the UK today." 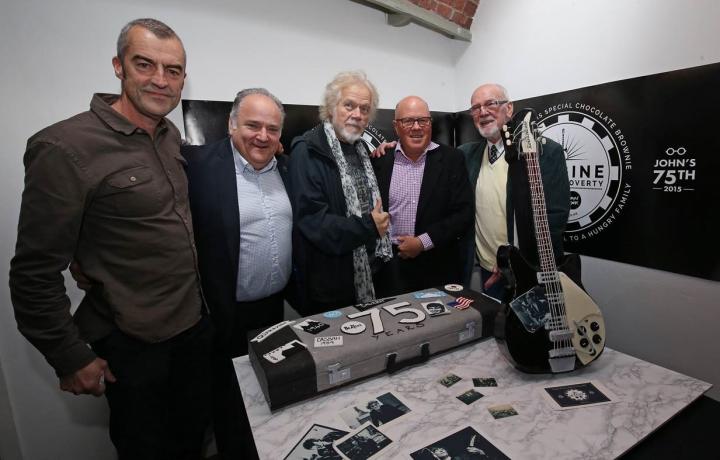