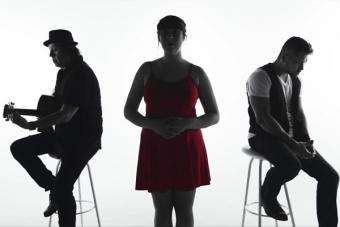 One of the most important justice, cultural and human rights issues in Canada right now revolves around cases of missing and murdered indigenous women and girls (MMIWG). Winnipeg indigenous pop band Indian City has addressed this on their new single, "Through the Flood."

The song, featuring Juno Award-winning Winnipeg folk singer Don Amero on vocals, pulls no punches with its lyrical content. Starting off with the lines "Dark secrets/Darker lies/Fading heartbeat/Fading cries," the song eventually reaches a call to action, "Brothers stand/Sisters too/I am right here/Next to you."

"This was a very difficult song to write, but it is very important to continue the dialogue around this tragic issue," said Indian City band leader and Eagle & Hawk member, Vince Fontaine, in a press release. "We want to remember those we have lost, and share the weight with families in pain. Socially, we want to foster a future of healing and positive change. Politically, we want to continue the conversation of equal weight to tragedies across all communities."

Fontaine also enlisted the help of his 19-year-old daughter Gabrielle Fontaine to contribute to the song.

"Our song describes the hope emerging as we all stand together with these families in the midst of the healing process," said Gabrielle Fontaine. "I am honoured to have been a part of bringing this song to life, and collaboratively, finding the words to say through song, we hope to bring more people together to stand with these families."

The band has three albums, including Supernation (2012), Colors (2014) and Here and Now (2017). They'll perform "Through the Flood" live for the first time on July 29 during the opening weekend of the Canada Summer Games on July 29 at Indigenous Voices, Songs and Sounds, a public event at the Canadian Museum for Human Rights.

Watch the "Through The Floods" video