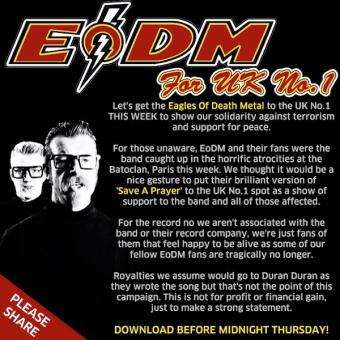 Duran Duran frontman Simon LeBon will donate all the band's proceeds from Eagles of Death Metal's cover of their 1982 hit, "Save A Prayer," to something "useful, peaceful, and uniting," after some EODM fans tried to do some good in the aftermath of the Nov. 13 Paris terror attacks that left 128 dead.

The Eagles Of Death Metal concert at Paris' Bataclan theater was one of the focal points for the terrorist attacks, killing at least 89 and wounding over 200.

The next day EODM fans created the "Eagles Of Death Metal For No. 1" Facebook fan page for the express purpose of getting EODM's cover of the Duran Duran hit "Save A Prayer" to No. 1 on this week's U.K. singles chart.

"For those unaware, EODM and their fans were the band caught up in the horrific atrocities in Paris this week," said a post on the fan site. "We thought it would be a nice gesture to put their brilliant version of 'Save a Prayer' to the U.K. No 1 spot as a show of support to the band and all of those affected.

"For the record no we aren’t associated with the band or their record company, we’re just fans of them that feel happy to be alive, as some of our fellow EODM fans are tragically not now.

"Royalties we assume would go to Duran Duran as they wrote the song but that’s not the point of this campaign. This is not for profit or financial gain, just to make a strong statement."

Music fans in the UK and around the world appear to have gotten the message. As of yesterday a post on the U.K.'s Official Charts website said EODM's "Save A Prayer" had rocketed to #44 and was rising. This week's number one single will be revealed Friday afternoon on BBC Radio 1.

Even better, though, was the response from the originators of the song, Duran Duran.

Band lead singer Simon Le Bon tweeted on Nov. 16 that Duran Duran will "will donate all proceeds due to us, from this version. Considering options that are useful, peaceful & uniting."

Eagles Of Death Metal haven't commented publicly about the campaign, though they did release an official statement yesterday:

"While the band is now home safe, we are horrified and still trying to come to terms with what happened in France. Our thoughts and hearts are first and foremost with our brother Nick Alexander, our record company comrades Thomas Ayad, Marie Mosser, and Manu Perez, and all the friends and fans whose lives were taken in Paris, as well as their friends, families, and loved ones.

"Although bonded in grief with the victims, the fans, the families, the citizens of Paris, and all those affected by terrorism, we are proud to stand together, with our new family, now united by a common goal of love and compassion.

"We would like to thank the French police, the FBI, the U.S. and French State Departments, and especially all those at ground zero with us who helped each other as best they could during this unimaginable ordeal, proving once again that love overshadows evil.

"All EODM shows are on hold until further notice.