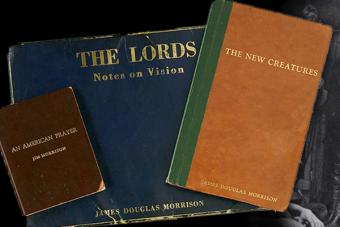 A new auction is lighting fans of The Doors imaginations on fire as a collection of three rare poetry books by the band's late lead singer Jim Morrison have been put up for bidding on eBay.

The collection includes The Lords: Notes On Vision and The New Creature, which were both published in 1969 and limited to a print run of 100 copies and 1970's An American Prayer, which had a run of 500 copies in its first edition. The copies were personal gifts from Morrison to his close friend January Jansen, who died in 2010. Bidding for the package starts at $5,000 US ($6,930 Canadian) and all proceeds from the sale will go towards the Grammy Foundation.

"We are offering for auction a rare collection that include all three of Jim Morrison’s self-published books of poetry from the estate of January Jansen close friend, clothing and jewelry designer, rock star godfather and wingman of Jim Morrison," says a description of the books on the auction page.

"Each book was published separately between 1969 and 1970 and each was only published in a limited run. Individually, each book is extremely rare and sought after by collectors and extremely difficult, if not near impossible to find. A complete set of all three books, to our knowledge has never been offered, but a complete set that was received each as a gift from Jim Morrison directly to the same individual that remained intact has not come to market previously. These books were treasured and held dear by January Jansen until his passing."

Appropriately for an auction on old, rare books from a dead rock star, the money the GRAMMY Foundation receives will go towards its stated goal to "preserve our nation's recorded sound legacy."

Last year some of the projects the foundation funded included $20,000 US ($27,720 CAD) to Brandeis University to digitize and preserve recordings from comedian Lenny Bruce, $20,000 US ($27,720 CAD) to the Association for Cultural Equity to digitize a 1941–42 Library of Congress-Fisk University research study featuring the first recordings of musicians Muddy Waters and David "Honeyboy" Edwards, as well as $12,200 US ($16,909 CAD) to the Arhoolie Foundation to digitize and make available classic interviews with the likes of Howlin' Wolf, Lightnin' Hopkins, Lydia Mendoza and Clifton Chenier.

Interested parties will have to wait until the auction concludes on Feb. 25 to determine if they've broken on through and scored the winning bid when it's over.