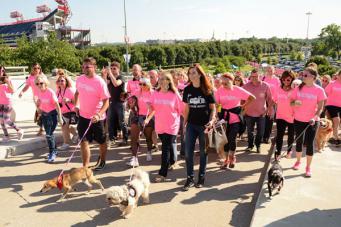 Lambert, who's a passionate animal advocate, operates MuttNation Foundation, whose goals are to end animal cruelty, neglect and homelessness. Founded in 2009 by Lambert and her mother, Bev Lambert, MuttNation supports things like spay and neuter campaigns, provides funding to animal shelters across America, supports the Redemption Ranch in Tishomingo, OK and operated the annual charitable Cause For The Paws event.

At CMA Music Fest, Lambert led approximately 1,000 fellow animal lovers on a MuttNation March through Nashville to kick off the fest on June 8. From there, the organization set up a mobile adoption unit at the fest titled, the MuttNation Foundation Adoption Drive at CMA Fan Fair X. This was where the 60 dogs found their new homes.

The Lamberts wer particularly excited to have a hand in facilitating the new adoptions.

"WE DID IT!!!!! Thanks to all of you our last four MuttNation Mutts found a new home....for a grand total of 60 PUPS IN FOUR DAYS!!!" said a message on the MuttNation Facebook page. "Our hearts are bursting with joy!!! THANK YOU for helping us make this happen!!!! Our fans are THE BEST!!!!"

Lambert comes by her support of animals genuinely. She has a number of pets, including six dogs, a flock of chickens, two pot bellied pigs, three minihorses, three horses and three cats.

In a post on her official website, Lambert called the adoptions the best part of the fest for her.

“I am so grateful that all these amazing dogs found their forever homes,” said Lambert. “Marching with so many amazing fans and fellow animal lovers was really a highlight of CMA Fest for me.”

The Mutt March is far from the only initiative Lambert has going to support her furry friends. Proceeds from her branded MuttNation Fueled by Miranda Lambert pet products will continue to be used to fund her MuttNation work.