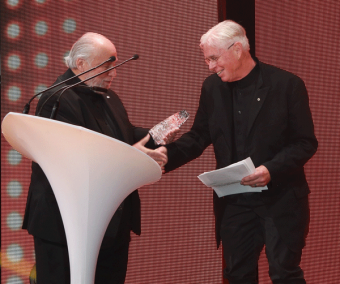 Bruce Cockburn, who recently received the Allan Slaight Humanitarian Spirit Award, has added another cause to his life-long interests — suicide awareness and prevention. The famed Canadian folk singer-songwriter who has supported everything from environmental protection to human rights just filmed a public service announcement for Thunder Bay Ont.’s Collateral Damage Project.

In the 2-minute video (watch below), he begins, “Health Canada states that 90 percent of those who die by suicide had a diagnosable mental health disorder. To prevent suicide, we need to talk about it, and deal with the issues that lead up to it…”

Founded by Scott Chisholm, who lost his father to suicide, The Collateral Damage Project aims to create a pro-active dialogue on suicide through a book and exhibit of images and stories of those who have lost loved ones and friends to suicide. The organization also advocates for changes to curriculum, policy and legislation on how suicide is talked about.

“Why Bruce? He’s never been afraid to write about and speak the truth even at the risk of making his audience uncomfortable,” Chisholm tells Samaritanmag of recruiting Cockburn as a spokesperson. “Bruce has created dialogue on many difficult issues that are plagued in stigma and suicide is one of those.

“Has he been affected directly? Not directly but a few friends — those are his words. During our conversations, Bruce was shocked by the rate of suicide for men — ages 40 to 59; 32.5 out of 100,000 versus prostate cancer, which is 19 out of 100,000 — and feels strongly about the need to address the rates of suicide among Inuit and First Nation youth.”

STORY CONTINUES AFTER THE PSA:

Cockburn, who was honoured May 8 with the Allan Slaight Humanitarian Spirit Award, was introduced onstage during the 2014 Canadian Music & Broadcast Industry Awards presentation by both his long-time manager Bernie Finkelstein and Gary Slaight whose father is named after the award.

The Slaight Family Foundation also donated $30,000 to two of Cockburn’s preferred organizations, $20,000.00 to the Unitarian Service Committee (USC) and $10,000.00 to Unison Benevolent Fund, the relief program for the Canadian music community.

“Bruce Cockburn has been kicking at the darkness for over 40 years now, attempting to right the wrongs and give voice to those that have none,” said Gary. “My father Allan and I both respected Bruce as an artist and humanist since his early coffeehouse days on Yorkville Avenue. My dad was so impressed with the highly successful United Way charity concert that Bruce would headline at Toronto Convocation Hall back in the 70s that he personally presented Bruce with an award.

“The two of us have watched and listened like the rest of Canada as Bruce progressed to become not only a successful international recording artist but equally important, a songwriter with a sense of purpose, shining a light on dark issues. To borrow a lyric from another one of his songs, Bruce continues the fight to let the bad air out.”

Said Finkelstein, “As we know, Bruce has travelled to the far corners of the earth and to the far corners of Canada in his quest to make the world a better place. But after all is said and done, it’s his songs that make the difference. And in these digital days, the songs travel near the speed of light, around the world, over and over again, each day, not only moving near the speed of light, but also bringing light to the world.

“So whether it’s the refugees on the Rio Lacantun in ‘If I Had a Rocket Launcher,’ the Haida in British Columbia and the fight for their rights in ‘Stolen Land,’ the environment crying out for relief and attention in ‘If A Tree Falls,’ or just two children in a playground, growing up under the cloud of the cold war, in ‘Lovers In A Dangerous Time,’  it’s these songs, and ever so many more, that make Bruce Cockburn so special.”

When Cockburn took the stage, he said he was honoured to receive the humanitarian award (it’s not his first; Cockburn received the Juno Awards’ inaugural Allan Waters Humanitarian Award in 2006), but downplayed his philanthropic nature and accomplishments.

“I don’t know if I’ve done anything special to merit this,” he said. “I think each of us has a moral responsibility to share what we can of our material and personal resources, especially those of us for whom life is less precarious than it is for many of our sisters and brothers. The world is full of pain and anything we can do to lessen the amount of it, let’s do it.

“When I was young, I didn’t think much about it other than to feel sorry for people going through hard times.  As I travel though and saw up close how hard times can be, that started to change. The human condition has a built in misery quotient but there is often an identifiable cause and effect as well. In the developing world, I found over and over again that the economic structure that allows me to live as I do is built on the requirement that the poor live as they do.  It was a disturbing discovery. I understood that I had to make a choice between ignoring that fact and doing what I could to offset it. Ignoring it seems jut plain wrong,” he continued.

“My parents provided me with a pretty strong moral framework. The first time I received a sizeable amount of money it was clear that I had to share some of the bounty. I looked around for some trustworthy entity to give it to. My then mother-in-law was very close friends with a woman who headed a charitable agency called the Unitarian Service Committee of Canada, Dr. Lotta Hitschmanova. She was a colourful, warm and utterly committed person of great intelligence and energy. I felt I could rely on USC to put my ill-gotten gains to good use. That was in 1970 and things just went on from there.

“From periodic donations, my relationship with the NGO community evolved to where it included travel to some of he places where money becomes action, Central and South America, parts of Asia and Africa. I had adventures, encounters, which fed songs, which led to more travel.

“Now and then I get asked what current issue I’m working on,” Cockburn concluded. “Well, for one thing, I’m not the one doing work. I just try to say what I see, but in any case, there’s really only one issue – how we treat each other and by extension how we treat the planet that gives us life. Everything, all the specifics, flow from that. We are under orders to love our neighbour. Can we tell ourselves we’re doing that if we stand by and watch her starve because of climate change or be victimized by repressive or corrupt leaders raking what they can off the system. There’s only one boat and we’re all in it together.”