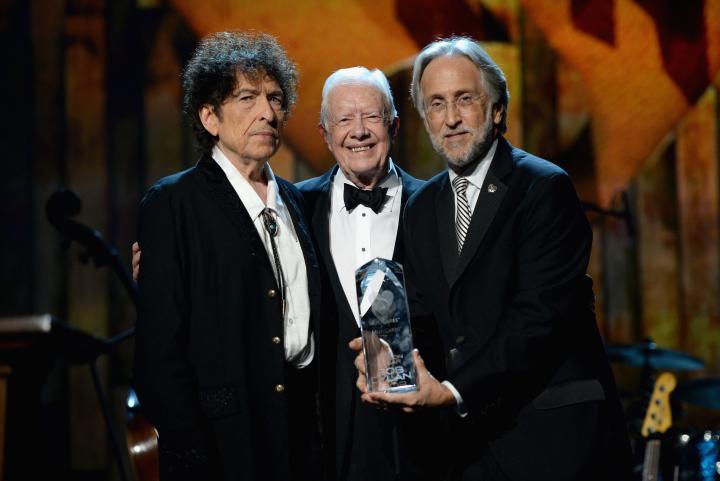 Bob Dylan’s acceptance speech for MusiCares Person of the Year should be required reading for any neophyte songwriter or artist in general — and was fortunately transcribed in full by Randall Roberts of the Los Angeles Times — but he didn’t leave the stage Friday evening at the Los Angeles Convention Center without giving props to the non-profit organization that is a saviour for many American musicians without healthcare.

“Anyway,” he said after talking at length about his connection to early songwriters and the reception by critics to his music, “I'm proud to be here tonight for MusiCares. I'm honored to have all these artists singing my songs. There's nothing like that. Great artists.They're all singing the truth, and you can hear it in their voices.”

According to The Grammy web site, “MusiCares provides a safety net of critical assistance for music people in times of need. MusiCares' services and resources cover a wide range of financial, medical and personal emergencies, and each case is treated with integrity and confidentiality. MusiCares also focuses the resources and attention of the music industry on human service issues that directly impact the health and welfare of the music community.”

“I'm proud to be here tonight for MusiCares,” said Dylan.  “I think a lot of this organization. They've helped many people. Many musicians who have contributed a lot to our culture. I'd like to personally thank them for what they did for a friend of mine, Billy Lee Riley. A friend of mine who they helped for six years when he was down and couldn't work. Billy was a son of rock 'n' roll, obviously.

“He was a true original. He did it all: He played, he sang, he wrote. He would have been a bigger star but Jerry Lee came along. And you know what happens when someone like that comes along. You just don't stand a chance. So Billy became what is known in the industry —  a condescending term, by the way — as a one-hit wonder. But sometimes, just sometimes, once in a while, a one-hit wonder can make a more powerful impact than a recording star who's got 20 or 30 hits behind him. And Billy's hit song was called ‘Red Hot,’ and it was red hot. It could blast you out of your skull and make you feel happy about it. Change your life.

“He did it with style and grace. You won't find him in the Rock and Roll Hall of Fame. He's not there. Metallica is. Abba is. Mamas and the Papas -- I know they're in there. Jefferson Airplane, Alice Cooper, Steely Dan — I've got nothing against them. Soft rock, hard rock, psychedelic pop. I got nothing against any of that stuff, but after all, it is called the Rock and Roll Hall of Fame. Billy Lee Riley is not there. Yet.

“I'd see him a couple times a year and we'd always spent time together and he was on a rockabilly festival nostalgia circuit, and we'd cross paths now and again. We'd always spend time together. He was a hero of mine. I'd heard "Red Hot." I must have been only 15 or 16 when I did and it's impressed me to this day.

“I never grow tired of listening to it. Never got tired of watching Billy Lee perform, either. We spent time together just talking and playing into the night. He was a deep, truthful man. He wasn't bitter or nostalgic. He just accepted it. He knew where he had come from and he was content with who he was.

“And then one day he got sick,” he recounts. “And like my friend John Mellencamp would sing -- because John sang some truth today — one day you get sick and you don't get better. That's from a song of his called ‘Life is Short Even on Its Longest Days.’ It's one of the better songs of the last few years, actually. I ain't lying.

“And I ain't lying when I tell you that MusiCares paid for my friend's doctor bills, and helped him to get spending money. They were able to at least make his life comfortable, tolerable to the end. That is something that can't be repaid. Any organization that would do that would have to have my blessing."

“I'm going to get out of here now,” Dylan concluded. “I'm going to put an egg in my shoe and beat it. I probably left out a lot of people and said too much about some. But that's OK. Like the spiritual song, 'I'm still just crossing over Jordan too.' Let's hope we meet again. Sometime. And we will, if, like Hank Williams said, ‘The good Lord willing and the creek don't rise.’”