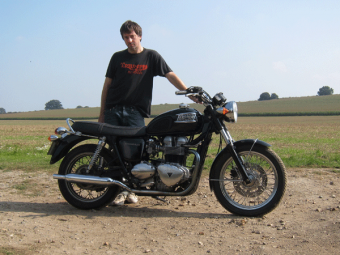 Blur guitarist and solo artist Graham Coxon is putting seven of his prized motorcycles up for auction through Bonhams auctioneers with all the proceeds going to the UK children’s charity The National Society for the Prevention of Cruelty to Children (NSPCC).

The bikes will be sold at the 21st annual Carole Nash Classic Motorcycle Mechanics Show, on Oct. 19, at Staffordshire County Showground, in Staffordshire, as part of Bonhams Autumn Stafford Sale.

“These bikes have taken me on a lot of wonderful adventures up and down the country,” Coxon said in a statement. “As a parent, it seems fitting that they should be sold to benefit the NSPCC’s important work in supporting and protecting children all over the UK.”

Blur, one of the biggest acts to emerge from the 90s Britpop movement with such hits albums as Parklife and The Great Escape, received a Brit Award in 2012 for Outstanding Contribution To Music. Coxon a multi-instrumentalist and also named the 15th greatest guitarist of the last 30 years by a BBC poll in 2010, has released a number of solo album and is also an accomplished visual artist designing his own cover art, as well as for Blur’s album 13.

In a press release from Bonhams, it calls Coxon’s 1968 Triumph Trophy 650 “the star” of the lot. The motorcycle was restored by the Bike Shed M.S, and went on to win the Best Classic award at the 2001 NCC South Cambridgeshire Custom Show. The guitarist bought it in October 2002, and ridden it only a few hundred miles, it says. It has an estimate of £6,000-8,000.

Paul Farthing, director of fundraising at the NSPCC, stated, “We are delighted that Graham has chosen the NSPCC to be the sole beneficiary of his exciting motorcycle auction. The money raised will help us to continue our vital work helping to protect children and prevent abuse through projects and services including ChildLine.”

ChildLine is the UK’s free, confidential 24-7 helpline and online service dedicated to children and young people.

Founded in 1884 (as the London Society for the Prevention of Cruelty to Children), the NSPCC aims to end cruelty to children in the UK. “The NSPCC needs to deliver the biggest impact it can, but our limited resources are only a fraction of the government and voluntary sector’s budget for children,” it reads on its website. “So all of our service, advice, support, campaigning and education activities are driven by these four principles:

“The NSPCC's local services will concentrate on seven important issues and groups of children most at risk,” it states.

Ben Walker, international director for Bonhams collectors’ motorcycles, said, “This is a great opportunity for fans of Graham and Blur, to not only take home an incredible piece of motorcycle machinery, but also know that the proceeds of the sale will go to a great deserving cause, the NSPCC. With almost 300 lots including over 170 motorcycles, this year’s Stafford sale will offer something for every enthusiast, with this particular collection adding a great charitable donation to the sale.”