Avril Lavigne isn’t letting Lyme Disease stop her from doing a world of good for others.  The philanthropic singer is still recovering from the debilitating illness that is caused by the bite of an infected blacklegged tick.  It took many months of visiting doctors until she received the welcomed diagnosis — she has talked about being bedridden and made to feel she was crazy and simply fatigued.

Since going public in April to People magazine to help bring attention to the disease, the Canadian pop star has continued to release music,  “Give You What You Like,” from her self-titled fifth album, and the non-album track, “Fly,” which was announced back in January as the theme for the upcoming Special Olympics World Summer Games, July 25-Aug. 2, and officially released as a charity single in April — 100 days before the start of the games.

Special Olympics is the world's largest sports organization for children and adults with intellectual disabilities, providing year-round training and competitions to more than 4.4 million athletes in 170 countries.  Last year, for her 30th birthday, Lavigne helped raise funds to send 30 of these competing athletes to the summer games.

“Fly,” co-written with her husband Chad Kroeger of the rock band Nickelback and Dave Hodges, is currently the arrival music in the first-ever Unified Relay Across America, for which some 20,000 people will have carried the torch over 46 days from Augusta, Maine to Los Angeles where the games are held. The song is played every night when the torch bearer arrives at his or her destination.

Lavigne, who started The Avril Lavigne Foundation in 2010 to provide support to children and youth living with serious illnesses or disabilities, talked with Samaritanmag about the foundation, “Fly,” Special Olympics, and Lyme Disease.

Getting there. It’s a process.

No. I wanted to partner up with them — I started planning it a year and a half ago —because they share a similar mission as the Avril Lavigne Foundation. But I was doing stuff with War Child and Make-A-Wish Foundation and whatnot and for a while wanted to start my own. I launched the foundation in 2010 and now here we are today.

Why did you want to start your own foundation? You’d been involved with charity since you launched your career.

Bryan Adams who also has his own foundation has said it’s a way to know where the money’s going and it’s more tangible because you’re part of it. Do you feel that way?

I don’t give my money to any organizations unless I know what they’re doing with it. I just wanted to do more than just a few things here and there. I wanted to take it to the next level. 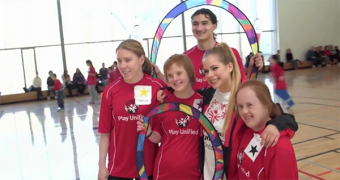 The video for “Fly” [co-directed by Lavinge and Robb Dipple] contains some great scenes with the kids. You have to watch it more than once to see all the cool moments, like the guy who made the basketball shot from so far away. What has it been like to meet these kids and see what they’ve been able to do with the disabilities that they have?

I just feel like I have a connection with them every time I spend time with them. It really touches my heart and they’re all very sweet. At the video shoot I met four athletes that I’m sending to the games. And they’re all so pure and so sweet and very inspiring and they don’t let their situation get them down.

Did you go to the Special Olympics facility in Shanghai to meet the athletes or were there other places you went?

I’ve been to a bunch of places worldwide, yeah. I went to Shanghai. I’ve had like 200 athletes come out to my shows in all different countries.

What is the facility like in Shanghai for example? Is it big? Are there different areas where kids are learning their respective sports?

It’s really huge and highly impressive. And I just went and they showed me all the different rooms where they learn and they also do games. The video wasn’t shot in Shanghai; it was shot in Toronto.  There was a gym and they had a bunch of athletes come out and play and I hung out with them.  For my 30th birthday [Sept. 27, 2014], I sponsored 30 Special Olympics athletes and helped out with that, fundraising.  Four of those athletes were there in Toronto.

And the other stuff in the video is stock footage?

INTERVIEW CONTINUES AFTER THE VIDEO:

For the song, did Special Olympics give you parameters like ‘We need a song not only as a theme song but for the torch relay or arrival?” Did they tell you that at the time or was that after?

I actually wrote it a while ago and I wanted all the proceeds to go to the [Special Olympics] foundation for the cause. I had already had it. But tailoring it was really special — it just made sense because it’s all about rising up and reaching up and finding inner strength. So it was the perfect fit for the foundation.

How does that make you feel that everyone that’s going to be doing this relay over 46 days is going to arrive to your song and get a boost from it?

Are you going to be there?

I’m working on it. I’m planning it out now. I’m hoping to perform but we’re working out the details.

Are you seeking more partnerships for the Avril Lavigne Foundation? How does it work? Do organizations apply to get assistance from the foundation?

Organizations can feel free to come to my foundation and approach us. That is how I launched it, partnering up with Easter Seals, and now I’ve just partnered up with Special Olympics.

Was there any learning curve the first year or do you have a really good team behind you with experience?

A bit. GPG, global philanthropy group, manages my foundation. So they do wonderful work and they really do a lot of organizing and know how to go through the proper channels and all that — they know how this works. But I have the dream and we set goals and I go with what moves me. And working with young people affected by serious illness or disabilities has always been something that I want to get involved with.

Is there a reason why?  Obviously we all want to help children, but I remember when I was in grade 7 or 8 I had a class at school where I went to volunteer with kids who had disabilities. Did you ever have anything like that, or was it your family, or just through your concerts and meeting kids with disabilities?

It was through the concerts when I was quite young, them wanting to meet me and me having that chance, and seeing how excited they were and the difference I could make. I just wanted to take it the extra mile.

Travelling around the world must really open your eyes to what help is needed and where.

There are a lot of people that have different struggles in life in all places. And that’s why for me, on my last tour, I started doing more work over in other countries. All these Special Olympics athletes that came to all my different shows in all the different countries, and having the courage to achieve your dreams, that’s universal.

Switching topics, for the last question, to Lyme Disease and bringing it to the public’s attention. What does the general public need to know in terms of the risks and how to get properly diagnosed?

You have to see a doctor who specializes in Lyme and is familiar with it because if they aren’t, you’re pretty much shit out of luck. And, unfortunately, it’s a disease that a lot of medical doctors aren’t being informed of or they’re not trained so a lot of people don’t know about it. Or they’re afraid to treat it to get their licenses taken away.

It’s not just Lyme Disease that you can get from a tick bite. A lot of people do not know that there are co-infections, like ticks can carry Lyme and other infections. It has to be properly treated by a doctor who knows what they’re doing, like I said.  It’s really hard in Canada; sometimes doctor’s won’t treat it; they’ll only treat for acute, which is for a month, and if you’ve had it you’re going to need several months’ treatment.

And they’re still trying to figure it all out, which is why I shared my story and will talk about it more in the future once I’m better and feel up to it because people need to know about it. It doesn’t just come from ticks. It can come from insects. Mosquitoes carry it and sand fleas. And all kinds of stuff.  There’s lots that people don’t know.

And it’s a long recovery?

Oh yeah! It depends on how long you’ve had it for. For me, I only think I had it for seven months before I started treating it. I’ve been treating it for six months now and I’ve got about two to three months of treatment left. But it’s pretty hardcore.

Can I put her name in?

No prob. Avril, thanks for talking to me.

Yeah and if you have more Lyme questions, send us an email. I’m more than happy through email to answer, just so I get the word out there. I’ll get you all the perfect answers so we can get the right correct info out there.