ArtsCan Circle Has Given Over 14,000 Instruments to Remote Communities 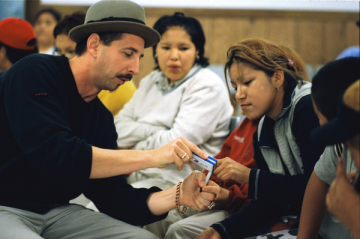 Mike Stevens was performing around the world and making a second home on the Grand Ole Opry stage in Nashville, Tenn. as one of North America’s foremost harmonica players when an unscheduled visit to a small Innu community in Labrador changed his life in 1999.

Stevens was playing in Goose Bay, Labrador as part of a Canadian peacekeepers tour when he was invited to the nearby 1,300-person community of Sheshatshiu, which had been plagued by poverty and a near epidemic of potentially fatal gas-sniffing by young people. He caught a group of these kids in the act, approached and asked if he could play them some songs on his harmonica. His performance brought a gleam to the cloudy eyes of some of these youngsters, and a dialogue was established.

“I think I learned more about music in that 45 minutes playing with those kids than I had in my whole previous music career,” Stevens tells Samaritanmag.

Part of that interaction was filmed, Stevens gained national media attention and a new path laid itself out before him. He put his successful music career on hold to collect donated musical instruments, deliver them to remote and impoverished northern Canadian communities, and set up week-long workshops while he was there to teach kids how to play — paying for everything on his own.

Stevens severely drained his bank account as he made eight more trips to Sheshatshiu over the next two years and he realized he could no longer continue as a one-man operation, so he initially enlisted musical friends and formed the entirely volunteer-run ArtsCan Circle charity in 2002 so he could put more instruments in kids’ hands to try and make a difference in their lives.

“These communities have had so many broken promises and government programs drawn up in a board room where they [government representatives] never even talked to the community and applied the program like a template, and when the money runs out they’re gone,” says Stevens.

The program has grown to include about a dozen geographically and economically isolated indigenous communities and hundreds of volunteers. They try to visit each location twice a year and these towns and reserves become part of the program forever.

“When you go into a community, you can’t have any plans,” says Stevens. “You land and you listen. You see what folks might need. We’re not teaching. The music and the instruments are just a beginning. It’s about getting these kids fired up and turned on.”

Recording equipment has also been supplied to enable young people to record and retell the stories of their elders in their first language. ArtsCan Circle delivers hope and heritage, two things that are often in short supply in many native communities these days. 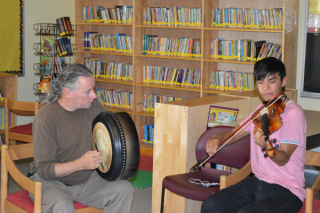 More than 11,000 harmonicas and thousands of guitars, violins and percussion instruments have been donated over the years, and art supplies are now often included in the deliveries. But reaching fly-in communities can cost $5,000 just for flights for four people, so ArtsCan Circle also collects monetary as well as music and art donations to enable volunteers to keep on making the trips. Stevens said there have been requests for music workshops across North America, but there isn’t sufficient funding to meet the demand.

ArtsCan Circle raises money through such grassroots means as bake sales, benefit shows, house concerts and private screenings of the 2011 documentary about Stevens and his work, A Walk in My Dream. TD Bank Group has provided a grant that Stevens hopes will become an ongoing source of funds, something which ArtsCan Circle has never had from the corporate community.

Aeroplan Canada has added ArtsCan Circle to its charity causes on its website and people can contribute Aeroplan miles to help defer transportation costs here.

“I don’t see us as trying to fix or save a community,” says Stevens of his efforts. “They have all the skills. We just want to lend a hand to help.”