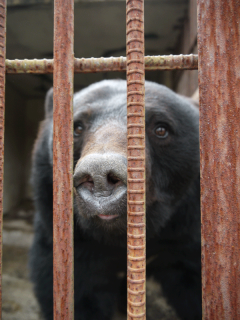 World Society for the Protection of Animals (WSPA) is ramping up its Bear Bile campaign, bringing awareness to the barbaric industry in East and South East Asia where thousands of bears are being held captive in small cages so that bile can be extracted from their gall bladder and sold for use in some Traditional Asian Medicine (TAM). It is also added to some wine, energy drinks, toothpaste and shampoo, according to the WSPA.

A Barefoot For Bears event in Toronto next week (Aug. 28) at Elixir Organic Spa asks media to come in for a complimentary pedicure and manicure but to donate what they normally would spend on a spa treatment to the WSPA and, more importantly, to spread the message via social media, coverage and even word-of-mouth.

On the other side, the WSPA will be introducing social media initiatives encouraging people to donate, upload photos of their paws (feet and hands) for the Barefoot For Bears cause, send virtual gifts to their Facebook friends or add a Twibbon (a microsite for the cause) to their Twitter profiles to show support, using #barefoot4bears and @WSPACanada.

Statistics provided to Samaritanmag states that up to 20,000 bears are currently being held in bear bile facilities across Asia, predominantly in Vietnam, where their bile is thought to help treat liver, heart disease and cancer, even cure a hangover.

Bears are the only mammals that produce large amounts of ursodeoxycholic acid (UDCA), which is the active ingredient in bear bile. More than 30 TAM groups have spoken out against bear bile and are using other plant-based or synthetic substitutes.

WSPA has been working with Asian governments to put a stop to the industry. In Vietnam, extracting, selling and advertising bear bile has been illegal since 2005. But a black market still exists. As one measure, WSPA’s bear proteins detection kit allows customs officials to stop illegal imports of bear bile and body parts.

According to the WSPA, the bile is extracted by one of three methods:

1) a tube leading into the gall bladder is created, allowing bile to be extracted. To stop the tube closing up, the abdominal wound is reopened up to three times a day.

2) ultrasound equipment is used to locate the gall bladder, before a syringe is inserted deep into the bear’s body to extract the bile.

3) bears are caged, left to reach a certain age and then killed. The bile is extracted once the bear is dead.

The WSPA has many pages on its site that goes into more detail about bear bile, what it’s used for, inside the bear farms and how the bile is extracted. Suffice to say it causes extreme pain, trauma and other medical conditions to the bears.