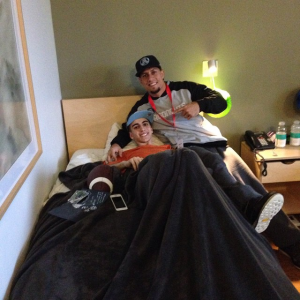 Toronto Argonauts Chad Owens has gone public with a crowdfunding campaign to help a young fan who is going through stage 4 metastatic neuroblastoma, a form of cancer that affects the nerves and bones. For the footballer, it's also about showing that he's part of the community. In a not-entirely-common gesture for an American-born football player in the CFL, earlier this year he moved his family to live full-time in Toronto. Helping out, he says, is part of being in that community.

"I'm a Hawaiian man, we've got nothing but aloha for a lot of people," Owens tells Samaritanmag. "And I feel as if me as an athlete, moving here to Toronto, making this my home... back home we call it our 'Kuleana,' our responsibility, and to me it's just my Kuleana to give back. Especially in a special way like this.”

When Marcus Baksh, a 13-year-old Clarington, Ontario boy with cancer, asked if Owens would visit him while he was in recovering from treatment at Ronald McDonald House, he received that visit, and more.

Owens, the Canadian Football League's Most Outstanding Player Award winner from 2012 and holder of the CFL record for the most all-purpose yards in a single season, decided he was going to see what else he could do for Marcus.

Neuroblastoma is the most common extracranial solid tumour in childhood; most cases are diagnosed in children under the age of two, according to America's National Cancer Institute, and rarely in teenagers.

"I first met Marcus a couple months back," Owens says. "I was asked 'Hey, could you come visit this boy Marcus? He's battling cancer.' I didn't know the whole story, I just knew that this boy wanted to meet me. Of all the people he could've requested, he wanted to meet me.

“So I was excited for the opportunity to just help him out any way I could at that point. I went to the Ronald McDonald House where he was recovering and I had a chance to meet him and his family. I've come to learn that he's an unbelievable hockey player and got to know a little bit about him. I just felt like I wanted to do something more for him.

"They talked about a fundraiser that they were going to be doing. They asked if I could donate a couple items, a jersey or something. So I said, ‘Yeah, no problem; I'll give what I can.’ And after thinking about it, I thought, 'Man, there's gotta be more I could do.'"

Marcus' bone cancer was discovered after he took a fall playing hockey earlier this year and doctors discovered he had tumours on his pelvis and spine, which have since spread to his bone marrow. His cancer has advanced to stage 4. His treatment has been taking place at Toronto SickKids hospital and his recovery at Ronald McDonald House,  a respite facility that "provides a home away from home for seriously ill children and their families to heal better together," according to the organization's site.

Marcus is the oldest of four children (Andre, Dylon and Bryanna), his father Anthony is an independent contractor for FedEx and mother Marisa is a stay-at-home parent. Fundraising efforts have been going towards accommodations for Marcus' family as well as other unforeseen costs.

That "more" was the #ChadForMarcus fundraising campaign on the Raise Hope charitable crowdfunding website. To date, after 16 days, they are half-way to their goal of $3000.

Contributors to the campaign, which lasts until May 21, get a variety of perks. For $10, you will receive a shout out from Owens on Facebook; for $20, you will be entered into a draw to win a signed 2 x 5 photo canvas photo canvas of Owens celebrating the Argos victory at the 100th Grey Cup or an autographed Argos helmet. He’s also offering the opportunity to have lunch, go to a movie or take part in a training session with him.

Some charity-minded Argos-connected people helped Owens set up the campaign.

"Natasha Borota from The It Factor, she does a lot of work with charities, she works with the Pinball Foundation (former Argos player Michael 'Pinball' Clemons' Foundation), I've been working with her for a couple years now and she had a contact at Raise Hope," says Owens.

"This is what they do, they create cross-funding campaigns, and they were able to put this together in one day. So it's just an incredible platform to use. And what I found out through the Raise Hope group is that I'm the first athlete to raise money for someone else. I guess it's used mainly to raise money for your own foundation."

"Besides the fact that he's 13 years old, I have a son that's turning 12 in a couple days," says Owens. "I relate to that. So I look at Marcus and I think of my son. And I think, 'Man, if that was my son I'd want as much support as I can get.' And that's really what hit home for me, when I put my family in that situation, my boy in that situation. Yeah man, that's why it's so special to me."

And that’s why it’s his Kuleana.

"I can run football camps, I can do all this stuff, I can get involved with kids, but the goal of all this everything time, the goal in all this is to affect one person,” says Owens. “One kid in that crowd that you coach that whole day. If you've affected one kid, you've done your job. So, for me, I have that chance to focus on one kid, on one person and I can give him my all and that's all I'm trying to do."

Winners of the opportunity to spend a training session with Owens will experience a different kind of focus.

"I'm gonna make them into a football player overnight," he says, slyly, before reassuring, "it's gonna be fun. It's gonna be a fun session and we might get into some lifting, a light run after, maybe some speed and agility stuff."

For the night out at the movies, Owens says the film they'll watch will be chosen via mutual consensus.

As for Marcus, his reward for getting better will be to take on Owens — on the ice.

"There's so many situations like this, but what makes this special is he requested me," says Owens. "So I'm gonna give him as much as I can because at the end of this I don't want to regret anything at all going, 'I could have done more, I should have done more.' That's how I am. As a player you never want to end every season, every game going 'Man, I didn't put as much preparation, as much effort in there as I could've.' So I'm just learning as much as I can for him and I told him when we get through this we're gonna get on the ice and we're gonna play a little hockey.

"I've played rollerblade hockey and this winter I actually got on the lake, on the ice with (retired Argos player) Jeff Johnson and his family.