Why should a great idea like a lending library only be used for resources such as books and movies? Why not a lending library for power tools, kitchen appliances, sports equipment and other costly consumer goods that many either can’t afford or use often enough to justify ownership?

That’s the basic idea behind the Toronto Tool Library which offers a cache of some 1,000-plus tools — plus workshop space and in some instances, training and supervision — to dues-paying members of the public via two spaces located at either end of the city.

Operated by the non-profit Institute for a Resource-Based Economy (IRBE), the Toronto Tool Library puts into action the IRBE’s mission to advance and nurture a resource-based economy promoting “access over excess, usership over ownership [and] experiences instead of possessions.”

According to the IRBE site, a resource-based economy “describes a system in which all goods and services are available without the use of money, credits, barter or any other system of debt or servitude. All resources become the common heritage of all of the inhabitants, not just a select few.”

“Plus there is an obvious environmental message associated with this. These tools have to be manufactured and shipped around the world to end up in our hardware stores,” IRBE executive director Ryan Dyment tells Samaritanmag, noting that the tool lending library concept can be traced to California in the 1970s.

He continues: “So we’re saving people money and we’re helping the environment by lowering consumer consumption of tools. When people can change their mindset about physical resources like that, then maybe they can relate that to other parts of their lives — start sharing cars more, or sharing their homes more. There are ways for people to get involved in the economy that really shifts the larger picture.”

The Toronto Tool Library works like this: individuals 18-and-over pay a $50 annual maintenance fee (a sliding scale is also available for those who need it).  They are then eligible to borrow tools for five days from one of the two libraries — or access outsize stationary tools like a laser-cutter on premise — for crafts, home improvements, furniture making or any other personal project. Use of tools for “any trade, business, commercial, or rental purposes” is forbidden. 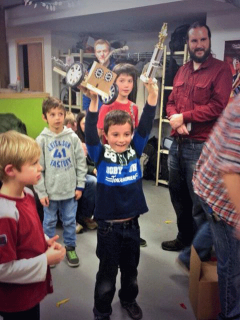 As with a traditional lending library, late fees apply for overdue items but renewals and holds are available. Various workshops like Power Tools 101 are offered and the physical spaces — at the Parkdale Activity-Recreation Centre (PARC) at 1499 Queen Street West since March 2013 and at 1803 Danforth Avenue since last October — are also used to host children’s birthday parties where kids can build stuff.

According to Dyment, 95 percent of tools in the library have been donated under circumstances including death, divorce and altruism. “And many more besides,” he confirms.

“We had one guy who renovated his home, had a wide range of tools that were just sitting in his garage.  We always tell donors that they can take the tools back for an extended period if they need to. Another donor was a handyman who was not physically able to use the tools anymore. He had them sitting in his storage locker in his apartment for years.

“So we took those tools and gave him a founding membership. On the east side, a guy’s father passed away and he had all these tools for a woodshop: tablesaw, planer, jointer… big huge tools used by a cabinet-maker. So he dropped those tools off and we gave him a Makerspace membership,” which allows 24/7 card key access to the tools, the woodshop and so on.

Dyment confirms that Toronto Tool Library membership draws from every walk of life: homeowners, condo-dwelling hobbyists, people on limited income and those craving the communal aspect of working alongside others.

“The majority of our members are between 20 and 35, maybe first-time home owners without a lot of tools. The older people who are part of the space are usually donors who like using the shop. We have a few donors who gave us tools they had their whole lives.

“About 30 percent of our 617 members are women, and we have female-oriented workshops such as how to use power tools, tablesaws, mitre saws… things women maybe haven’t had much experience using. With workshops we kind of just throw it out there and see what sticks.”

Word of mouth has proven to be a powerful marketing tool. “The uniqueness of the project really helps because most people don’t associate tools with libraries,” Dyment says. “So we’ve had some mainstream media which helped get the word out. Plus when people save $500 just in a weekend by coming to us, they are excited to talk about that.”

Membership is also $50/year (or $75 for dual kitchen/tool library access) and appliances may be borrowed for up to five days. Both libraries run on the steam of volunteers and rely on members to be gentle with the borrowed items for the benefit of all.

Perhaps surprisingly, corporate donors such as Home Depot and Canadian Tire — vendors who sell precisely the items the Tool and Kitchen Libraries are seeking to minimize at the retail level — have so far been supportive.

“Home Depot gave us a small grant of a few thousand dollars, Canadian Tire gave us some tools. Obviously we are challenging the way these companies make a living,” Dyment says, “but they do understand it’s a community project. And you still need other things that they sell like nails, screws, wood. So this is a way of aligning our interests.”

The IRBE is currently in negotiations with the City of Toronto to bring a sport equipment-sharing program to City parks.

“Our volunteers would help build sheds that would then be set up at a park and be filled with sports equipment like soccer balls, footballs and stuff like that. When people are in the park they could access that equipment and put it back in the shed when they’re done.

“The City of Toronto seems happy, so we are just working out the specifics of which park will get the first shed. If that works, then we can roll it out in a lot more parks. To my knowledge this will be the first time this has been done in public parks. Like tools, lots of people have unused footballs sitting around in the garage.

“The economy is based on consumption and infinite growth and that can’t be done a planet of finite resources,” Dyment says. “So the future has to involve a lot more sharing, better designed products that last a long time. Legislation could play a role in this but people’s demand is powerful, and if they are accessing tools from us and not demanding cheap tools from the marketplace then hopefully those tools will be manufactured better in the first place.”