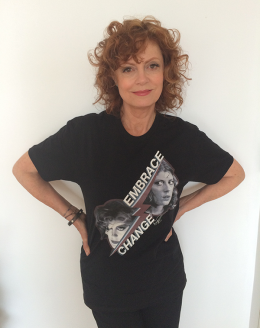 Deciding which Samaritanmag-wheelhouse topics to discuss with actress Susan Sarandon was not easy. The Oscar winner, known for roles in such films as The Rocky Horror Picture Show, Thelma & Louise, The Witches of Eastwick, Bull Durham, and Dead Man Walking, is almost as well-known these days for her activism, lending her name, face and voice to a variety of charitable organizations, social justice issues and political campaigns.

The 68-year-old New Yorker vocally supported Ralph Nader in the 2000 American presidential race, opposed the 2003 American invasion of Iraq (alongside her now former partner and fellow actor Tim Robbins), and has been honoured for her work as a UNICEF goodwill ambassador. A look at recent activity on her Facebook page and Twitter feeds shows that she Skyped with Italian astronaut Samantha Cristoforetti in a bid to promote greater enrolment by girls in maths and sciences and voiced her support of Democratic presidential candidate Bernie Sanders.

Sarandon also headed up a campaign to raise completion funds for the documentary Deep Run which she executive produced. Deep Run follows Cole Ray Davis, a young transgender man living in a rural community in North Carolina, as he struggles to be accepted in a place where ignorance and poverty rule. The campaign saw Sarandon and her team selling T-shirts emblazoned with the words “Embrace Change” and images of the actress as her Rocky Horror Picture Show character Janet Weiss.

She also recently visited Nepal on behalf of the non-profit Live to Love in a bid to encourage tourism there after the summer monsoon season ends. While the April earthquake and May aftershock devastated parts of the country and over 8,600 people did die, many of Nepal’s historical sites, Sarandon notes, remain untouched. Sarandon also tells Samaritanmag how to best help Nepal, and it does not involve the Red Cross.

You recently designed a T-shirt which uses images of you from The Rocky Horror Picture Show and the motto “Embrace Change” to raise money for the documentary Deep Run. Talk about your decision to use Rocky Horror imagery on the T-shirt.

“This documentary is about a transgender person, and I think the thinking was that The Rocky Horror Show audience, the demographic of ‘don’t dream it, be it,’ might be particularly interested in supporting that film. And we were doing something quickly so they just grabbed the change in Janet to somehow represent the path to something new in a brave way.

“It seemed like it was a good idea. I don’t know if we’ll get sued. I hope not. I mean with all the money they’ve made off that money they’d better not sue because nobody else made money!”

Regarding Deep Run, how and why did you get involved in that production? Was it through producer Chris Talbott?

“Yeah, yeah. Chris and I have known each other for a long time. He worked years ago as an assistant to Tim [Robbins, Sarandon’s ex-partner]. He’s worked for a number of non-profits, including [activist] Somali Mam and her foundation who I became very close to. Hope North is another one which deals with the victims in Uganda, the child soldiers and orphans there. And then on the side I’ve seen some of his documentaries. And when he came to me with this one I just wanted to help him.” 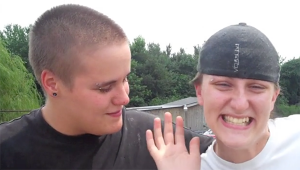 The subject of Deep Run, Cole Ray Davis, lives in North Carolina, far from Hollywood, and he does not have Caitlyn Jenner’s economic resources. In what ways do you hope Deep Run inspires or impacts transgender youth in more conservative and less affluent parts of American or the world at large?

“Well, just that. I think the conversation about transitioning and transgender is much wider than obviously someone who is on the cover of Vanity Fair, although I’m very, very grateful for Caitlyn for what she’s done, you know, and that particular take on that particular life.

“And people have got so upset about what Caitlyn has expressed about what she loves about transitioning to a woman, and authenticity and everything. But I don’t think there’s anything wrong about her representing that particular part of who she is, in expressing who she is, being representative of a certain demographic any more than anyone else who gives an interview about their life that are rich and famous should be held accountable.

“And so one of the reasons I think the film is important is to inject into the dialogue what has now been started with this high-profile [person], or [transgender Orange Is the New Black star] Laverne Cox; any of the high-profile people we have seen who are glamorous and working in the show-biz industry and managed to have people interested in asking questions and being educated about the phenomenon of what’s going on now.

“I did a movie [called Three Generations] where Elle Fanning is transitioning, and that’s another perspective with kids; you know, with all the questions families have to deal with mourning the loss of this person as they knew them, and adjusting even when they’re accepting.

“And Cole is also poor and doesn’t have a functioning family. So add that to the stress of what his life is. So the fact that the filmmakers were able to follow him for so many years and see so many ramifications, it’s important for people to understand that there is no such thing as just one representative of any community. There’s no one guy who represents all white straight men, or black or women. That’s really ridiculous to think that we can hold up one example and try to make that person the definition of a wide group of people.

“I don’t understand why people are so angry about the fact that Bruce Jenner was able to generate 17 million people having a dignified conversation about feelings and loss and with Diane Sawyer who did a great job in that interview. No one is claiming that that’s the definition of womanhood or a transgender person or anything. This is one particular story, and it grabbed the attention of a nation, and mine. And it’s a conversation that needs to be had over and over and over again. And it’s a good beginning, with one example of a certain type of person.” 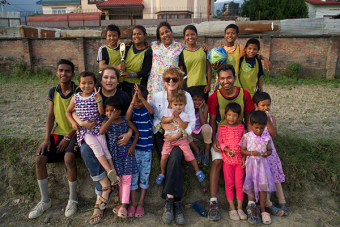 You recently went to Nepal on behalf of the non-profit Live to Love. What misconceptions about Nepal do you think media coverage of the earthquakes fostered? Because not everything was destroyed.

“That is the biggest misconception. I went out of my way to be photographed with a lot of beautiful temples that are still standing. I think hen the monsoons subside in the fall it would be lovely to go to Nepal, and as much as they need money, they need tourism. And I went expecting to see nothing standing, and that’s not true.

“And the spirit of the people, as to be predicted, is good, and I think they’re going to rebuild. And I have a friend [children’s advocate Pushpa Basnet] whose orphanage we were building, and that had to be taken down brick by brick, and we’re making it stronger and rebuilding. And so that’s what everybody is doing, is rebuilding their lives and trying to bounce back.

“But the most important thing to know is that Nepal is still a beautiful country and there’s a lot to do there, and in the fall everything should be ready to receive tourists, and if you’re curious you should go.”

How effective do you feel has been the international response to the situation in Nepal, and how should people best help?

“I would say that you should find a group that was working there before the quake. Live to Love is one.

“The thing is, honestly, I’m going to say this in print, but I think it’s most effective not to go to a government fund and to find someone who’s actually bringing things over or making the trip themselves. Because just like in Haiti, just like in 9/11, things get sent and they don’t show up.

“And so I would say to go with a group that’s been in there and functioning. I’m not a big fan of the Red Cross, for instance. I don’t think that they… They weren’t going up into the hills. Like Live for Love, I went up with the nuns into the hills, which [the Red Cross] would consider too dangerous.

“So I think sometimes the groups that are in there understand better how to get things done, and they don’t have the overhead of bringing in people and staying in hotels, whatever. That’s what I would say. And visit if you have the means. Visit in the fall.”