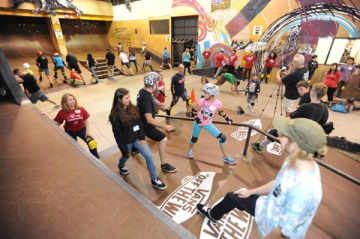 Skateboarding and skateboarders attract all sorts of labels, many pejorative: subversive, dangerous, antisocial, annoying, daredevil-ish, thrilling, and just for kids. Jay Mandarino is determined to add a few more attributes to the list, all of them positive.

Mandarino is the founder and president of C.J. Skateboard Park and School, a not-for-profit indoor skateboard facility dedicated to engaging and empowering children in the community, including at-risk youth and those with special needs.

At 25,000 square feet, the seven-year-old Etobicoke, Ont. facility is the fourth largest not-for-profit skateboard park/school on the planet. Every week, its paid staff and volunteers serve hundreds of kids through lessons, camps, parties and special events. “We serve every kind of group you can imagine,” Mandarino confirms to Samaritanmag.

“Sick kids, special needs kids, even a transgendered group. We have the richest kids and the poorest kids. And we have no issues. It’s all about just having fun. We’ve had a huge impact. In our autistic program we’ve had kids who were never supposed to speak end up speaking. We are breaking the barriers. We’ve had amazing reference letters from people.”

Many programs at C.J. Skateboard Park and School are free. Costs of others such as PA Day camps (where busy working parents can park the kids all day with meals for $55), professional lessons and summer camps help subsidize free programs.

Through skateboarding — a sport that’s largely non-competitive, suitable for all age and ability levels and relatively cheap to participate in, equipment-wise — C.J. Skateboard Park and School aims to imbue its athletes with confidence, self-esteem, camaraderie and, in some cases, a rare but precious sense of normalcy, of simply being just a kid rather than a kid coping with cancer, ADHD, Autism or another disorder or disability.

Mandarino, 53, knows all about how skateboarding can provide salvation.

“When I was eight or nine years old I attempted suicide,” he says. “I couldn’t read or write; I had no self-esteem. I was told I was stupid; I’d get in fights at school, be chastised. But my parents never gave up. They kept testing and testing until they discovered I had dyslexia and ADHD. They sold their house to send me to a private school in the States where, among other things, I learned to skateboard. I mean, I couldn’t even ride a bike. But skateboarding empowered me. It wasn’t a team sport and it was non-competitive and I was able to excel from that.

“I returned to Canada, attended university and became very successful. Today, I have 18 companies with sales over $25 million. And it’s all because of skateboarding. In 1976 when I was 15, I jumped over a Ferrari on a skateboard and made it into the (Toronto) papers. That was amazing and I felt so accomplished. That totally impacted me going forward. I never wanted a kid to go through what I went through.”

Multiple YouTube videos of kids skateboarding at C.J. Skateboard Park and School — most recently drawn from a ‘Kids Being Kids’ event with Ontario Parents Advocating for Children with Cancer (OPACC), which happened earlier this month — illustrate Mandarino’s point. Parents marvel at how their kids, many ill and withdrawn, seem transformed by the experience while the kids themselves are breathless with their enthusiasm.

STORY CONTINUES AFTER VIDEO ABOUT THE PROGRAM FOR KIDS WITH CANCER:

Mandarino acknowledges that the benefits of skateboarding on kids, though palpable, haven’t been rigorously tested by a medical board. “I wish they would,” he says. However, a testimonial written by Oakville-based child and adolescent psychiatrist Dr. Kenneth Handelman unequivocally champions the sport as a kind of ad hoc physical and emotional therapy.

“Their desire to do a 'cool' activity motivates [my patients] to try hard, and propel forward,” Dr. Handelman writes in a letter from last June. “The park has provided an opportunity for kids with ADHD, Autism Spectrum Disorders, and Learning Disabilities to learn a new skill, and in so doing, improve their self-esteem and functioning skills.

“The kids who attend CJ Skatepark think they are going to learn to skateboard. I know that when they attend, they are actually improving their mental health, developing listening skills and building their self-esteem.”

Mandarino says most people find out about C.J. Skateboard Park and School through word of mouth, plus his tireless cheerleading at events he attends as a businessman and auctioneer across North America.

The park also stages promotional demonstrations, such as one it hosted last March Break at the Ontario Science Centre where, according to Mandarino, “we did three shows a day over 10 days and over 100,000 people passed through. We’ll do fairs and Terry Fox runs so the message is starting to spread but it is grassroots.” 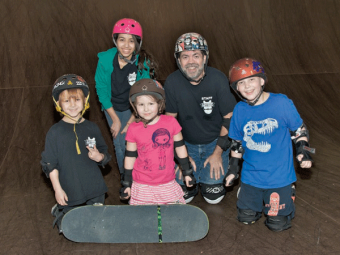 “But it’s not just money,” Mandarino says. “We have programs where people can help by pledging time. The great thing is you can see the difference you’re making. When we do our cancer days, we have 50 or 60 volunteers come down and they walk out of there having had just as much fun as the kids. Plus, pretty much everything in the park has been donated.

“You’ll see movie props left over from shoots that have happened there which adds character. A gentleman is going to be donating a rock climbing wall. We have a Sony PlayStation room for video games, so there is something for everyone. Plus one parent is a lawyer and he has offered to do the paperwork we need to become a foundation pro bono. Now we need air conditioning.”

And it’s not just about kids battling terrible illnesses and profound learning disabilities. Everyone can benefit from skateboarding, Mandarino insists.

“I am on the board of the Learning Disabilities Association of Ontario and I can tell you kids are under so much pressure these days. They have two sets of parents, everyone’s working harder than ever before and kids are struggling with stress. So to be able to do something where you’re not competing against someone else, just doing something because you like it, is so important.

“It’s very cool to watch these kids. And with skateboarding anybody can participate.  These kids are going to go on to be great ambassadors [for the park], and they are going to be amazing. To know that I made a difference that affected other people… well. There is nothing better than that.”