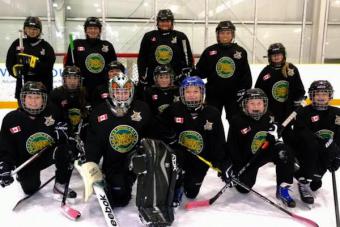 Say the name "Monster Truck" in rock circles and you're likely to think of Hamilton, Ontario's furry 'n' fiery four-piece responsible for such songs as "Don't Tell Me How To Live" and "The Enforcer."

Around the ice hockey rinks of Stoney Creek, however, "Monster Truck" means something entirely different. That's where a team of 11- and 12-year-old girls from the Stoney Creek Sabres house league hockey team proudly bear the Monster Truck crest on the front of their uniforms. Monster Truck the team is sponsored by Monster Truck the band and the unlikely pair have turned out to be a wonderful match.

How did the whole idea come about to sponsor a gal's hockey team?
At first I wanted to sponsor my own beer league team. But then I thought we could be sponsoring something way better, we could sponsor a youth team.

So we just put out the call and we had 10 or 12 really serious applications with stories and videos and whatnot. We knew going into it that we were leaning towards a girls team because we were aware that sometimes they have to take a back seat to the male teams. Whether it's at the upper level or the lower level we wanted to sponsor a team that may have had a hard time getting funding. When we found the SC Sabres in Stoney Creek — they're in my hometown; they're kind of a house league team that wants to get involved in tournaments and they're just excited about the prospect of being sponsored by a rock 'n' roll band — it became an easy decision to make

And as soon as I talked to (organizers) AJ [Bullivant] and his wife Michelle, that was the clincher. They told me that my suspicions were true, that they're lower on the priority list for ice time and all that stuff and after that the deal was done in a day or two.

Why is girls hockey at a disadvantage when it comes to opportunities like this?
I don't know the specific details, but it seemed to me that a lot of the male teams through sponsorships and previous agreements they have subsidies on ice time and organization benefits that haven't trickled down to female hockey yet. I think that's just due to the fact that all that stuff takes time to work out and because girls hockey has only really had that big surge in the last 10 years. But I think that's something that's going to come because people aren't fucking cavemen any more and nobody's going to stand for inequality in sports. So this just equalized things a bit.

Have you had a chance to see a game yet or will that be your first opportunity?
We haven't met the team yet because we've been coming out with the new album and the new single and traveling and everything. There's a Hockey Day in Hamilton coming up on December 16 and we're going to go and hang out. We get the updates, though. They were undefeated the last time we spoke to them. Getting photos of them with the jerseys and the general feeling around the team it's kind of a reciprocal PR campaign where we're pushing their team and it's obviously getting more attention than I ever expected.

That's another reason why we did it. We really slacked on the charitable end of the band for the first four years of our existence because we've been so busy. So the second we had some downtime we just wanted to get involved. But there are lots of bands doing lots of amazing stuff in Canada and I feel this is a very small contribution and we hope to be doing something much larger in the future.

What did it feel like the first time you saw photos of the team with your crest on the jerseys?
It was amazing. It was a wonderful moment because I remember getting my first jerseys when I played baseball and just having some crappy tire company or something on there, but knowing there are people out there trying to help you do what you do and help you get to the next level, that just felt great.

Just so people who might be interested in doing something similar know, how much did your sponsorship cost?
It was the cost of the jerseys and a $3,000 contribution to whatever they saw fit, which could be things like tournament entries. They're only a small league of three teams in Stoney Creek so I believe the Bullivants, who are kind of organizers, the money ended up getting separated over the three teams, so we kind of ended up sponsoring the whole league in a way. They basically said, "All the teams need help and we don't want to dump it all on the one team and have the other teams take a back seat" and that's cool. 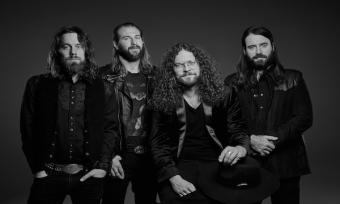 One of the things about house league teams is that often they're made of players from families who simply can't afford the absurd sums required to play elite hockey. Was that a factor in your decision?
That's why we picked them. We had a bunch of teams that were like, "We're a boys team and we're a travel team and we win all the time..." Well that sounds sexy, but the amount of money we were able to contribute is only the cost for one player at that level, so we just wanted it to mean more and that was part of the whole plan.

Do you consider this whole experience a worthwhile investment?
Honestly, I stand by the fact there's been too much attention. We don't have examples like all the other bands that have done shows and donated all the proceeds to a charity or whatever, so I feel that we've gotten more than we should have and I feel that it's really just going to encourage us to go hard next year where we're maybe going to look at a couple different teams. Maybe coming up with a program or something that's a little more centered around kids that wouldn't get to play otherwise. I'd rather look at kids that are at a complete disadvantage and want to get started in hockey where we'll be the difference maker between them not having something to do on Saturday morning and them getting on the ice.

Since sponsoring the team have other area acts like, say, Finger Eleven or Lee Harvey Osmond, reached out to you and said they're gonna sponsor teams now to compete against your gals?
Nothing so far, but once I saw what we were going to do and saw that it was a three team league I was going to put it out to the Arkells. I think that would be super-fun and it would be Team Arkells vs. Team Monster Truck on the ice at the same time. All the attention we've been getting from this may spurt on more people to do the same thing, which I couldn't be happier about if that ended up being the case. If we began a thing to get behind youth sports that would be A-OK with us.