Q&A: Walk for Freedom this Weekend in 250 Cities for 27 Million Enslaved People

Human trafficking is a form of modern-day slavery. Around the world, 27 million people are in bondage, sold into servitude for sexual slavery and forced labour. Even more horrifying is that the crime can be invisible. Physical chains are not needed to keep a person in bondage; for that, fear can be just as strong as steel.

A21 is a global non-profit organization founded in 2007 with the goal of ending end human trafficking. It began operations a year later with a shelter for survivors of human trafficking in Greece; today it has 11 field offices around the world, as well as shelters, transition homes, and administrative bases in 10 countries.

The Walk for Freedom is A21's fundraising and awareness campaign, now in its third year. On Oct. 15, there will be over 250 walks around the world. Participants walk in single file with black tape over their mouths to symbolize unity with the voiceless victims of this crime.  Over 12,000 people participated in walks in 2015.

Samaritanmag spoke with Jennifer Timberlake, volunteer organizer with the Walk for Freedom Vancouver, about the cause, the realities of the crime, and how the problem manifests locally, nationally and globally.

How did you get involved with the Walk For Freedom?

As soon as I heard about it, I knew it was something I wanted to be a part of.  I was a volunteer for an organization similar to A21 that fought human trafficking, while I was in grad school. It's something that's been a passion of mine for a long time.

There are countless causes one can support, but this one spoke to you. What is it about this crime that made you want to take action?

For me, [human trafficking is] something that transcends race, religion, and creed. When I first found out that this even happened to people -— being from Canada, we don't really think about this stuff as much, and it's not as prevalent and obvious —  it was a campaign called Free to Play. I was an athlete, and thinking about the fact that little kids all over the world didn't have the same freedom I did as a kid.. It broke me in a different way than I had ever experienced before, just thinking about people that are not free to go to school, not free to study music, not free to pursue their passion, because someone actually stripped away that freedom and enslaved that individual. It's something I can't wrap my head around, something just beyond wrong. I thought, "I have to do something about this."

When we think of human trafficking, it's often the lurid images of eastern European women being sold into prostitution, but it's a much bigger problem than that, isn't it?

You're not wrong when you talk about women from Russia or eastern Europe or China, but it does also happen every single day right here in Canada. I know a victim of human trafficking who's Canadian, who was sold and trafficked from the time she was four years old.  She was in the industry being trafficked until she was 20 years old and got out. She now lives in a safe house, and I council her. I'm directly affected by somebody that's Canadian. People think that it doesn't happen here and it does. In Vancouver, we have the lower east side, Main and Hastings, where everyone sees the "worst" part of Vancouver. A lot of the people out there are trafficked, sold into sexual slavery or controlled by pimps or by organizations. People don't realize there are houses where women are forced to "serve clients." They don't have a choice and it happens right here, not just on the other side of the world. 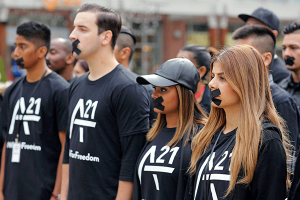 Is it a crime that only involves women and prostitution?

It affects men, women and children. You definitely have more women or young girls —the average age of a trafficked individual is 14 years old — on the sexual slavery side of things. But there's forced labour, too, where you have men and women, and sexual slavery can effect men and boys too.

Does it also affect a disproportionate number of racialized peoples, or indigenous peoples in Canada?

Yes.  I was reading that indigenous people make up 4 percent of our total population in Canada, but they make up 50 percent of the victims that are trafficked. So it's certainly a huge issue for the indigenous population.

You mention it not being as obvious in Canada. Does that mean that people aren't necessarily in chains, or locked away, so they might appear free?

Absolutely. Even when you see a prostitute on the street, if we're honest, we know people may judge her, but the reality is she may be forced into being out there by her trafficker. It's not just physical enslavement; it's an emotional and mental enslavement as well. The trafficker doesn't always have to be there in order to traffic that victim.

Some people would ask why the person doesn't just leave, but as with domestic abuse, it's not so easy.

No, not at all. The young woman that I know personally, she literally had to come to the other side of the country to escape her traffickers.  I remind her often, too, that 99 percent of those enslaved are never rescued.  1 percent of people that are trafficked actually get out of being trafficked. That's an astonishing number when you consider there's 27 million people enslaved around the world today. That's almost the population of our country, and 99 percent of those people are never freed. It shows you how much more we have to do, how there really is a need for people to step up. Even though it's a win when somebody is convicted, there's very few actual convictions, sometimes because those that are trafficked are fearful and they don't come forward, or they can't escape. In Canada, I was reading a statistic that actually said that 93 percent of trafficked victims in Canada are actually Canadian.

That's far higher than most people would think. Why is this crime so prevalent in Canada, or anywhere for that matter?

I was speaking to the founders of A21 a couple of months ago, Christine and Nick Caine, and he was telling me a story about one of the traffickers. Part of their thing is prosecution — they help victims of trafficking go after their traffickers — and one of the men that was prosecuted basically said if you sell drugs, you can sell it once. You can sell a human over and over.  It's horrible, but that is the mentality of these people. It's sick, but that's the truth. You can sell a human being 20, 30 times a day, and that's what happens.

It's chilling to hear humans discussed so frankly as commodities.

Absolutely. It can be very depressing when you think about it, and that number — 27 million people around the world — but we can also celebrate the successes. One of the greatest things about A21 is their goal is to help one person at a time. It's to abolish slavery in the 21st century, but they believe that you do that by bringing in one person at a time. The Walk for Freedom helps us do that; it helps us stand with those that are trafficked and gives a voice to the voiceless. It raises awareness and brings attention to this epidemic.

In terms of fundraising, where do the monies go? Do they stay to assist local victims or do they go to the global cause?

Great question. Right now, if you donate to A21, it goes to the global cause. They don't currently have an office in Vancouver. Part of the reason we've taken this on is that we see a need for an office in Vancouver. That is our ultimate goal. They have 11 offices around the world, and we believe one is needed in Vancouver. We've made a goal for ourselves of raising $21,000 [CAD]. I believe A21 has a goal to raise $1 million [USD] through the walks, which is something like $4000 per walk. We want to go to $21,000 and really show that there is a need here and support here.

How can people learn more about, and get involved with, the Walk for Freedom Vancouver? Can they stay involved with the organization in other ways afterward?

Our website is www.a21.org/vancouver and they can sign up for the walk right at that link. We definitely want people to be involved after the walk as well. You can touch base within Vancouver through our Facebook page and we also have an Instagram page. They can also come out and talk to us at the walk. You can sign up with us — we call ourselves the A-Team — get more involved and get information.