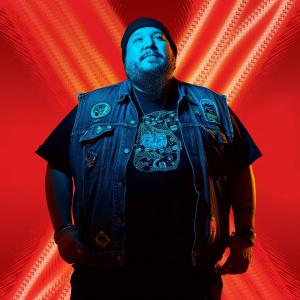 When Ottawa electronic act A Tribe Called Red (ATCR) opened the 2017 Juno Awards broadcast, it wasn't just an important moment of mainstream recognition for the band, it was also a sign, a spark that showed the indigenous musical renaissance happening in Canada was real and here to stay.

Perhaps just as symbolically important as Tribe's performance, though, was the fact that Buffy Sainte-Marie was the one who introduced the band that night. A 10-time Juno nominee and seven-time winner, Sainte-Marie is about as good a moral compass as you can find in this world.

According to Bear Witness, one-half of A Tribe Called Red along with 2oolman, Sainte-Marie took a moment share a valuable observation with him at the side of the stage.

"We were waiting to go on stage to do our performance," he tells Samaritanmag, "and when she walked back down from introducing us I was quietly thanking her and saying it means so much that you're here to introduce us and she squeezed my hand and looked up at me and said, 'Bear, it used to just be me here.'"

Sainte-Marie's words didn't just reflect Canada's expanding interest in indigenous music makers, it was also a sign that this community of music makers was growing and thriving.

In many ways, this week's X Avant New Music Festival in Toronto is A Tribe Called Red doing its part to make sure there's more than just them here.

Put on annually by The Music Gallery, Toronto's "centre for promoting and presenting innovation and experimentation in all forms of music," the 13th edition of X Avant has been curated by Bear Witness and features names like Los Poetas, Ziibiwan and El Dusty appearing over its four days.

The fest's theme this year is The Halluci Nation, a play on ATCR's critically-acclaimed 2016 album We Are the Halluci Nation. On that album, ACTR took their unique powwow-step electronica and paired it with a worldwide cast of musical guests to create a uniquely expansive musical vision.

For X Avant, Bear Witness is bringing Halluci Nation album contributors like Lido Pimienta and Narcy to the festival and wants to explore what the seeds of this musical journey have sown.

Samaritanmag spoke to Bear Witness about community, finding our way back to the natural world and late poet John Trudell's guiding words.

You curated the acts for this year's edition. What criteria did you use in selecting the acts?

I took the opportunity to further the conversation around The Halluci Nation, the concept behind A Tribe Called Red's last album. So the artists I put in either fell into the category of people who contributed to my growth as an artist, to artists who are very much contemporaries of A Tribe Called Red and artists that I feel are, in their own way, out there in the world doing the same work.

One event at the fest will feature a discussion on the concept of The Halluci Nation and will feature Lido and a number of other people who were on the record. What are you hoping people get out of that discussion?

Well, the concepts around The Halluci Nation were kept purposefully vague and that was to allow people to connect with the concept on their own terms. So it's an opportunity to get some feedback from artists who were involved in the album and what it means to them. And just have a chance to talk about the experiences people had interacting with our idea, and maybe a little bit about where things are headed now that we've created this thing.

The concept of "community" can sometimes be really nebulous. Not quite a buzzword, but something hard to define. What does that word mean to you?

I guess for here, we're talking about creating a community and dreaming of what a community could be. It's really almost an experiment in dreaming about the future. I'm a really big science fiction guy and watching how so many things in science fiction over my lifetime have become reality, how else can we use that fantasy, that dreaming part of our brain, to bring other things into the world? That's kind of the experiment, what we're trying to bring about by bringing people together.

What do you hope comes out of this, in an on-the-ground, tangible way?

I keep on going back to this idea of experimentation and it's really that. It's an idea I've had for a while, of, again, if you're going into the buzzwords — "allies." And I really mean allies like the true meaning of the word. When we came together as A Tribe Called Red, there was a realization that we could accomplish more as a group than we could as individual artists. When we came up with the concept of the album, before we had the name The Halluci Nation, we knew it was about us needing more help, more allies to help join our vision. So again it's an extension of that. "Let's pull in more people; let's pull in people who do this work in their own right. Pull in people who have been doing this work for years before us." So it's really a call, I guess, an invitation for all these people to participate, to do this work together on any level.

There's a quote being used in the X Avant promotion: "We need to learn from things almost forgotten. We need to learn what it is to be human again and how to treat others as human." I wanted to explore that a bit. First off, what do you feel we need to relearn?

At one point in time, all people on the Earth were connected to the Earth. We all had spirituality and ceremonies and things that honoured and reminded us that we were part of nature, that we were custodians of this planet and that we were connected to the earth, the plants, the animals, the stars, the sky, we were part of all these things. Over time, many of the groups around the world who followed these Earth-connected realities and practices have been wiped out. So most of the people who still have that way of living, and who remember that way of living, are indigenous people. And the indigenous people of the world, over the past 500 years, are people who have almost been wiped out. So when I talk about things almost forgotten, those are the things. The concept of remembering what it is to be human and treating others as human beings, that comes from [the late Native American author/poet/musician/actor/activist] John Trudell as well. So when I talk about things that are at the heart of The Halluci Nation I always go back to that particular quote.

On a practical, on-the-ground level, how should we go about doing this?

That's a much larger question I don't necessarily have the answers for. Going back to the idea of experimentation, we're bringing people together to try to figure out those things. That is the struggle that we're going to face now: how do we make that part of the world again? There's a lot of people who are trying to figure out that question and a lot of people who are doing the work to make that a reality. But I guess a big part of getting there, the work that needed to be done first, is happening, for indigenous people to heal. We had to be able to heal first. We had to be able to gain strength for our own selves within our own communities so that we could share that knowledge that we've been able to hold onto tooth and nail for hundreds of years of genocide. That's happening.

We're now the first generation to grow up without residential schools. That healing process has begun. It's been really interesting watching these things happening. In the last two years, watching the Polaris Prize go to Lido Pimienta and Jeremy Dutcher, and what that represents as far as where the indigenous community is and where the rest of Canada is in interacting with the indigenous community, you're starting to see the steps there where things are starting to change, and you can get to the point where we can share and learn from one another.

Lastly, what are you hoping to achieve with this weekend?

It's the same thing that we're always trying to achieve, which is a better understanding of what we're trying to do as artists and indigenous artists while also trying to strengthen those connections between artists that we know, or are getting to know. We're building on these concepts. We gave this thing out to the world and to our fans and other musicians and I'm really interested to see what bounces back now.