When the Strumbellas announced they were cancelling their already postponed tour dates in early 2020 supporting their Rattlesnake album, the “Spirits” hitmakers said in a press statement to fans that it was “a difficult time for all of us, and your continued love and support has given us even more motivation to focus fully on getting back to good health and back out on the road.” It was signed by all six members of the Juno Award-winning folk-rock group, who thanked everyone for “standing by us.”

As it turns out, compounded by the pandemic which struck in March, the band would not make music together again until November, when they cut a very personal song Ward wrote called “Greatest Enemy,” produced by Dave Schiffman who did their 2016 breakthrough, Hope.

When the single came out in February, the Strumbellas gave a clearer reason for the hiatus: “Ward realized that the depression he had been dealing with for the past 15 years was no longer something he could deal with on his own. Ward was hospitalized and placed under doctor supervision.”

Co-written with songwriter Stevie Aiello (Thirty Seconds to Mars, Lana Del Rey), in "Greatest Enemy" Ward was able to put into words the doubt, the pain, the clarity, and the hope of many dealing with depression.

“Feeling like I can be anything I wanna be, but I know I'll always be my greatest enemy,” he sings. “…I'm trying to break out of this feeling like I'm in a casket / I can't get past it, all of this madness…I don't wanna feel this come down.”

When the video — animated by Toronto’s Luca Tarantini — was released, the band encouraged donations to Canada's leading Centre for Addiction and Mental Health (CAMH) hospital and research facilities. The song was recently used as hang-in-there message for the Blue Jays Home Opener.

Samaritan talked with Ward about how he’s doing, what led him to seek help for his depression, and how he feels about going public. 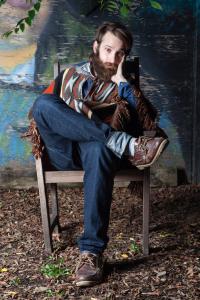 Have you gone on YouTube and read any of the comments under "Greatest Enemy"?

Well, you should because they're pretty incredible. One person wrote that lyrics and video were “about inner conflict and self destruction, followed by understanding, reunion and self love.” You have some smart fans on there. One says depression is a demon. People are really identifying with the lyrics.

What I read you were dealing with depression on your own for 15 years. Does that mean you didn’t get any treatment? Did you feel you could get through it on your own?

I fell into my first depression when I was 18 and I didn't even know what depression was. I was just like, ‘Why am I feeling this way’? And so I ended up after two years going to my general doctor and taking medication. And then it all just went away. Then I had like seven years of freedom and good times, and then it came back. I went back to my general doctor, but at that point my only treatment was getting medication.

Now this new bout, which has been the worst yet, happened last November. And it was so bad that I checked myself into a hospital and said, ‘I need to do more than medication. I need to figure what's going on. I need to do other things in my life, such as accepting it.’  That's a huge part of it. That's literally what I'm talking to my psychologist about right now is how to accept this and how to realize that this is a part of me and it always will be.

So, for sure, the last year has been a time when I've done everything. I've read every self-help book; I've done meditation; I'm exercising; I'm being social; I’m trying not to self-isolate, anything that I can think of. Therapy. I’m doing tons of therapy. This last session put me over the edge where I said I needed to look at all the angles and do it more of a holistic approach as opposed to just medication.

During this crazy difficult year, where not only are we forced to isolate and we're not doing the things that we normally would enjoy, but maybe we've also experienced the death or illness of a loved one.  It can be hard to recognize if your sadness, or depression, is situational or clinical. When do you think it’s time to seek help?

If there's even a thought in your head that you might need to seek help, that's probably a good indication that you should seek help because if you're not feeling right or you're having dark thoughts or your self-esteem is low, or any of the other myriad of stuff that comes along with mental health issues, then I would strongly suggest, even just [getting] therapy. Therapy is good for everybody. That's a good way to start and reading up on it and learning about it and trying to at least identify it, so hopefully you can move forward and learn about yourself and start to accept what's going on inside of you and be able to put a finger on it. All this stuff, I think, will help you get to a better place because you're no longer hiding from it or scared of it or worried about it. You can confront it and start learning to accept it.

I say that and, believe me, I’m the first guy to tell you it is not easy. Mental health is the greatest mystery to me in the entire world. Why it comes when it comes? Why it’s there at all. I’ve spent hours and hours and hours in therapy trying to figure out why I get depressed and why I get anxious. And it's a really complicated, complex thing. So to answer your question, why not get help right away? No harm in it.

It’s been said because of societal pressures, it’s harder for men to reach out for help.

It hasn't been that long for you. You're obviously still dealing with it and it will be ongoing. Having a conversation with me about it, and other people in the media, and writing a song about it, at some point you said, ‘I'm going to go public. And I don't mind if people ask me about it.’ Also, you've got bandmates who must be on board with that as well. What was that conversation like?

Also, you know what it was, when we put out ‘Spirits,’ I got flooded with emails saying that the music that we were writing are helping people through hard times. I always read direct messages because they're always positive and nice. And so people would send me direct messages, like “My mom had stage four cancer and we're in the hospital listening to your songs.’ ‘I just got back from a service of duty and I have PTSD and this song ‘Spirits’ is helping me through.’ So it was that that made me go, ‘Okay, I'm willing to talk about my struggle publicly because if it even helps one person or make somebody feel less alone, then I'm feel like I'm doing my due diligence as a person who struggles with mental health.’ So I weighed it out and me and the band, as a unit, decided that it was probably a good thing to talk about it publicly in the hopes to make people feel less alone and to know that they're not struggling alone.

When you were writing the lyrics for “Greatest Enemy,” I’m guessing you want to put your struggle into it, but don't want to be overly depressing. You want to have hope, right? Did you self-edit or was it easy?

Those lyrics were written in about 10 minutes. It poured out of me. I don't even think we did any edit on the verses, other than a couple of swear words that we took out. Other than that, the lyrics and the verses I wrote within the first 10 minutes.

Your co-writer, Steve, has he gone through something similar or was he more your sounding board?

As far as I know, he hasn't gone through a similar thing. He’s just a great songwriter and he is empowering because he didn't change the lyrics. He helped write some of the chorus lyrics. Fun fact, the song was originally called ‘My Own Worst Enemy’ and it was in that songwriting session with him that we changed it to ‘Greatest Enemy.’

“You’re your own worst enemy” is such a common phrase. Do your friends and family say that to you a lot?

I had a friend commit suicide early this year. How do we clue in and what can we do? Have there been any tools that professionals you've worked with said that people around you can do?

That is amazing question. And the thing with me is because I'm an attention seeker and I'm a very social guy and I talk a lot, I was always very open about it. And as soon as I got that depressed, I called my family over. Everybody was in the family room and I said, ‘I’ve got to go check myself hospital. I'm not doing well.’ So in my personal situation, I'm very vocal about that stuff. So my family knew right away and they're very supportive and awesome, and I told them. My brother came over to my house every single day for the last year to talk about depression.

When it comes to identifying it in others, isolation [is a clue] — people isolate themselves a lot and don't want to go out anymore and don't want to do anything. Their ambition’s low.  I know one story of somebody who just stopped doing work; they were at work and they didn't do anything. It's a red flag, like, ‘Wait, what? Usually, you're a pretty ambitious person. Why are you not doing anything?’ So there might be little telltale signs like that.

Of course, there's that cliché, where people will say, ‘You’ve got this great life. You have family. You make a living fronting a band that gets to tour around the world.’ They don't think that you could be depressed or should be depressed.

It's true. It's so tricky because you're saying my life to a ‘T’. I have a great life. I have three amazing children. I have a great house. I have a great band. All these things are totally true, but none of that stuff matters when mental health or depression kicks in because depression is this powerful demon that just takes all that away and makes you feel numb and nothing and empty and sad and self-loathing. I's just this unbelievably powerful thing that goes on inside of a person.

I think that's why it's so hard. It's hard to express that to people. It's hard to say to somebody, ‘I don't know what's going on with me, but I'm completely broken inside right now.’ It's hard to put that on your family. You feel shameful if you're like, ‘I'm sorry that I’m like this, but I am.’ So I understand why people don't talk about it and then all of a sudden they commit suicide because it's hard to talk about it publicly, even with family or even with anybody. It's a very tricky situation.

What are you hoping will come out of going public? The press release mentions CAMH. When life gets back to normal, post pandemic, will you do keynotes or talk to youth, or are you going to keep it within the music and your song lyrics?

If you or someone you know has suicide-related concerns, please call the Canada Suicide Prevention Helpline at 1-833-456-4566.