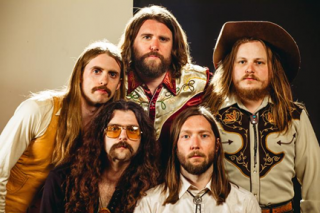 Saskatoon rock band The Sheepdogs will donate a minimum of $15,000 annually over the next 10 years to help support and highlight various local charities, with a particular focus on organizations that benefit Indigenous people in the community.

Some of The Sheepdogs’ planned donation money will also be used to help specific individuals who don’t have the financial means to access education and music lessons, with a focus on supporting Saskatoon’s BIPOC community.

The announcement commemorated the 10th anniversary of The Sheepdogs being the first unsigned artist to grace the cover of Rolling Stone magazine, a contest which helped launch their career. It also coincided with the 10th anniversary of its first performance at the Saskatoon Jazz Festival, and the group members felt the time was right to show their support for the community that supported them when they were first starting out.

The Sheepdogs have placed 10 singles in the top 20 at Canadian rock radio, with seven of them reaching number one. “Keep On Loving You” from the band’s latest release, No Simple Thing, has enjoyed eight weeks in the top five. The Learn & Burn and The Sheepdogs albums both achieved platinum sales status. The band has been nominated for 10 Junos Awards and won four.

Samaritan talked with Sheepdogs bassist Ryan Gullen about the band’s charitable initiatives as well as what the group has been doing through the pandemic and its future plans.

Why did the band decide to launch a charitable initiative?
We wanted to do something that would impact the community that we’re from that would also allow us to use the platform that we have to highlight and directly address the needs within the community and take a piece of our success and give that back. What happens in a lot of places, Saskatoon included, is that there are certain organizations that get a lot of support — whether it’s from the government or from charitable giving — and others that maybe aren’t as glamorous or aren’t as good at publicizing their needs that could use our platform to help encourage others in the community to support them.

Why did the band decide to focus on organizations in Saskatoon that support and benefit Indigenous peoples in the community?
In our city there are a lot of people in the Indigenous community that are in need, so that’s why we did that. As of late, talk has increased about Indigenous issues with the finding of the bodies and residential schools, but this is something that’s been on our minds while growing up in Saskatoon. We wanted to highlight that as part of what we’re doing and make that a focus. We recognize that there are a lot of inequalities that exist, growing up white and privileged in Sasktaoon, and recognizing that there is a large divide in the city. We want to do what we can to build up the community along with other communities in need.

Do any band members have Indigenous ancestry?
No. I have some family members who are Indigenous through marriage and cousins, but we’re all very white with European ancestry.

How will the organizations and charities be chosen, and can you name any of them?
We’re still having conversations right now. One that we’ve already supported this year is a really amazing organization called Okihtcitawak Patrol Group that provides wellness checks for people who may be experiencing helplessness. They provide wellness checks and food items and sanitary items and make sure people are OK and to see if they need any assistance with mental health. They do some really great work in the community. Another organization that’s doing really great stuff in Saskatoon right now is a safe injection site run through Prairie Harm Reduction.

Beyond giving to charities and organizations, tell me about the money that will be given to individuals.
We want to identify individuals that we can support on a more micro level and help them access music education. There are great organizations like MusiCounts that provide some of that, but we recognize that some of those organizations may not impact individuals directly. So if there are people we can identify that would benefit from having music lessons or education or instruments purchased, we’re going to identify those needs as well and have a music aspect to it.

How will those people be identified?
We want to be fair and transparent with what we’re doing. We don’t want to be seen as playing favourites. So at this point it’s fairly early on in figuring out how this will all work. But our goal is to identify people through talking to people or working with organizations. There are a few organizations in the city that I understand provide some of that, so we’ll look at how we may be able to partner with them.

How did the band decide how the money would be raised, and the amount that would be given out?
A lot of how we make money is through live performances, album sales and merchandise sales. So we identified that we wanted to give a portion of all of those proceeds. The last year-and-a-half has also shown that there may be years where we’re not working, so we wanted to commit to not just giving when we’re active. Even if we weren’t playing a lot of concerts or selling a lot of music, we still wanted to commit to a minimum of $15,000 to be given back to the community every year for 10 years. The idea is that it’s a minimum of $15,000 for the next 10 years.

If $15,000 is a minimum number, do you have a maximum number as well?
There’s no maximum. This isn’t something that we want to put huge parameters on. The biggest parameter was that we wanted to have a minimum, knowing that there will be some years when maybe we wouldn’t sell enough tickets or albums to meet that mark. But if that number is much larger, we’re not going to put a cap on it.

Is it based on a percentage of sales?
We want to donate one dollar from every ticket that we sell for any concert that we do that’s ticketed, as well as a portion from events where we’ll make a guarantee and aren’t being paid by ticket sales, where we’re give a portion of the proceeds like at festivals. There will also be one dollar for each album or merchandise item sold.

Has the band been involved with any other charitable or philanthropic efforts in the past that you can highlight?
Over the years we’ve tried to do what we can. Our drummer Sam (Corbett) had testicular cancer, which was a very tough time for our band, so we’ve been very much aligned with Movember. We ended up raising $17,000 a couple of years ago through doing a funding drive with them. Cancer is close to us. Sam’s father had prostate cancer, Sam had testicular cancer and my father passed away from cancer a couple of years ago. Outside of that we were recently involved in supporting lots of local stuff. We did a concert for Nutrien Wonderhub, which is a really great facility in Saskatoon for children. But over the years we’ve been involved with other things, such as donating signed things for raffles. Sam, our drummer, has done some emceeing for fundraising events. We’ve definitely tried to make that a part of what we do.

What are the band’s plans for the rest of the year, or is that still up in the air due to COVID-19 and its accompanying restrictions?
It’s been a very big hurry up and wait type of year. We’ve done very little over the last 18 months. We’ve been performing and are in the Ottawa Valley right now performing as part of a distanced outdoor concert series. The next thing we have on the books is a European tour in February if all goes well, and some festival shows and things like that over the next month-and-a-half. Right now we’re really focused on recording music and waiting. One of the challenges that we definitely face in our industry is that part of you wants to get out there and play as soon as you can and perform because that’s so much of what we do, but we don’t want to rush things and put people in a position that could compromise their safety. All of the things we’re doing are fairly regulated and feel safe or are outdoors.

Are you recording now, or have you been recently?
When the pandemic hit, we were going to be going to Portland to record a full-length record. But that didn’t end up happening. So we pieced out seven songs from that record and made an EP that came out in May. We’ve been actively recording throughout the whole pandemic whenever we could and were allowed to because some shutdowns didn’t allow us to be in the same room together. We have seven or eight songs that are recorded now. We’ll put out more music as soon as we can.

Is Warner, your record company, on board with that type of schedule as well as with this charitable initiative?
They were very supportive of the initiative and have been supportive of us as a company for things that we’ve done in the past, such as our partnership with Movember. They’re very supportive and open to taking cues from us in what we want and the vision that we have. We’re very thankful for that. Everyone’s trying to navigate things right now. Things are unprecedented in our industry, with things completely stopping and not knowing how and when things will go back to normal.