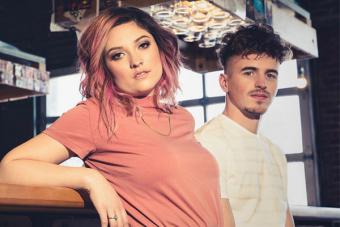 Spruce Grove, Alberta pop duo Jenesia are attempting to succeed in the music world and be a force for the positive, but have some pretty heavy and personal topics to discuss.

Formerly known as Soap Box Duo, spouses Alexander & Jenesa MacMullin have been doing the work. Their song "Greenback" won the anti-poverty My United Way Voice songwriting competition in 2017. One of the band's causes is the prevention of childhood sex abuse and this song explores that topic.

Jenesia also recently visited Haiti where they checked in on the Floriana Wedding Project, a small scale community project that enables women to rent or buy wedding dresses, as well as the Reveil Matinale Orphanage Foundation and Haiti Children’s Home.

Samaritanmag spoke to Alexander and Jenesa about Haiti, fighting poverty and sexual abuse, and the best ways to support those in need.

Your band won the My United Way Voice music competition. What is that?

Jenesa: The Edmonton capital region here in Alberta does a contest called My United Way Voice competition and it's been running a few years now and the objective is to have artists write a song about poverty.

Alexander: We wrote a song called "Greenback." We haven't released it yet. But it's on YouTube. We wrote it talking about one of our biggest passions, which is trying to prevent childhood sexual abuse and that song touches on that a little bit. We realized the connection between poverty and childhood sexual abuse, the risk is a lot higher for people in those situations. So that's where that song was inspired for us.

Childhood sexual abuse isn't exactly a popular topic for pop music. How do you reconcile such a heavy theme with making the music you make?

Alexander: It's pretty difficult and we're working through what's the best way to do it. We tried for our album. There's one song called "Catch-22," which talks about being addicted to pornography, which is already a pretty difficult topic. We didn't want it to be too heavy and most of our songs are pretty light as far as the topics go, and then we have a couple really heavy hitting songs. Normally we have to be pretty careful where we play these songs and where we talk about this issue because not everyone is ready to talk about these things. Everyone knows about it, but talking about it on stage could make some people uncomfortable unless they're kind of prepared for it — if people are coming to a show that's our show, and it's at a venue where we're hosting at that's a great place to talk about it. But if we're just on this big stage, playing in front of people who've never heard of us, we just play our songs and talk about who we are. The more they get to know us, then the easier it is to talk about that.

I have a story of my own from being abused and because I have a relatability with people, I have an opportunity to talk people through something they're going through. I know what it's like, so it's going to be easier for people to believe what I say is important. And I want to share my story and let people know there are resources. I can get into the specifics. It's our main goal to just bring people to a place where they can improve their life because I know what it's like and it's a really sad thing.

Every band has to figure out what it stands for, what causes it's going to support and how much social justice will be part the things you do. Often the connection between art and causes isn't always obvious. How can music makers help to fight poverty?

Jenesa: I think the biggest thing is realizing the level of influence that we have as artists and using that to our advantage. We generally have a larger platform of people we're able to speak to, and because we play music it gives us a point of interest for people, so they tend to be interested in what we have to say. Talking about fighting poverty, you can rally people together, to connect with your fans and other people in the community.

I've always been a passionate musician, but I really wanted to affect the legal system here in Canada on a lot of points, so I considered pursuing law. And I remember thinking the downfall to that is if I'm looking at poverty I'm working within a particular construct in that system and I don't necessarily have a lot of power to change those constructs. And what changes people's attitudes and what gets people impassioned? It's things like television and music that's affecting how people view the world and gets people sympathetic or empathetic towards other's conditions.

You recently went to Haiti to visit an orphanage as well as some charitable programs happening in that country. Tell us about that.

Jenesa: We went to do a mini-documentary and the organization we travelled down there with is called the Floriana Wedding Project. It's run by a woman from Burlington, Ontario (Nicola Topsom) who I was friends with from back here in Alberta. Their main objective is to create industry and to inspire community. What they do is collect wedding dresses here in Canada, which people usually wear once and do nothing with afterwards and take them down there and they have a shop or a couple of shops that are run by Haitians that they can either rent dresses out or sell them. The money that's collected through the sale and rental helps to go back into the community.

Alexander: Haiti was the place that was really close to Jen's heart. She's been there so many times before and we already have all those connections there so when we went we had lots of people to visit and talk with and there's a lot to do.

For things like this there's a bigger concept to address. When you go into an area that's been affected by disaster or war or poverty and you really want to help, how do you do that in a way that's not "white saviour complex"?

Jenesa: That's a real struggle for sure. That is a hard one. We had a really good conversation with the director at Haiti Children's Home in Mirabelle and there's a couple of clips that appear in the documentary and she talks a lot about that. She's been there 12 years now, she married a Haitian and they have some adopted children and some bio children, so she has a lot of experience just understanding the Haitian culture and she was really honest. She actually broke down because she felt so poorly about her original perspective — about coming in and what you said, that saviour complex, the "Oh I know better because I'm in a more developed country, and maybe I have a higher level education and I'm going to go in and effect all this change."

What she was sharing with us was that she realized how unfortunate that perspective is because I think it does make us more prideful or judgmental when we walk into a country or a situation that has had different struggles than we've had historically. But I think she was really empowered by the spirit of the Haitian people specifically and understanding that their parents — she works a lot with children — they have a milk program there. She's like, "They're parents like I am and they know what their children need." Their milk program allows them to bring their child in to get weighed when they're first born and then they're given a few courses on ways to help improve their children's nutrition and they're given some formula, and they come in every two weeks to have their child checked.

And she said there was something like 200 children who would have ended up in adoption just because the parents honestly feel the best thing they can do for their kid is get them greater opportunity for nutrition and health and all that kind of stuff, whereas this program was empowering these people and telling them, yeah, you have what it takes. I think that that's a great example of a way to go in and partner with people to give them a chance to do what they already want to or dream of doing without creating a handout system or a correctional approach where you come in and go, "Oh you're doing this wrong and I'm going to show you how to do it better." It's more like, "How can I help you to accomplish as a dream for yourself and your country?"