Life in Attawapiskat, the isolated First Nation community on the western edge of James Bay, isn't easy. There was a suicide crisis in 2015-16 (an estimated 100 of Attawapiskat's 2,700 residents attempted to take their own lives during this time). A housing crisis in 2011-12 brought on by flooding and inadequate infrastructure required substantial investments just to meet the community's basic needs. And, last year, high levels of a chemical byproducts in the community's water plant caused a water crisis which necessitated the use of two emergency reverse osmosis filtration systems being used to supply the community.

Attawapiskat resident, solo musician and frontman for rock act Midnight Shine Adrian Sutherland has seen it all. And he's not impressed.

Sutherland, who's also an artist ambassador for the Downie Wenjack Fund — launched by the late Gord Downie in honour of residential school runaway Chanie Wenjack, to improve the lives of Indigenous people by building awareness, education, and connections between all Canadians — released the pointed protest song "Politician Man," in which he asks, "Hey, Mr. Politican Man, what have you done for me lately?" The answers are... uneven.

Samaritanmag spoke to Sutherland about "Politician Man," the Far North, and the issues in Attawapiskat. 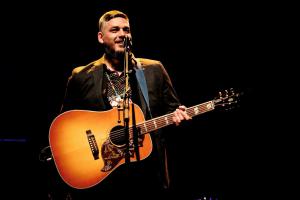 Have you been affected by the coronovirus in the North?

Here in Attawapiskat and other fly-in communities on the James Bay, unnecessary flights in-and-out have been restricted, and the only items coming in are food and supplies.

So far nobody in Attawapiskat has contracted the coronavirus, and we hope and pray that continues. With the virus being as contagious as it is, and with many houses here containing multiple residents, it has potential to spread quickly and cause great devastation.

Spring is the time of our annual goose hunt on the James Bay, and my family will be taking part this year. We are heading 170 km north of the community to our camp on traditional grounds, and will spend six weeks isolated from the rest of the world. This hunting retreat couldn’t come at a better time.

For those with no experience with the North, can you paint a picture of your community?

Obviously the North is a very vast piece of land. It's huge area, but there are a lot of little small communities that exist up there. I'm from Attawapiskat and our community is located on the west coast of James Bay. It's considered one of the bigger communities on the coast. Historically, our industry was the fur trade and then that died off and people were still out on the land for subsistence living for many years, and then the mining industry showed up in our backyard and that kind of stimulated the economy a little bit. A few families did really well because of where the mine came in.

We're about 2,700 people on the reserve. There are about 300 homes that exist there in the community. They don't quite have all the amenities that a city would offer; there's a pharmacy;  there's a couple restaurants; there are a few convenience stores here and there, but for the most part not a lot has changed in the last 20 of years.

Logistics is a big challenge; the cost of living is extremely high. It's extremely expensive to do anything up there so as a result there are a lot of challenges around building houses, just the cost of bringing stuff in is often a major hurdle to overcome.

Attawapiskat has been in the news a number of times over the years. What are some of the issues that have been in your community?

Well, the most recent one would be the water issue. Going back five six months, to this summer, we were put on alert that our water was contaminated. So contaminated that you couldn't even bathe in it for two minutes.

It's been long known that the water has been terrible up there, ever since they brought in running water, which goes back 30 years ago. Initially the running water was just brought in for the people coming in from the South for work, to fill positions like teachers, nurses, that sort of thing. Most of my childhood and through my teens I was bathing with a basin and no running water and we had outhouses.

People who live comfortably in cities or small towns may have never even considered having no water. What's your day-to-day like when it comes to water?

I collect drinking water daily, sometimes twice a day. It's very time-consuming and it's physically demanding. There are five galloon jugs I carry. There are 10 at a time that I fill and sometimes I do a second trip in the evening when we're doing the water collection for cooking or whatever. Obviously bathing it's as quick as two minutes, that's a pretty quick rinsedown. And then you have children. What do you do about the children? So we bathe our little one in just a little bit of water and we get him to stand. It's always on your mind when you put a child or a baby in a tub knowing that this water is contaminated. The cumulative long term effects of doing this are cancer and other nasty illnesses.

You recently released a song called "Politician Man." Is it about Justin Trudeau?

I can't say that it is about him specifically. However, he was in my mind when I was writing the lyrics. There were a few others as well, the [former Canadian federal] Harper government, those are the kind of things that were going through my head as we were going to write. As you know, people made promises that they're going to end the boil water advisory for the 100+ Indigenous communities across the country and then you don't do it... well, you basically made these commitments and you don't fulfill them, what kind of person does that? If I commit to something I'm going to try to fulfill that commitment. 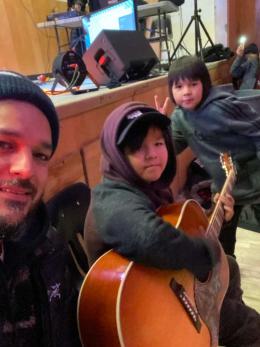 In your experience, when politicians say they're going to support an issue, what have results been?

But for water I really haven't seen a lot of movement. Once all the politics died off it comes down to, "OK, what's going on? What are we doing?" There was a commitment to put money into the facility and I honestly don't know what's going on there. I know that the two dispensaries for drinking water have been replaced... so the government did come in, [federal Natural Resources] Minister Seamus [O'Regan] committed to doing it, which they did. But again the bigger picture is the whole system, right, that's where I think they need to commit 100 per cent and say, "OK we're going to fix this thing."

You're also an artist ambassador of the Downie Wenjack Fund. There are a lot of well-intentioned people who want to do good, to support reconciliation, but don't know where to start. Are there places you can point people to?

I think just doing your due diligence. I think you really need to understand the history. In order for us to move forward we need to understand the past. I know for me it's been difficult journey. Being a child of a residential school survivor and even for me looking back at my mom's story, it's been a difficult one for me, so it's hard for me to look at my own history, my own past and try to learn a little bit more about what went on. My mom and my aunts were all there and other relatives. And to try to understand why they behave the way they behave today with alcoholism and abuse and violence and that sort thing... that all stems from it.

"Politician Man" isn't the only cause- or issue-related music you've done. It's not joyful work to make songs like this that are confronting issues. Why do it?

I think it certainly puts myself in a position for people to take shots at me. And whether it helps my career or hurts my career, it doesn't really matter whether it's going to advance my career. Personally, I know that if I don't say something and I don't do something I'm pretty sure nothing will change or happen. And there's no guarantee anything will change if I do anyway. But if I don't try, I know for sure nothing will ever change or happen.

I'm still like an outcast. I feel like I'm annoying people sometimes with the music there, how much I'm in the media, and then "Politician Man" comes out and it's not just directed at federal politicians and provincial politicians, it's directed at our own local chief and council, so I wouldn't be surprised if it upsets people at the community level. So yeah, it's not fun sometimes knowing that I could upset people, and ultimately put myself in a position where I'm not liked very much. But it's a catchy song.

What results are you hoping to get from songs like this?

I want people to understand and I want to try to educate them. That's always something I was told to do, you need to make sure people understand who we are, understand our ways, and I try to do that with everyone I meet whether it's over coffee or lunch or whatever setting I'm in.

Before I really got into the songwriting and singing about my life and my experiences I never thought anyone would give a crap about my life or my own worldviews as an Indigenous person raised in the Far North. I don't know if a song will ever save a life, but at least I try to instill hope in people and I feel like that's what I'm trying to do, it's to try to instill hope in young people's lives.