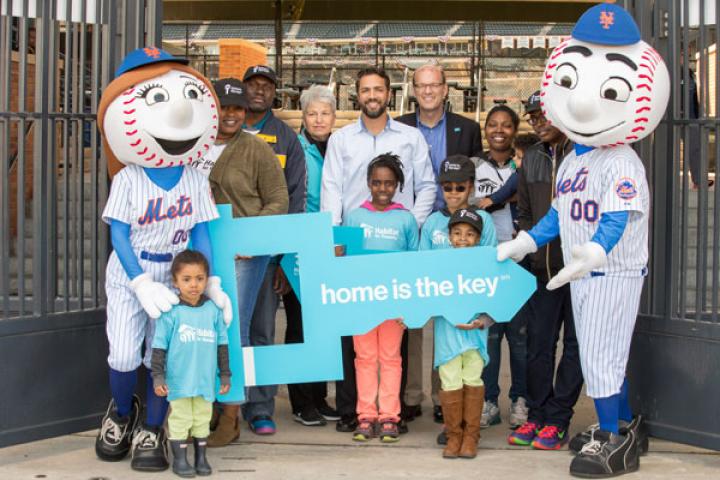 It's getting increasingly difficult for North American families to find fair and secure housing and Habitat For Humanity wants you to know this has become a crisis.  Active in more than 1,400 communities across the U.S. as well as in 70 other countries, the organization builds affordable homes for low income families and its just-launched Home Is The Key campaign aims to raise awareness about the dire straits many families find themselves in (use #HomeIsTheKey on social media).

According to Habitat for Humanity, one in four households in the U.S. dedicates more than 30 percent of its family income to housing. At present, there is nowhere in America where a full-time employee earning minimum wage can afford an average one-bedroom apartment. These housing barriers mean there's less money for things like a family's food and clothing.

Samaritanmag spoke with Habitat For Humanity CEO Jonathan Reckford about the sociological benefits of secure housing, how the organization plans to navigate the Trump government and why it's so important to tackle the housing crisis right now.

What are some of the factors that make it important to launch the Home Is The Key campaign right now?

Habitat For Humanity is launching Home Is The Key to bring awareness to how dire the need is for safe, decent and affordable housing in the U.S. and around the world. In the United States, there are more than 11 million households paying more than 50 percent of their income on rent. And there is nowhere in the U.S. that a person making minimum wage can afford a one bedroom apartment. So it really is at a crisis level. And the thing is this is worse than the rest of the world. And that's why we're launching this month-long campaign in April. to increase awareness and give people a way to connect and hopefully be part of the solution.

What are the ways in which having stable housing benefits families?

What we see is that a decent home is the foundation for a decent life for a family. More than the bricks and mortar, there's overwhelmingly strong data that when a child grows up in decent housing she stays healthier. And when you stay healthier, you do better in school; you have stronger educational outcomes. If you do better in school, you have a chance to earn a livelihood to be able to lift yourself up. If you pull housing out of that equation, it's just the opposite and you're stuck in a cycle of poverty. Because if you're in poor housing, you often stay less healthy, you do worse in school, and then you're less able to support yourself.

The most basic human needs are air, food, water and shelter, right?

Absolutely. One thing we watch is cities used to be much more mixed. There would be mixed incomes, mixed use, and now increasingly we're more economically segregated. And I think that makes it easier for those who've always had good housing to ignore the problem. We've also seen that very often people in power, both economic and political power, rarely grew up in poverty housing, so it's not visceral to them in the same way. If you meet someone who really broke out, which is a statistical anomaly, sadly, for all the reasons we just talked about, they get it. But in a way, we've got to push this issue higher for those who don't know what it means to never have a decent place to live.

It makes sense that a lot of people who've never seen or experienced housing insecurity can't understand there's this very big invisible sector of people who deal with this every day.

There's a lot of speculation that a number of the new U.S. government's policies are going to negatively impact low income families' abilities to find secure housing. How does Habitat For Humanity intend to respond to this looming problem?

We planned the Home Is The Key campaign before we ever saw the White House draft budget, but we actually think the timing is good in that more than ever we've got to bring attention to how huge this need is. So we're going to be very active — we're already active. Habitat For Humanity serves in every single congressional district in the U.S., so really we're trying educate the members of Congress, who are going to put the first real budget out on how crucial housing is in their community. So we have released public statements and we're going to be very active in advocacy efforts to try to educate lawmakers at the local, state and federal level about why we need more support, not less, for affordable housing.

How do you determine who's eligible for a Habitat home?

First you have to be too low income to get a conventional bank mortgage or qualifying loan. Second, you have to be willing to partner. And for us, that means putting hundreds of hours in what we call "sweat equity," literally building your own home and your neighbours' homes and volunteering. Third, you have to demonstrate that you can qualify and pay back an affordable mortgage that's targeted to no more than 30 percent of your income. So for families that meet those criteria, they can qualify. To learn more about that, they can go to habitat.org, find their local Habitat organization and find out how to apply.

Considering how many people need help like this right now, how do you prioritize who you help?

That's the most heartbreaking thing for us. Literally, again, this is why we're doing this Home Is The Key campaign, because even though Habitat For Humanity is the largest private homebuilder in America, we know we can't build our way out of this by ourselves. So that's why advocacy and policy change is so important. In many ways, what we want to be is a demonstration project for what is possible. So we want to really give away our tools, knowledge, methodology because we want everyone to get engaged in this issue. And we really believe that if society doesn't invest in housing, we'll end up paying a much higher price in terms of health, education and all the other negative outcomes. It starts with land, it starts with financing, but it's really removing the barriers that stop families from being able to take care of themselves.

What ways can average citizens make a difference?

There are so many ways. One of the myths about Habitat is that you have to come out and do construction to help. We actually really want people to engage as advocates, as donors, and if people go to habitat.org, they can learn how to get involved with Home Is The Key. Sharing with their friends and families through the hashtag #homeisthekey and they can learn more when come to our website with all the ways that you are able to volunteer, advocate, give and become part of the solution. So that we can unlock the opportunity for every child in Canada and the U.S. and across the world to know what it is to have that safe foundation that is so key to the kind of lives that we all want.