Surfing isn’t the first thing that springs to mind when thinking of the Gaza Strip, the small Palestinian territory bordering Egypt and Israel and governed since 2007 by Hamas, the Palestinian Sunni-Islamic fundamentalist organization regarded by the United States, Canada and the European Union as a terrorist group.

Yet Gaza’s perch on the eastern coast of the Mediterranean Sea makes it strategically ideal for catching waves. Its fraught politics and decimated landscape, meanwhile, makes any escapist activity appealing.

Real-life Gaza surfers are the subject of Gaza Surf Club, a new and pointedly apolitical documentary which follows young surfer Ibrahim and his mates in their daily lives while chronicling Ibrahim’s quest to establish a U.S.-style surf club in Gaza, a mission that leads him to the surfer Mecca of Hawaii. It’s a unique respite and distraction for these young people, living in an overcrowded bordered-area where they are not free to come and go as they please.

As might be expected in a region sometimes referred to as "the world's largest open-air prison,”the mission to start a Gaza Surf Club is not an easy one. But Ibrahim’s struggle propels co-writers/directors Philip Gnadt and Mickey Yamine’s fascinating film which premiered last fall at the Toronto International Film Festival (TIFF) and is now available to audiences in Canada and the U.S. via Sundance Now network.

As Gnadt and Yamine tell Samaritanmag during a joint interview from Stuttgart and Berlin, respectively, Gaza Surf Club is uniquely poised to shed light on the multi-dimensional and utterly relatable people of a region typically portrayed as war-torn and inhospitable.

If art can’t change minds and spur change, then surely nothing can. 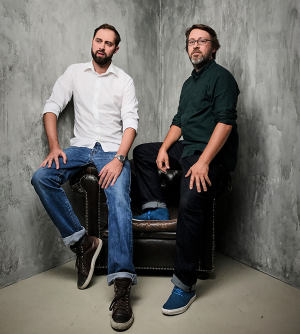 How did this story come to your attention?

Philip Gnadt: A very good friend of mine was born and raised in Gaza though he studied in Germany. That raised my interest in the area generally. Then about five years ago I found this article about surfers in Gaza. It was so different from what I had heard and read about the region and it got me thinking that it could make for an interesting documentary. That was the beginning.

Mickey Yamine: To some degree. We started wanting to make a film not just about surfers, but about other kinds of youth culture in Gaza, like break-dancing and Parkour. After our first research trip, we thought the surfers were interesting enough for a film. On the other hand, we didn’t want our film to be political… not very easy when making a film in the Gaza Strip. But I think we succeeded in that regard.

Philip Gnadt: And because we wanted to show a different side of the Gaza Strip, we wanted to underline our film with widescreen shots and a very calm camera as opposed to the hyper-video footage you often see from the area. We loved the colours there and wanted to really show them, which was another change from concept to final film.

What was the hardest thing to get right with the movie?

Philip Gnadt: It was such a big project – it took us about five years – and there were ongoing challenges. In the beginning, the question was how to get in because it’s very isolated unless you are an NGO or a politician. Then equipment became the question: do we use stuff from there or bring stuff in? The insurance was very high. Finally, there was the question of how close we allow ourselves to become with the protagonists, which I guess is true in every documentary. Plus, it was hard to find the right storyline in then editing process because we had more protagonists on camera than we could meaningfully follow, and we had to narrow it down to three.

On that point, one of the most powerful people in the film is Sabah, a 15-year-old surf-enthusiast girl you film surfing without her headscarf. Any blowback from that so far?

Mickey Yamine: It’s not exactly illegal for girls to surf there but it’s heavily frowned upon and not really accepted in their community. The few who do surf try and keep out of the spotlight. Sabah doesn’t surf much anymore because she has gotten too old, but when she does, her father basically takes her way out and then drags her behind the boat, more like wakeboarding. Our co-producer, my cousin Stephanie Yamine, was with us in Gaza and managed to gain her trust. That’s one of the only reasons we could include Sabah in the film.

As for repercussions, none yet but the film hasn’t been released in Israel or Gaza. The only surfer from Gaza who has seen the film so far is Ibrahim and that’s because he lives in the U.S. now and attended a screening in Oahu. We are hoping to organize a screening in Gaza this summer, but it’s hard because there are no theatres there… they have all closed down.

Surfing is usually surrounded by a larger lifestyle culture. That doesn’t really exist in Gaza. Do you think that makes the sport purer for the Gaza surfers?

Mickey Yamine: I’m not sure I’d say it’s purer. It is an escape from reality and maybe the clothing and vanity of surfing is absent [on the Gaza scene]. But in Hawaii, surfing is almost a spiritual thing. So, I’d say surfing in Gaza is detached from consumerism.

Was anything left out of the film that you would have liked to show?

Philip Gnadt: Not really. From the beginning, we avoided politics and tried to use these 90 minutes to tell a different story. But of course, when you are there filming every day for six weeks, political conversations arise. We had one fellow complaining about Hamas who wanted us not to include it because he feared trouble, which was fine because we weren’t telling that story. In general, we could use everything that we had.

Mickey Yamine: And there were no taboos about what we could use, no network involvement or commissioning editors. These edits are ours. People have asked us why we left the politics out of our film when it’s such an important issue. We figured that anyone seeing this film is either a surfer and not really interested in politics or is interested because it’s Gaza. And if you are interested in Gaza, you already know about the place and are either pro- or anti-Israel or Palestinian. It’s not for us to comment on that. This film is a window into what Palestinian life in Gaza is like. There’s no narrator; the film is told from a civilian perspective.

What will success look like for you with this film?

Mickey Yamine: No one makes documentaries about Gaza to get rich, that’s for certain. Success is measured in people wanting to see the film, in its being screened at different film festivals and being covered by the media. We’ve had so much attention and incredible feedback from all sides. The last and only thing we can achieve is getting attention for the Gaza Strip as a whole and especially, for our friends there who are surfers.