Lady Gaga’s Little Monsters, her pet name for her fans, aren’t monsters at all. Tales of carnage and woe may dominate headlines, but for every negative news story reported, there is a compelling and inspirational real-life incident of kindness just waiting to be shared. Where, you ask?  Channel Kindness.

Providing an outlet for those stories, notably by and about young people who are often marginalized in the mainstream press, is the concept behind the just-launched Channel Kindness, a new inviting online initiative from the superstar musician, who once had a Born Brave Bus on tour as a safe space for young people to learn about local resources on anti-bullying, suicide prevention, and mental health services.

Spearheaded by the Born This Way Foundation — co-founded Lady Gaga and mom Cynthia Germanotta in 2012 “to support the wellness of young people and empower them to create a kinder and braver world” — Channel Kindness is “a new digital platform featuring stories of kindness as documented by young people from around the U.S.,” a press release explains. 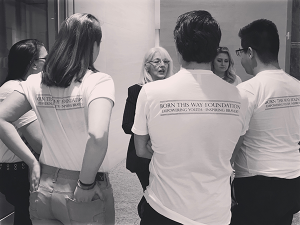 “These youth reporters, ages 16 to 24, have been recruited to identify and document the acts of generosity, compassion, and acceptance that define their generation and shape their communities.  This content – which will include videos, first person essays, interviews with youth leaders, and more – will serve as a counterbalance to a media landscape that often underrepresents or misrepresents today’s young people.”

Speaking to Samaritanmag from San Francisco, Maya Enista Smith, Born This Way Foundation’s executive director, insists there are “real physical, neurological and sociological” impacts for those “thinking about kindness and reading kind messages.”

The effect of the flipside is well-documented. One study from the National Association of Social Workers reviewing adolescent health cited by the Born This Way Foundation notes that “nearly half of stories about young people are about crime, with African American and Hispanic youth even more likely to be included in such coverage.

“Unsurprisingly,” the Foundation continues, “a survey of young people themselves found that 81 percent feel they are unfairly represented in the media.”

The stories on the Channel Kindness site take many forms. There’s an essay from 17-year-old Sophie Bernstein, a high school junior from St. Louis, Missouri, detailing her dad’s frustration with highway tolls and toll booths and how an incident of pay-it-forward kindness turned a trying scenario into a delightful one.

California's Tyrah Majors, 20, meanwhile, shares a video about the Princess Project which puts needy girls in fancy dresses just in time for prom. What unites all the stories is positivity, even when palpable struggles are part of the narrative.

Where did this idea come from?

This was actually one of the first projects I started working on when I joined the Foundation about five years ago. It was called Project X. It came out of noticing how few stories are written about young people and how many of those are negative. It seemed like our generation was painted as apathetic and disengaged which just wasn’t consistent with what we were seeing among the young people we worked with. We wanted to create a platform for young people to tell their own stories. This just felt like the right time to launch it. So, Project X became Channel Kindness and a platform for young people to train their eyes and ears on reporting kindness, both heroic acts of kindness and everyday acts of kindness that shape our lives. 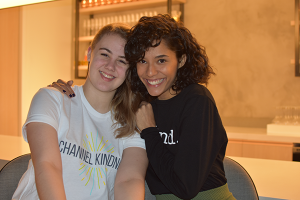 How was the initial ‘class of 50’ reporters currently featured on the site recruited? They are drawn from literally every corner of the U.S.

We had an application process and a nomination process. We were overwhelmed with the response. There weren’t specific criteria; we weren’t looking at people’s resumes. We wanted to know if these people had a story to tell. Did they feel their voice had power? Did they feel they wanted to use that voice on behalf of their community and their generation to tell a different story? I don’t know much about psychology but it feels like it’s human nature to overlook the good things. Having worked for the Foundation, I feel like I’ve been rewired to look for the positive. We wanted to find young people who were also willing to look at that first. And not in a naïve way; we all have struggles and challenges. If you look at the stories on Channel Kindness, it’s not puppies hugging kittens. There are real-life struggles but told through a lens of kindness and compassion and bravery and community. And I think that’s really what we looked at when we were whittling down the applications of these incredible young contributors we have today.

Who is ‘we’? Who else was on the panel whittling down the applications?

The Foundation team and our partners, plus Gaga’s management. We took the process very seriously.

A key part of Channel Kindness’ mandate is to “serve as a counterbalance to a media landscape that often underrepresents or misrepresents today’s young people.” Apart from social media and the website itself, how do you plan to disseminate these stories?

We’re just […] weeks in and still learning. But our partner organizations have been great about helping to spread the word. We just launched a partnership with Starbucks where the Foundation curated a playlist that exemplified kindness and compassion. (According to a Starbucks release, an 80-song Guest DJ playlist paying ‘tribute to love and kindness’ and featuring Aretha Franklin, Otis Redding, Bill Withers, Stevie Wonder, Whitney Houston and others has been heard at more than 7,900 Starbucks stores stateside since April 7.)

What are some other metrics to the site?

We have the public-facing content, obviously, but there are some behind-the-scenes things, too. We are creating mentorship opportunities for these reporters, we’re doing training on how to tell a story or how to create a podcast, how to follow-up and write thank-you cards to your reporting subjects. There’s leadership development work happening in the background. We can’t just talk about investing in young people. We also have to do it ourselves.

And to clarify: you are referring to your reporters as ‘reporters’ but it’s clear many of the young people writing stories and capturing video are already on different career trajectories.

For sure. If you’d read my bio at 18, you wouldn’t have guessed I’d end up where I am now. But the art of storytelling and building community transcends just being a journalist.

Are you looking to expand Channel Kindness internationally?

Definitely. We wanted to be realistic in our first year but given the audience of the Foundation which is international, I certainly expect this will expand to include a broader audience as well a broader representation here.

People associate the Born This Way Foundation with Lady Gaga. Why is Channel Kindness important to her?

What Gaga is about is authenticity and encouraging people to share their stories – their challenges and vulnerabilities. This is a platform that encourages people to do that. Just today, a PSA between Gaga and Prince William was released for a non-profit he founded called Heads Together (a mental health charity the Duke of Cambridge is leading along with his wife Catherine, Duchess of Cambridge, to help destigmatize mental health issues). I think that’s one example of how committed she is to sharing stories and encouraging others to do the same. At the end of the day, that’s what Channel Kindness is.

What will success look like for you with this initiative?

We want to popularize and embed stories of kindness into traditional news outlets, whether it’s your Facebook feed or Twitter feed. We want people to recognize the power of kindness – kindness to yourself and others – and we want to provide examples to that. We want to create a counterbalance to negative stories. There are many reasons to be hopeful.

So maybe Channel Kindness stories could serve as kickers to traditional newscasts, for example?

Sure, although those kinds of stories can sometime be token. I’d love for us to change the narrative, to say, ‘Yes these things happen and these are real struggles our country, our government is facing. But these things also happened, and they are beautiful examples of humanity coming up to solve challenges.’ I’d love these stories to be equally included in the conversations around our communities. Good stories and bad stories happen but if we could create a more equal narrative for both, we’d see a lot of benefits. Data shows there are individual and collective benefits to being kind, to thinking about kindness and reading kind messages. It’s not just some fluffy nice-to-have thing. There are real physical, neurological and sociological benefits to it.