Poppy Campaign: What Legion Does With The Money, How, When To Wear One

The red poppies many people are wearing on their coats right now aren't just a potent symbol honouring those who've fallen in the military service of their country; they're also a source of valuable support for veterans in need and their family members.

One of Canada's biggest volunteer initiatives, the Royal Canadian Legion's annual Poppy Campaign activates upwards of 19,000 people from across the country to distribute poppies and collect donations from their fellow Canadians. Last year these volunteers distributed 19.7 million poppies and collected $16.5 million in donations. This year they're expecting to distribute well over 20 million poppies. The money collected has a very clear purpose. 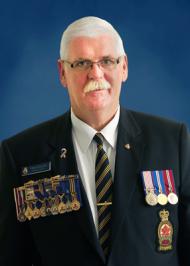 "That money has to be spent on veterans or their families," Tom Eagles, Dominion president for the Royal Canadian Legion, tells Samaritanmag. "We have very very strict guidelines on it. It's for the use of veterans.

"We have exceptionally strict guidelines because it's public money. If we misuse that trust and then the public's going to see that and probably not support a lot of the poppy campaigns we do now. But they see the money going out to the veteran in need.

"Just last summer I was in Ottawa and we presented a cheque for a million dollars to the Royal Ottawa Hospital for an MRI machine to do brain imaging machine to see how doctors can treat PTSD (post traumatic stress disorder). That's the sort of thing we do nationally. And locally, in the rural areas in Canada. You know as well as I do there are many legion branches all across the country in small villages and towns. They do their own thing locally for veterans or worthy causes."

The Royal Canadian Legion has 1,433 branches across Canada as well as in the U.S. and Mexico, with 300,000 members split between veterans, their family members and supportive citizens. The Poppy Campaign is often the largest project individual branches undertake each year. It's at the branch level where the Legion frequently helps out individual veterans in need.

"We have strict guidelines on the poppy trust fund because it's the public's money. It's not the Royal Canadian Legion's money, it's the public's money. And the Royal Canadian Legion manages it. We can't use that money to go into a branch to pay the light bill or the phone bill or the tax bill; that's not what the poppy money's for. The poppy money is for veterans and their families." 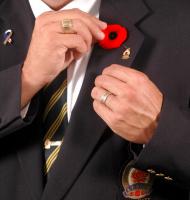 Worn traditionally from the last Friday of October until Remembrance Day on Nov. 11, the poppy represents, "a time of reflection," according to Eagles, "a time when we go on November 11 to the cenotaphs across this great country of ours to take a moment to reflect for what people have done for us who have lost their lives in war in the country we have today."

In recent years, much has been made of the protocols surrounding where to wear a poppy (on the left breast, above the heart is preferred), wearing a poppy out of season ("Am I going to tell people to take them off? No. They're wearing it; they're respecting it; they're thinking about some loved one that was lost," says Eagles) and, perhaps most contentiously, whether someone should remove the pin from the poppy for some sort of other fastener. A Canadian flag button, for example ("You're not really supposed to deface the poppy. The poppy has a black center with a pin").

Produced in Ottawa by Trico Printing, the poppies are manufactured then distributed to various branches. At the branch level volunteers distribute boxes of poppies to local businesses and community centres. These volunteers then pick up the donation boxes when the campaign ends. It's an operation that assumes a lot of public trust because these donation boxes are often left unattended. The system has worked for years. For the most part.

"When we put the poppy tray in a store and put it on the counter, it's through the goodwill of the owner that we're able to leave it there," says Eagles. "And people go in to buy their bread and they see the poppy there and they'll pick a poppy up. The unfortunate part across some parts of the country — and these incidents are isolated — a few get stolen over the two-week period. It's very unfortunate and I can't imagine anybody wanting to steal poppy money because that's the veterans money. But it does happen. Will it happen again? Yes, it will. Will it happen next year? Yes, it will. Sometimes they find the people; sometimes they don't. It's very unfortunate, but it's happened."

That said, if you want to wear a poppy there's no real excuse not to. Although donations are encouraged, Eagles explains the careful distinction between what the Legion does.

"The poppies we don't sell," he says. "We distribute. And if anybody wants to pick a poppy up and leave a donation, so be it. Most people do. But if they had no money on them and still wanted a poppy, take a poppy.

"Anybody's entitled to a poppy. If they haven't got a cent they'll still get a poppy."