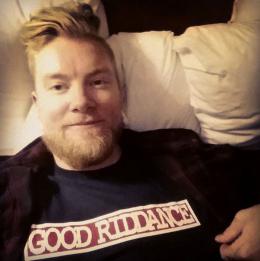 On June 22 punk rock motivational speaker Kevin Brooks enthusiastically tweeted out in all caps "NEW WHEELCHAIR HAS BEEN OFFICIALLY ORDERED!!"

It was, as a statement about wheelchairs goes, unremarkable. Brooks, who's paralyzed from the chest down after a drunk driving accident that killed his friend, says wheelchairs like the ones he uses have an average lifespan of around five years. Getting a new chair is a cyclical event. His was literally held together by duct tape in places, so his friend organized a crowdfunding campaign to get a new one. After all, he has given back in so many ways, since becoming a motivational speaker. It was time for someone to give back to him.

Brooks paralysis was his own fault. It came as the result of an alcohol-fueled dangerous driving incident in 2000 that also left the passenger in his car, his friend Brendon, dead. During the difficult phase where Brooks was learning to adapt to his post-crash life, he encountered Canadian Paralympian and philanthropist Rick Hansen, who challenged Brook to create an event for the Rick Hansen Foundation. He did. Raising nearly $10,000.

The event also propelled Brooks to start speaking about his crash and its aftermath for schools and organizations throughout North America. By Brooks' own estimation, he's brought his motivational drive to save lives message to half a million people across eight provinces and 24 states in the last 16 years.

Perhaps more importantly, all those years of frankly discussing the dangers associated with alcohol and driving, the difficulties he's faced with depression and suicidal thoughts, and the value of forgiveness, have found receptive ears.

When a friend recently noticed that Brooks' seven-year-old wheelchair was in a sorry state, she hastily arranged a GoFundMe campaign that earned $10,000 for a new wheelchair. The self-proclaimed "punk rock motivational speaker" had received a kindness from both friends and strangers.

Samaritanmag spoke to Brooks, now 37,  about his work in drunk driving and suicide prevention, as well as what it feels like to have so many strangers donating to help you out.

Can you explain how you ended up in a wheelchair?

I was partyin' with my buddy. We were doing what we did on a weekend night; we were drinkin’ and we left in my car. I was driving fast and just being dumb. I don’t remember the crash. I woke up in the hospital three weeks later hooked up to a ventilator, tied down to a bed, not able to move my body, unable to speak, an absolute mess. Tubes everywhere, in and out of consciousness through the medications I was on. Then I found out there was a car crash. I found out I had been paralyzed from the chest down, and found out worst of all, that my buddy Brendon had not survived the crash. It’s something I deal with every day.

One of the things that set you on the path you're on now was meeting (Canadian Paralympian and activist) Rick Hansen. He had suggested that you consider doing an event of some sort. What did you do?

I remember sitting outside of his office… I didn’t have a vehicle then. I was charged in the crash and lost my license — my friend’s family totally went to bat for me, which is another message of forgiveness that’s in my presentation because without their support and forgiveness I don’t know where I’d be — but, yeah, I’m sitting out there waiting for my mom to pick me up and I’m 22 years old, paralyzed recently, and I’m going, "I’m gonna do my first fundraiser." Then I went, "What the hell am I gonna do?"

I remembered I had been up at this lake with my mom and my youngest sister Hailey. Hailey was five when this went down, still a little kid, and Hailey was splashing around and I was stuck on the beach in my chair and it just broke my heart. I had never thought of that. I never thought of how it would affect my day-to-day with my little sister. I found my way into the lake. I talk about it in my presentation. I found a way to roll through the sand. It wasn’t easy, it wasn’t pretty, but I got in the lake. But I kinda felt this lake still had one up on me and that I wanted to come back one day and kick this lake’s ass. I made a vow. 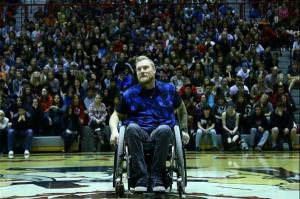 We didn’t know what the hell we were doing. But it was such an amazing feeling. It was through that fundraiser that Joel’s mom, an elementary school teacher, asked if I'd come to the school and talk to the kids about what we guys just did and we went in. Then there was another school. And another school... next thing you know I was speaking to my first high school and things started to roll.

What are the things you cover when you speak to kids in schools?

I cover so much. When I started speaking I was 22 so I was still pretty young. I went in there with skate shoes and a Metallica shirt and a mohawk and they’re like, "I’ll listen to this dude." They were like, "OK, he’s a peer. He’s on our level." So when I started, it was drinking and driving, speeding, dangerous driving, which was what we were doing that night. As time went on and I told the story more and more, there were things I didn’t even realize people were taking away from it. So I started to talk more, it became more of a motivational thing, which then led to suicide prevention in a big way because it wasn’t like I got hurt and I was all, "I’m gonna be great." There were some dark times and I thought about killing myself. And I’ve had some dark times between then and now too and I’ve overcome that so that inspires people, especially young people. I’ve done work with the army as well in the U.S. and populations that are very susceptible to suicide. And car crashes I believe across the board are the number one cause of preventable death in Canada and the U.S. and suicide’s number two. Both are choices people make so both are preventable, right?

There's a certain tough shell that lots of young people have. What does it take to get through to them?

How seriously do the kids take the message that you're trying to give them?

Am I 100 percent effective? I wish. I’ll tell you, I’ve had the kids from school reach out to me, or his family reach out to me and say, "Hey I really wish he would have listened to you because a guy drove drunk the other night and he crashed and his buddy died." I remember that. And that just breaks my heart because I want everyone to listen.

Honestly, does everybody get it? No, but a lot of people do and I get it; I can scope ‘em out. I wasn’t a goody-goody in school and that’s why I can get through to the badass kids because I was a little shit in school. I got kicked out of school; I was in and out of court; I was stealing my parents car. I was a nightmare in a lot of ways, so I’m coming from a place where I go into that really hardcore school, that alternate school where kids have it pretty rough and someone else may not get the respect, but I’ll get it because they’re like "Okay, he’s lived it; he knows it; he’s one of us." 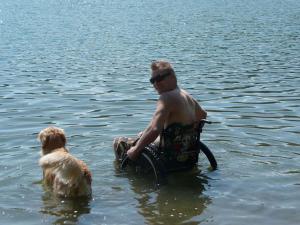 What's the condition of your current chair?

My current chair is seven years old. They say the average user’s life of a chair is four or five years. I’m not your average user. I live life to the fullest. I go everywhere. I got family, my grandma, my cousins, they have flights of stairs. My sister lives in Whistler; they’ve got concrete stairs. So this thing is getting banged up and down stairs. I like to have some fun, too, so it’s been to the skate park, done some crowd-surfs, been in some lakes. I live.

How will this new chair that has been crowdfunded for you improve your life?

I get around pretty good, but over the years my shoulders have taken a licking because they do everything and I’m in a manual chair. And this new thing is just going to open up my entire world because when there’s a hill I’ll be able to click the power assist and just roll up the hill without having to ask a stranger for a push, or struggling for an hour, or calling a taxi or you name it.When I’m traveling to a school or I’m at an airport and I’ve got bags up to my chin, rolling on carpet... It’s just going to make my life a lot easier. Just give me a lot more freedom.

The whole thing, it just blows my mind how cool everyone’s been and how everything came together. It’s so perfect.

After your accident and all the navigating of guilt and positive change you've had to work through, how does it feel today to know there are people that have seen your journey and are looking out for you?

I feel like so grateful. I truly feel like there’s energy in the world. And when we do good things and put out good energy they come back. I don’t expect anything. I didn’t expect a new chair. I feel it’s an example that there are really good people out there in the world and a ton of them just supported me. I donate a lot of my time and energy to other people and that attracts like-minded people. I’m the guy that donates to the GoFundMe that I see on Facebook that brings a tear to my eye or touches my heart and I really think it’s that energy and I think it’s a beautiful thing. It’s humbling. I can’t even wrap my head around it just how many people are looking out for me or who are know me or who’ve seen me or would be that person who’d help me out. I don’t even know how to put it into words.It’s a cool feeling. It’s a peaceful feeling. It’s a warm feeling. I love the world, I love people, I feel love.