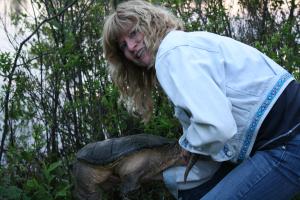 If turtles could talk, they’d be blabbing ears purple singing the praises of the one-of-a-kind Kawartha Turtle Trauma Centre (KTTC) which last year treated over 800 turtles hit by cars or suffering other shell-shattering calamities brought on by fishing hooks, dog bites, poaching and the like.

The registered charity treats, rehabilitates, and releases Ontario’s injured turtles and their hatchlings, performs extensive research to further conservation initiatives, and operates a comprehensive education and outreach program, all without a dime of government money.

Given that seven of Ontario’s eight indigenous turtle species are listed as being at risk — a sad scenario playing out all over the world — it’s impossible to overstate the importance of the work done daily by Dr. Sue Carstairs, KTTC executive and medical director since 2009, and the many other mostly volunteers working to save turtles now and in the future.

As the KTTC website soberly points out, “While other species of wildlife are also injured and killed on our roads, most animals have young from the previous year ready to mate and replenish the population. Unfortunately, this is not the case for turtles.

“Less than one percent of turtle eggs and hatchlings will survive to adulthood. This, combined with the fact that turtles can take anywhere from eight to 25 years to reach maturity, means that it can take 200 eggs and up to 25 years to replace one nesting female killed on the roadside. Every turtle saved is beneficial to the population.” 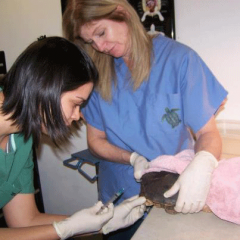 As the amiable Dr. Carstairs — who also works with the Toronto Wildlife Centre — explains to Samaritanmag, spreading that message helps explain why the number of injured turtles coming into the hospital has been steadily rising. Jane and John Doe now know that every effort should be made to assist turtles, and there is a species-specific place uniquely qualified to help them.

“We’re more visible,” Dr. Carstairs confirms. “Plus we also try and teach people other ways to combat decline: stewardship practices, how to watch for turtles on roads, how not to harvest them for food or take them as pets. So the hospital is just one component of our work. Because of that, we will gradually be changing our name to the Ontario Turtle Conservation Centre because it feels like we’ve outgrown our current name.”

She continues: “Our target audience is everybody, so we do outreach to children, veterinary schools, colleges and universities, cottagers, motorists, environmentalists, seniors groups… Our next fundraising venture is to get enough money to have a full-time educator. We get all kinds of requests and we think those programs make a huge difference, so now we just need the funds.”

Like most charities, the KTTC, which was founded in 2002, fundraises in a variety of ways: grant-writing and proposals to foundations, direct mail and call-outs to members, plus several annual fundraisers. “Basically private donations keep us afloat,” Dr. Carstairs says, adding that the KTTC currently has one full-time staffer, three part-timers and a small army of about 100 volunteers.

“We get grants but they tend to be project-oriented rather than helping with general operations. So fundraising is an ongoing thing,” she says. “And I am always coercing colleagues and friends to get involved. 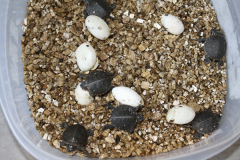 “There are other clinics we can rely on as first-response so if someone calls and our clinic is too far, we can send them to another, closer clinic and the turtle can get its initial care. We give those clinics plaques for their walls stating they help endangered turtles which boosts morale for staff and is good for business. So it’s win-win for everybody.”

Perhaps if people knew more about turtles — which are pretty darn amazing — they’d be more inclined to open their wallets.

To wit: The gender of many turtles, including all of the species found in the Kawarthas, is determined by incubation temperatures. A long hot summer means that more of the young turtles will develop as females.

Eggs from nesting females can be successfully harvested and incubated, with the hatchlings released back into the wild. In 2013 alone, the KTTC incubated some 1,300 eggs. “So even if the mother doesn’t make it, we can incubate, hatch and release the babies who can go and carry on her genes. 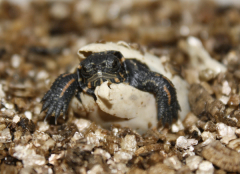 “And their physiology is amazing. They can hold their breath for an incredibly long time. They heal really well, probably better than any other species. They just do it very slowly.  But it is amazing what they can recover from. So cases where a dog or cat would die, turtles fly through.”

Good thing turtles are tough since, by Dr. Carstairs reckoning, they are probably the most endangered species on the planet right now.

“There are about 300 species worldwide and about half are threatened with extinction and they can’t be easily replaced in the population. The ones that are here need to stay here for a good long time. Losing even a few turtles tips the balance irreversibly.”

As its website notes, turtles are held at the KTTC until they are fully healed. Some turtles admitted early in the season can be released later in the same season. However, many require an overwinter stay. All the fixation devices are removed prior to release, and the turtles are released close to where they were rescued from. 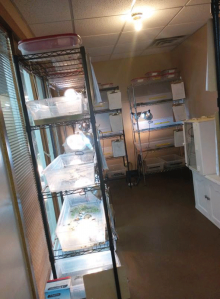 “We usually look for the nearest body of water, within one kilometer of their rescue site. This is best for the turtles, and this is also the law,” the website adds.

Not surprisingly, KTTC workers can get attached to their slow-moving reptilian patients. However, Dr. Carstairs allows that “We don’t name them because some of them don’t make it so we need to keep it a bit dispassionate even though we want every one of them to survive. And we don’t want people to think of them as pets.

“That’s another key part of our outreach: teaching people that if they do have a turtle as a pet — and it’s usually a red-eared slider — that it’s going to be a very long-term commitment. We work with centres that re-home unwanted pet turtles who encourage people not to release turtles into the wild.

“Red-eared sliders aren’t from here and they can disturb the natural population. A couple of our education turtles like Paddy were surrenders from people who bought them at a pet store and didn’t know they shouldn’t have these things as pets.

“The important thing for people to know is that everyone can make a difference. People say, ‘It’s hopeless, what can I do?’ The answer is: a lot. The number of turtles we are saving right now is making a difference to the overall turtle population.

“So every turtle you help across the road, every shoreline you keep clean, everyone you talk to about this really helps. And we can make a difference. But,” she laughs, “We could do even more if we had more funds.”