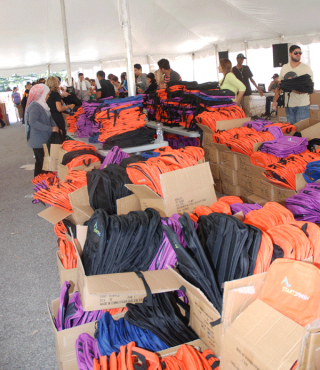 In addition to being "a leading provider of workplace products and solutions,” to borrow from its playbook, OfficeMax Grand & Toy takes corporate social responsibility seriously in ways you might not expect from a company whose fortunes are tied to corporate abundance — namely, via dogged environmental sustainability and the health and well-being of children in the community.

“At OfficeMax Grand & Toy,” reads a statement listed on its website under the Corporate Citizenship heading, “we believe that each and every person has a responsibility to do their part to better themselves, their communities and the natural environments that we all share.

“In line with this philosophy, OfficeMax Grand & Toy embraces social responsibility across every facet of our business, and we foster it through our connections with our associates, clients, partners and other stakeholders.”

“Lots of companies in Canada are doing good with respect to social responsibility. We just want to be as innovative as we can be in our approach,” Gaurav Sharma, OfficeMax Grand & Toy’s senior director of marketing, tells Samaritanmag.

“Look at our Boomerang Box program which is very innovative, and allows boxes to be used for delivery many times, not just once. This is the first of its kind in Canada.”

OfficeMax Grand & Toy’s myriad recycling and product sustainability programs are well documented in its annual CRS reports, but community activism, specifically through its involvement with the Start2Finish child fitness and literacy program, is where the company and its associates (as employees are called) really shine.

A national non-profit organization determined to break the cycle of child poverty by providing ongoing educational support to Canada’s at-risk children, Start2Finish is the kind of charity where results are measured in the successes of vulnerable kids coming from challenging environments.

Key to that is Start2Finish’s Backpack Program, which equips kids —  7,500 this year alone — with free backpacks stuffed with school supplies their families could not otherwise afford. OfficeMax Grand & Toy coordinates with its vendors and suppliers to source the notebooks, pens and other goodies stuffed into the backpacks while its employees help fill and distribute them to kids identified by their schools as needy and who receive them quietly to avoid stigmatization. 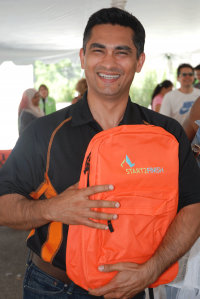 In each of the past two years (2012 and 2013), Sharma reckons OfficeMax Grand & Toy associates have contributed some 30,000 man-hours to the program. Most recently, the 7,500 backpacks were stuffed during events held in Toronto, Hamilton and Halifax. Those bring to 60,000 the total number of backpacks Start2Finish has provided to some 66,000 students since 2000, an effort valued at more than $7.5 million, according to Start2Finish.

“We haven’t really drilled down to a dollar figure of what this costs our organization; it’s more of a must-do thing for us,” Sharma says. “But our vendor partners (Crayola, 3M, Bic, Elmer and others) generously contribute the product so it’s not necessarily us paying for it every time.

“We give them a list of products we need and they donate it. Our costs come mainly from the man-hours needed to organize the backpack event, reaching out to the vendors, collecting the product, packing the backpacks.”

Speaking with Brian Warren, the effusive and supremely quotable American-born founder and executive director of Start2Finish — who also happens to be a two-time Grey Cup champion — it’s easy to understand OfficeMax Grand & Toy’s ongoing zeal about the now eight-year-old partnership with Start2Finish.

As Warren confirms to Samaritanmag, one of the challenges of operating a charity like Start2Finish is reminding would-be sponsors and volunteers that one million Canadian children live at or below the poverty line.

“I don’t believe it’s a matter of indifference so much as ignorance,” Warren says. “We live in such a great country that it’s hard to believe we still have children living in poverty. But our work has made a huge impact,” he says, noting Start2Finish’s after-school Running & Reading Clubs as well as its scholarship programs.

Warren continues: “With the Running & Reading Clubs, we work directly with the schools and they identify students they believe will benefit from the program. We might go to a school that’s in an impoverished area or what we would term a ‘community of complexity.’

“Maybe kids in that area don’t have the green spaces you’d hope for so motor skills are off, or they are living with just one parent so social skills are off. Many haven’t been able to enjoy team sports because of the cost. Kids coming to Running & Reading Clubs can belong to a team.

“Throughout our 32-week program, we see kids journaling about how far they ran or how much they read. In the first week, we see kids complaining that they felt dizzy because they ran for three minutes. Midway through the program they write, ‘Oh, I ran 15 minutes and it was really hard.’ By the end of the program they write that they’ve run for 25 minutes and feel awesome.

“A child’s greatest fear isn’t so much failure as humiliation,” Warren adds. “Nobody’s good at anything when they first start off but when we get them in these programs, they really bloom. In our experience, a fit child is also more receptive to learning.”

Kids who have gone through Start2Finish programs — offered from grade one through high school graduation — are expected to give back. Some return as coaches, helping with the backpack-stuffing initiative, which Sharma says allows volunteering OfficeMax Grand & Toy associates to see first-hand the sway their efforts are having. 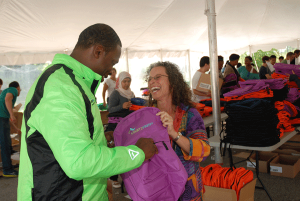 “Students tell their stories, about where they started and where they are now. That’s why it’s called Start2Finish,” Sharma says. “They are changing lives and shaping the future of our country. It’s just so essential.”

“An example is Edward Lule, a young man who worked in our program and who came out of a very difficult community,” Warren says. “He just signed a contract with the RCMP and he’s going to Regina to finish his training and they’re going to put him through law school. So one cycle has been broken but another has begun. We challenge every one of our students to give back.

“Someone like Edward has seen lots of gang violence in his community. And now he is on the other side of the fence. What we get in sweat equity is essential. Only nine percent of what we take in goes to administration. The rest goes directly to programming.”

As for the bearing of corporate sponsors like OfficeMax Grand & Toy, Warren confirms that money is only part of the equation. “The human capital cannot be overstated. It’s a new kind of ROI — not return on investment but a return on inclusion. When you calculate the man-hours these companies are giving alongside with money, their dollars are going way beyond what they thought possible through a multiplier effect.

“We are raising a human army of very socially conscious young people who are going to be our next workforce. We have the largest children’s run in the country,” he says referencing Run4Change, a national event hosted in partnership with Scotiabank that raises awareness of Start2Finish and the plight of child poverty across the nation.

Each year, Start2Finish spotlights Run4Change in a different Canadian city; in 2014, it’s Hamilton.

Warren continues: “Our kids have academic literacy, physical literacy, and social literacy — working on their minds, bodies and in their communities. This is an amazing generation. They’re not waiting for the world to change. They’re making that change happen now.”