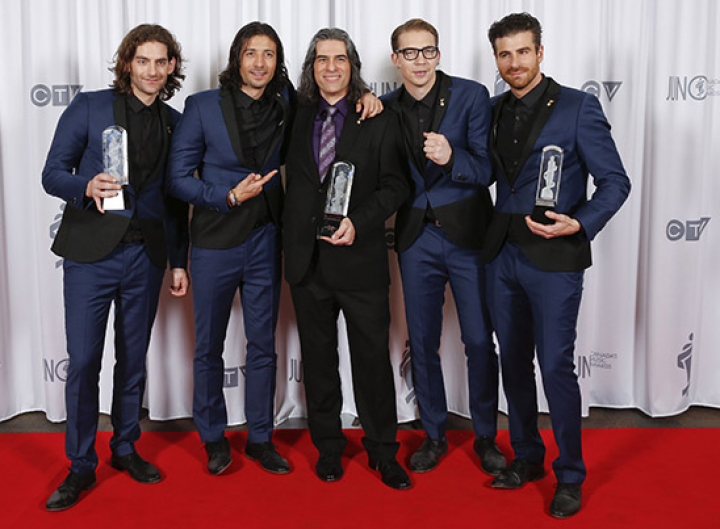 Magic! frontman Nasri Atweh knew his charity of choice would involve music, kids and the school system. He just didn’t know what it would be, he told Samaritanmag last May. His older brother is a school teacher and they would often talk about the benefit of music on young minds, improving their ability to focus. Then, in late August, when the band — Atweh, guitarist Mark Pellizzer, drummer Alex Tanas and bassist Ben Spivak — was opening for Hedley at Toronto’s Molson Amphitheatre, they saw Allan Reid, president/CEO of the Canadian Academy of Recording Arts & Sciences (CARAS) which puts on the Juno Awards and runs the music education charity MusiCounts.

Reid is the former senior vice-president of A&R at Universal Music Canada, where he not only signed Hedley but a young Nasri to a singles deal more than a decade ago, before the singer left for Los Angeles and began writing for such artists as New Kids On The Block, Justin Bieber, Pitbull, Chris Brown and Christina Aguilera — and, of course, long before Magic! even existed and had worldwide success with their reggae-pop single, “Rude,” from their Sony Music debut, Don’t Kill The Magic. Reid also knew Pellizzer and Tanas from Justin Nozuka’s old band, whose demos he funded.

Backstage, Reid and Sony Music Canada president Shane Carter were chatting with the band about the Junos. “They’re a big success and I’m sure they’ll be a nominee, ‘Make sure you come,’” Reid remembers saying to the band. “And then Shane said, ‘Allan also runs MusiCounts. What they do is they give instruments to needy kids. Last year they gave out a million dollars worth of grants and scholarships.’ 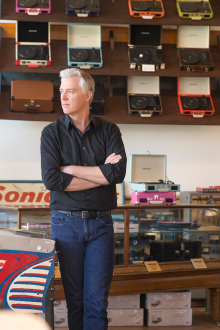 “And all four of the guys went, ‘You do what?’ And I said, ‘We give out instruments to these kids and, to date, almost 8 million dollars worth. And they were all like, ‘That’s so unreal.’ They all got it.  So Shane said, ‘The guys really loved the conversation; they would love to help MusiCounts at some point.’ I thought, ‘That’s great; they can come out to a Band Aid [school] presentation.’ ‘No, I really think they want to make a contribution.’”

Man, did they ever.

In December, just a few days before Christmas, Reid received an email from Atweh indicating that Magic! would like to get a cheque to MusiCounts before the end of the year. “Do you mind telling me the amount of the contribution?” Reid asked. “I thought it was going to be like $5,000, $10,000, what people will often give us because that’s our Band Aid grant number, and he emails me back with $100,000. I thought, ‘Is this a typo?’”

It wasn’t. Magic! wanted to not only sponsor this year’s Teacher of the Year Award (Steve Sainas at Terry Fox Secondary School in Port Coquitlam, BC, see companion story here) which comes with $10,000 in musical instruments for the teacher’s school and $10,000 for the teacher personally. The remaining funds, after sponsoring this award, would go to the Band Aid Program to provide musical instruments in more schools across Canada.

“They’ve done a great job in developing a great program,” says Atweh. “But these programs are everything. If the new artists that have influence don’t get involved then they’re going to die, because we have the eyes and ears of the people right now. So we want to make sure that this opportunity isn’t just to promote our music, but to bring some awareness to something very important to me.

“I know that I didn’t have the best music program in high school, but we had a music program, and it was my favourite time,” he says name-checking his music teacher Irene Walsh at Senator O’Connor College School. “That’s when all of the bonds of friendship were made with people that generally wouldn’t be your friend, you know? But then when they hear you do what you do best, they see that all of your quirkiness is because you have talent. So you develop not just talent, but you develop friendship. You develop great learning patterns.

“Because music in itself is very difficult to learn, but at the same time you have to be repetitive and you have to have discipline. There’s no other real life subject where you can have as much fun besides gym class like you can in music. So this is the opportunity to continue the pattern of learning being fun. And for every young musician out there and for people who don’t know they’re good musicians, this is the type of program that can promote that. And it can also help some teachers get jobs, which is important to help people who have to feed their family.” 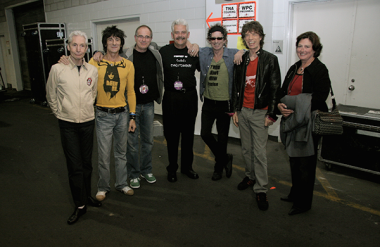 The driver for the inaugural Teacher of the Year Award came from music producer Bob Ezrin (Pink Floyd, Alice Cooper) a decade ago. He went to his good friend, concert promoter Michael Cohl, to ask the Rolling Stones to sponsor and present it. The recipient was Norm McIntosh from Confederation Secondary School in Sudbury, Ont.

“That was huge,” says Ezrin. “And I think it was the kind of powerful launch the award needed in order to attract support in the ensuing years.”  He was right. To date, other sponsors have been Michael Bublé, Celine Dion, Ann Murray, The Tragically Hip, Shania Twain, Johnny Reed, Billy Talent and Gord Bamford.

“I have always felt that teachers are the true heroes of society,” says Ezrin, who has a daughter who teaches 4th grade. “We award celebrity and achievement in sports, sciences, the arts, politics and business.  But we rarely recognize the people whose influence on all of us as we grow is the most profound and formative; the people who connect us with our talents and abilities and who spend more time with us in our lives than anyone aside from our parents: our teachers.  Honestly I wish there was a prize for every subject and the teachers who exemplify the dedication, sacrifice and emotional investment of all of their colleagues.

“But I’m in music and a member of MusiCounts which is unique in its ability to influence and inspire because of its connection to the music industry and the Juno Awards.  So I saw this as a platform for shining a light on all the music teachers in Canada and their devotion to and impact on the lives of their students.  So I lobbied for us to do this as part of our new push to expand and amplify MusiCounts (known then as MusiCan).  The advisory board agreed and I set out find the money and the ‘pizzazz’ for the first award.”

The staff and board of directors of MusiCounts know the dedication of the teachers across the country. They see it in the applications each year for the Band Aid Program, as well as from the applicants from the community programs that come in for help from the newly implemented TD Community Music Grants which aids music organizations outside the school system that have a ripple effect in the community. That program was initiated by Kevin Drew of Broken Social Scene. Reid says he remains dedicated and actively involved.

In its third year, TD Community Music Program has already provided $440,000 worth of instrument and equipment to support 31 community-based organizations across Canada. This year, it will be another $220,000. “The heroes of all of this are the people who are running those programs,” says Reid. “They are incredible human beings.”

Alan Convery, TD Bank Group’s director of community relations, agrees. “I have visited a couple of the communities,” he says. “For example the one in Toronto, Sketch, is for street-involved, homeless and at-risk youth. We’ve worked with them for years on the banking side actually, so when they received new equipment through our grant I was really happy for them to be able to continue expanding their programming. They do a great job at helping young people build on their artistic and musical entrepreneurial skills. 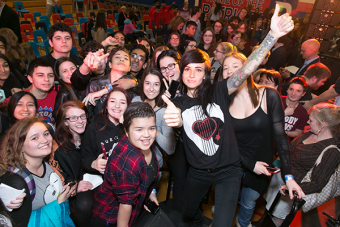 “In Winnipeg, I visited Status4, which provides free musical instruction for a number of at-risk youth, many of them Aboriginal. It was started and is still run by a Winnipeg police officer [Kevin Gibson]. He established a community centre in a rough neighbourhood downtown. Local youth get opportunities they never had before, like learning music and using it as a tool for social change.”

“It’s making an incredible difference,” adds Reid. “The TD Community Music Program has been such an eye opener for even us at MusiCounts. These organizations are using the power of music to transform a community. That’s the goal of the program.”

As for the long-running Band Aid Program, this year MusiCounts will be awarding nearly $600,000 in instruments and equipment, impacting 69 schools. This would not be possible without long-term financial supporters Bell Media, SiriusXM Canada, Vista Radio, and Music Canada. In addition, the Slaight Family Foundation has been particularly instrumental in supporting music education in Toronto schools. Over the past five years they have funded 30 of Toronto’s neediest public schools with $10,000 worth of instruments each. This has left a musical legacy in each school, where the instruments will last up to 20 years, benefitting several generations of children.

"I love the work MusiCounts does,” says Lights, who recently had her own frozen yogurt flavour at Menchies with the proceeds going to the charity. “Not long ago I visited Alpha Secondary School in Burnaby [BC] and played a few songs on some of the equipment they were receiving from the program. It's so important for kids to have access to musical equipment.”

* a version of this story appeared in the Juno Awards 2015 souvenir program.