Musician and Activist Jon Langford: Find A Cause That's Not Being Addressed 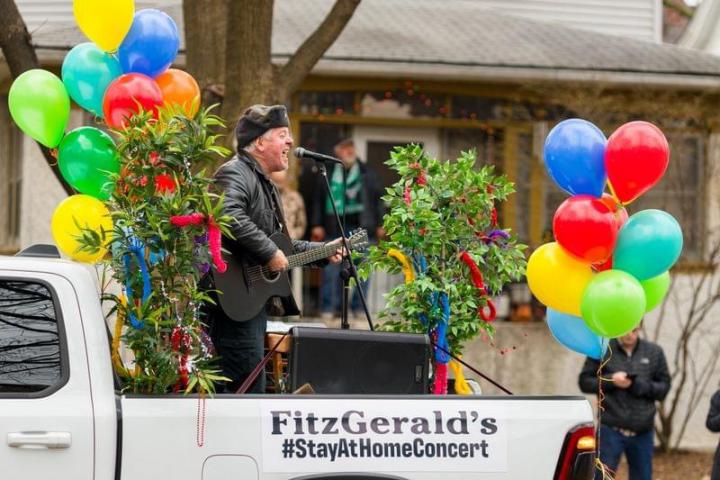 Singer, songwriter, musician and visual artist Jon Langford has been supporting worthwhile causes since he was studying painting at the University of Leeds and co-founded a punk band in 1977.

“The first Mekons gig was a benefit for striking firemen,” Langford told Samaritanmag over the phone from his home in Chicago, where he hit the streets for a demonstration against racism and police violence. “And then it went on to the miners, anti-death penalty stuff, and an album to raise money for an AIDS charity in the late ‘80s, which I thought was a really good thing to do at the time because that was when all of the right-wingers just called it a gay plague.”

In addition to fundraising concerts, some of those causes Langford mentions also benefitted by recordings that shared money and spread awareness.

Both The Mekons and another Langford group, left-leaning post-punk outfit The Three Johns, contributed to They Shall Not Pass. The 1985 compilation from CNT Records, which Langford was involved in founding, was compiled during the 10th month of the bitter British miners’ strike and dedicated to striking miners and their families. 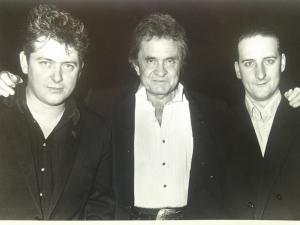 Langford and former The Fall member (and now longtime BBC Radio personality) Marc Riley put together a 1988 compilation titled ‘Til Things Are Brighter … A Tribute To Johnny Cash. The album of songs made famous by “The Man In Black” featured contributions from the likes of The Mekons, Michelle Shocked, The Buzzcocks’ Pete Shelley, Microdisney and Fatima Mansions’ Cathal Coughlan, Gaye Bykers On Acid’s Mary Mary and Soft Cell’s Marc Almond.

The compilation raised money for the Terrence Higgins Trust, the United Kingdom’s leading HIV and sexual health charity that provides a variety of services, runs community projects and campaigns on issues.

“We felt that it was really important to stick your head up and say something,” says Langford. “Cash was great because he really got behind it.”

Langford was behind the three-volume The Executioner’s Songs series of albums by the Pine Valley Cosmonauts, a collection of musicians who came together to play darkly themed roots music to benefit charitable organizations working to end the death penalty early in this century.

“People should try and find a cause that’s not being addressed and raise money for people,” says Langford. “Instead of expressing vague, political, abstract notions, you should identify something that’s needed and put some money into it.

"That’s what I’ve normally done when I’ve done benefit records and concerts. I put money in the hands of those who need it.”

Langford’s fund and consciousness-raising efforts this spring and summer primarily involved live-streaming performances and online video projects since COVID-19 lockdowns have taken away opportunities to tour with any of his musical projects, including The Waco Brothers, The Mekons, Skull Orchard and Four Lost Souls.

“I kind of hate the tip jar thing as a model,” says Langford of the way most musicians solicit money for their online performances. “Some people have been very, very generous and other people don’t send anything, which is the way of the world.

“Maybe there’s another way of doing it. Sometimes I just turn the phone on and I sing a few songs and don’t tell anyone I’m doing it and don’t have a tip jar. That feels like good karma because I’m a lot better off than people who’ve lost their livelihoods. I have a wife and two kids to support, but we’re actually scratching along.”

Langford wrote a short song and made a performance video to benefit Save the Dunes after the organization’s annual fundraising concert was cancelled due to COVID-19. Save the Dunes was established in 1952 to help preserve, protect and restore Indiana dunes and natural resources in northwest Indiana’s Lake Michigan watershed.

The 62-year-old has done fundraising live streams to support two of his favourite Chicago bars and their staffs, the Hideout Inn and FitzGerald’s Nightclub, after they were ordered to close in an effort to try and curtail the spread of COVID-19. For an April 4 FitzGerald’s show, Langford raised about $2,000 while riding around suburban Chicago in the back of a pick-up truck singing and playing guitar.

Langford did a May Day fundraising live stream for The Historical Society of Forest Park, from the Haymarket Martyr’s Monument in Chicago’s Forest Park, to promote workers’ solidarity. 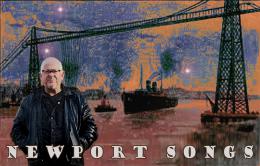 Langford was born and raised in Newport, Wales and, on May 29, he unveiled “Newport Songs.” It involved him performing some of his Wales-themed songs, with added old film clips and photos, art and commentary in between. The online creation was a benefit that contributed $600 to the community-owned Le Pub in Newport, in which Langford says he’s invested a large enough sum to claim a shelf large enough to accommodate three pints of beer.

Langford headlined a benefit concert that raised $1,400 for a GoFundMe campaign for Nick Tremulis, a friend and singer, songwriter and musician who had a bad case of COVID-19 and couldn’t afford to properly bury his son Stephanos after he passed away suddenly in August.

Langford Boyzbash, a new experimental group Langford formed with his sons James and Tommy while bunkered down at home, took part in a live stream in support of Windy City Indie, an organization supporting independent musicians during quarantine.

The “Our City of Neighbors” virtual concert also featured Jeff Tweedy, The Flat Five and several other Chicago acts. It raised more than $77,000 for:

·      Greater Chicago Food Depository, which works with a network of community-based programs to offer food and hope for anyone in need;

·      Chicago Lawyers’ Committee for Civil Rights, which works to advance racial equity and economic opportunity for all through partnerships with the private bar and grassroots community organizations;

·      and My Block My Hood My City, which helps teenagers overcome poverty and isolation through educational attainment and career development.

“The most fun I’ve had has been doing things with my sons,” says Langford. “We’ve formed a little band and we did something different that wasn’t trying to recreate something that already existed.

“Now I want to make something new with different rules, and turn the limitations into positives and make something crazy that wouldn’t have existed without this lockdown.”

Langford’s art degree from Leeds hasn’t gone to waste. He’s been able to earn money from his distinctive paintings, many of which are music-themed, over the years. His artwork has also appeared on album and book covers, in books, on beer and liquor bottle labels, on flasks, on T-shirts, in theatres, in a Country Music Hall of Fame and Museum exhibition, and in galleries.

The Yard Dog Gallery in Austin, Texas has been a big supporter and seller of Langford paintings, and it always drew large crowds when its backyard hosted the annual Bloodshot Records parties through the years during the South by Southwest Music Festival. The Waco Brothers have traditionally ended the events with raucous, tequila-fuelled sets that became the highlight of the week for some festival attendees. 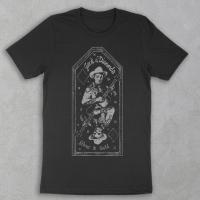 The Yard Dog’s landlord forced it to vacate its longtime South Congress Avenue location, and it moved to a different part of the Texas capital in December and then suffered another blow when South by Southwest was cancelled in March.

“I’ve been trying to do things with the Yard Dog to keep their profile up,” says Langford. “I started making bigger paintings and started putting stuff up online, so I’ve been really busy.”

Langford designed two t-shirts for Giveashi*t to raise funds for homeless people in Chicago — one titled Losers, the other Jack A Diamonds. Both sell for $25 USD.

In an effort to raise more funds during the COVID-19 lockdown, the Hideout minted “Hideout Bucks,” which were small screen prints designed by local Chicago artists, including Langford. They cost $25, $20 of which could be spent on drinks when the club reopens, and five dollars of which went to the artists.

“My local tavern has been my social security, which is great because all of the bloody liberal arts organizations that want to know every detail of your income to see if you’re really losing money didn’t come up with anything for me,” says Langford.

“It’s the grassroots, and people looking after themselves, that has been really impressive.”