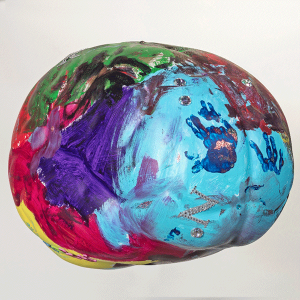 The streets of Toronto are going to experience a lot more brain power starting June 3 for a very good reason.

The Brain Project, a massive coordinated art initiative, will unveil 100 specially curated brain sculpture/art installations around Toronto streets all with the goal of raising money for Baycrest Health Sciences to fight against Alzheimer's, dementia and other age-related brain diseases.

Baycrest, which is a world leader in geriatric care, education and innovation, operates a combination geriatric residential living and research facility in Toronto "devoted to improving the quality of life of older adults everywhere."

Artists of different disciplines from around the world have been commissioned to create brains. Additionally, athletes, musicians, actors and other public figures like Kim Kardashian, Matthew Bellamy from the British rock band Muse, the Toronto Raptors basketball organization, and the cast of the television show Suits have made brain art as well. Michael Bublé and the Toronto Blue Jays baseball league are also "in talks" about contributing.

The brains, which can be found at mostly-downtown Toronto locations such as the Distillery District, St. Lawrence Market, Union Station, Steamwhistle Brewery and Nathan Phillips Square, will be on display throughout the summer. When fall hits, a number of the brains will be put up for auction with the proceeds going towards Baycrest. Organizers are hoping to raise at least $1.5 million from the initiative when everything's said and done.

Erica Godfrey, the co-chair of The Brain Project, spoke to Samaritanmag about how the idea came together, what they hope to accomplish and what some of her favourite brains are.

To help someone visualize this, is it like the Moose In The City project Toronto did in 2000 where artistically dressed up moose sculptures popped up all around the city?

Yes, it would be fair. Originally, when we started this project I said one of the the best things about it is that the moose were such a memorable project that no matter what anyone thought of them, everyone remembers them, which is so great because so many events you just go and you leave and you don't remember the cause. But everyone remembers the moose. So we've been talking about the moose a lot. It paved the way for us, but I'd say ours is a more curated art exhibit. They were a little bit more fun and light-hearted and ours are a little bit more serious art.

The funds raised from this will be going towards Baycrest Health Sciences. Why Baycrest?

It's not just the traditional hospital where they have patients and they help people. It's a geriatric hospital, as well as an assisted living centre for geriatric people, but it's also a huge research institute that's attached to the hospital and the building. It's one of the only places where the research is being done on actual patients who live on the premises. So that is very beneficial in terms of the research and innovation they do. It's really a centre for the aging and their focus is on brain health and age related diseases such as Alzheimer's, dementia, MS and other forms of brain diseases.

How does commissioning brain artwork and placing them on Toronto streets actually get converted to money to help fight these things?

To raise funds for what we're doing, there's going to be a 100 brains, 50 of them are being sponsored by companies and individuals ahead of time. Those ones being sponsored [amounts vary by company], you'll see their information on the plaque. That's a lot of the money we've been able to raise up front so that's great. Then the other 50 are being sold by auction online at the end of the summer. But there's also a portion of people who've already sponsored brains who'll be donating them back to the auction. So there might be more than 50 that will sold at the auction by the end.

My goal is to raise at least a minimum of $1.5 million. We're pretty much two-thirds there and we're doing pretty well because the auction won't be until the end. The best part of it is that can be the minimum, but the sky's the limit depending on how the auction goes, which will be online so the world will have access to it. So $1.5 [million] is our minimum.

Do you know what Baycrest will be spending the money on? Is there a specific research project this is earmarked for?

No. I'm on the board at Baycrest. I really understand the financial situation that they're in and the most important thing for us was to say to them, "We want you to take the money that's raised and put it towards the most high level things that are important to you." Some will go to research, some to care, but all of it will go towards Alzheimer's and dementia. I want it to be unrestricted so they can use it for whatever they need.

How big are the brains?

Each sculpture is about one-and-a-half by two feet and it's about five-and-a-half feet tall with the stand. But it's not like the moose, which were very large. You can almost wrap your hands around them if you hug it.

Have you seen all of them?

I've seen a bunch, probably more than anyone and they're all amazing. One will come in and everyone goes, "Oh my god, that one's even better than the last one." People are so talented and when you let them do what they want with their talent it's pretty amazing to see what they come up with. It's been amazing. 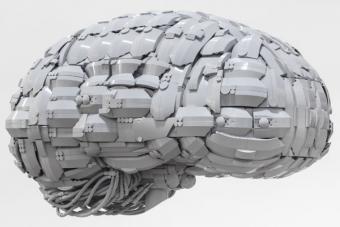 Do you have any favourites?

There's a bunch, but one of the ones everyone seems to love used broken tiny mirrors, so it's a mosaic that has jewels and mirrors and it's amazing. There's another woman who covered hers in seeds and it's going to grow all summer and that one's going to be at the Brickworks. The Brickworks generously offered to take care of it all summer. Another, Ekow Nimako, he's creating his out of Lego. All of his art is made of Lego and he basically built a brain out of Lego. One of the ones I love is by Parvez Taj. He's an artist from Toronto but he lives in L.A. and his is 3D printed. It's a web of the neurons in the brain. It's incredible. It's very architectural.

You also have some celebrity contributors. Whose art can we can expect to see?

We have the Blue Jays and the Raptors and we also have Kim Kardashian; she did a brain for us with her daughter North and when you see it you'll realize it has North's hand prints all over it. It's very cool. Michael Bublé is working on his brain right now. The cast of Suits. Matthew Bellamy from the band Muse created one. The interesting part to me is I really wanted the people involved to have been touched by Alzheimer's or dementia, that's kind of why we chose the people. So it's all by people who've been touched by this.

That's what we're really trying to shine a light on. That 100 per cent of people are affected by this and we all need to care about this.

Do you have a personal connection to this cause?

Yes, for sure. This project was actually my idea because I work with Baycrest. I care so much about it and see all the amazing things they do there and I really wanted to do something more innovative than the traditional fundraising. But my father-in-law Paul [Godfrey, CEO of Postmedia], his mother [Bess Godfrey] was at Baycrest for many years and suffered from Alzheimer's. I always thought she was one of the reasons why he became so successful in his life and to see her not be able to speak at the end of the her life — it just had so much impact on me to see what an amazing woman she was and then at the end of her life not be able to feed herself. So that's why we really felt we had to do something so that's how it started.

Are you hoping that this turns into a sort of summer scavenger hunt where people will be going around downtown Toronto this summer hunting for brains?

Totally, yeah. That's actually one of our goals. We have a map on our website and there's going to be the ability where if you're at one location, you're going to be able to open up and see if there's another one close by to you. Most of them are pretty close to each other, so if you do want to walk you can find them and it is a scavenger hunt. And one of the things we're doing throughout the summer is we're putting out all 100, but there's going to be a few new ones that are going to pop up for people and they're going to have to find them. And if they find them there'll be contests around them. Whoever takes the first picture or things like that. We're going to momentum going throughout the summer by adding new ones. I'm excited because I really believe that it's good for the people of our city. And I just think people are really going to like them.