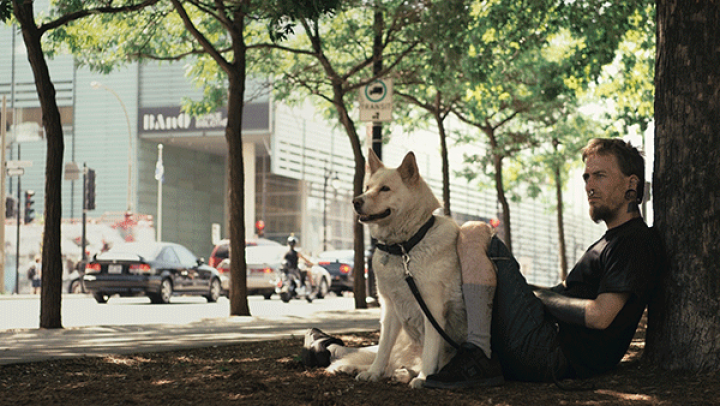 Of the hundreds of films screening at this year’s Hot Docs documentary film festival – happening in Toronto April 28 to May 8 – few will be as emotionally charged or potentially divisive as Quebec-based director Hélène Choquette’s A Dog’s Life, which follows homeless people who own dogs.

Emotionally charged because a nation of dog lovers will shudder to see pooches living in hostile and substandard conditions often alongside owners abusing illicit drugs. And potentially divisive because while rescuing the dogs might seem like a solution, Choquette’s film makes it clear that, in many cases, the animals are the only thing separating her human subjects from abject hopelessness and even death.

That’s also true of those who are not quite homeless but close, either stuck in the shelter system or otherwise vulnerably housed.

So does the welfare of the dogs surpass the welfare of their stewards? Are dogs the key to getting people off the streets? Why do many of us find it easier to sympathize (and maybe open the wallet) when the outstretched hand has a canine companion? And how does an ostensibly caring society feel about that?

These are the kinds of uncomfortable questions Choquette’s very non-judgmental film – made over the course of a year in Montreal and Toronto during every kind of awful weather – asks of its viewers.

Choquette is uniquely qualified to pose such weighty queries; previous award-winning documentary subjects include foreign caregivers (A Better Life, 2005), Chernobyl disaster victims (Children of Chernobyl, 2006) and Burmese boys exploited in a Thai boxing camp (Fists of Pride, 2012), among others.

Reached at her Montreal home ahead of her film’s trio of showings at Hot Docs (scroll down for dates and for the trailer), Choquette spoke with Samaritanmag about why a hands-across-the-water approach among activists might be the solution for dogs and people alike. 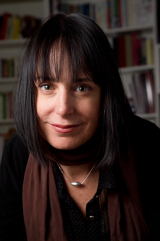 How did this subject get onto your radar?

In 2012 I wanted to do a documentary about homeless people focused on a downtown Montreal park, Place Émilie-Gamelin, named for a sister who helped street women in the 19th century. The sisters still help the homeless and most of them are quite old, so there was an urgency to tell this story. However, while I was working on that, I noticed a lot of homeless people with dogs. I thought this might be a good way to talk about the subject of homelessness from a different angle. People have so much sympathy for dogs – more than we have for homeless people, it seems. And that was troubling me. I asked myself why I seemed to care more for a homeless person with a dog. So I started digging to get the answers.

Homeless people with dogs do seem prevalent in major cities. Were you surprised this subject hadn’t been tackled before?

Yes. I discovered there was a big study about this topic undertaken in the United States but no film made. For me, the research period was six months and the shooting period one year because the change of season is something very dramatic in the life of homeless people in North America.

You mentioned your own sympathetic reaction to seeing homeless people with dogs. Why do think people feel that way?

Dogs are the most loved animals. People see homeless people as drug addicts or people with mental issues or just marginalized and they say, ‘Okay, this is just something we have to live with.’ They become part of the décor in city centres. Dogs seem to refocus that.

One subject in your film, Sophie, nightly delivers dog food and treats to homeless people. Is she an anomaly?

Yes and no. People will bring food to the dogs of homeless people. But they tend to judge and say to the homeless person, ‘Stop taking drugs.’ Because they bring food, they feel they have the right to say that. Sophie is the only person I met who didn’t do that. She listens to people, and can help sometimes – maybe bringing the dogs to the veterinarian – and she pushes her engagement beyond just giving food.

It’s very hard to build relationships with homeless people, like Steve and Jenny who live under the bridge. And when they get high every day at the end of the day, we couldn’t film them. They become very unpleasant, completely different people. 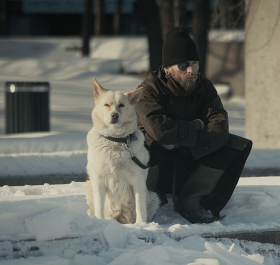 So what happens to the dogs when these people go on benders?

Ironically, having a dog is often the thing that holds people back from taking drugs excessively, even among addicts. They will stop before they get too high because they have to take care of their dog. The last they want is to lose their dog. But not always. When Steve started to do crystal meth and got too high, Sophie would sometimes take his dog, Popeye, to a shelter. Were it not for her, Steve wouldn’t have his dog anymore. The shelter people were often reluctant to release Popeye back to Steve because of his situation. But Sophie knew if Steve didn’t get him back, he wouldn’t make it. And while we were filming, Steve went to prison and Sophie took care of the dog.

Drugs aside, there is an established link between mental illness and homelessness. Was that something you witnessed?

Yes for sure. There just aren’t services for those people. But it’s not always that. Those two guys I filmed living together outside in tents with their dogs? They had both spent a very long time in prison and just weren’t able to cope with rules and structure. One thing is certain; once you are on the street for whatever reason, it is very hard to get off.

Did you come across any veterinary clinics or similar that specifically help the dogs of homeless people?

In Toronto, the Fred Victor Centre takes the homeless along with their dogs. But they don’t do anything specific for the dogs. In Montreal there is an interesting initiative called Dans la rue. And once a month they have a clinic for street people under 25 who can brings their dogs and have almost free services. I think it’s, like, $50 for sterilization but the vaccinations are free. They also ensure the young people are doing okay. In that clinic, they really take care of the animals.

What do you hope to achieve with your film?

It seems there are two kinds of people who would be interested in this film: people working with the homeless, and people working with dogs. I hope they come together and find a way to create shelters that would take care of both. Street people are very isolated, their friends don’t want to see them, and so the dog is the last thing they have. This is also true of other marginalized groups like old people living alone without family. When they have to go to hospital, who takes care of those pets? We have to think of some way of caring for the animals of fragile people, because we know those relationships are very important. Lifesaving even.

(Laughs). Yes of course. And honestly, sometimes, I wanted to take them home with me, to give them a break.

TRAILER for A DOG'S LIFE from AMG on Vimeo.