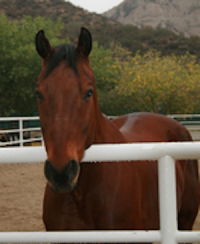 It might sound like a scene from the film "The Horse Whisperer," but what went down with a horse named Sir Lancelot at The Gentle Barn, a nonprofit organization that rescues farm animals and uses them to help disabled, special needs, and at-risk youth, in Santa Clarita, California is far from fiction.

Sir Lancelot, one of The Gentle Barn's 170 animals, was rescued from his abusers, who left him grossly underweight and nearly ridden to death, by the Los Angeles Police Department. Just before they were scheduled to euthanizing the horse, a police offer made a last-minute call to The Gentle Barn, who gladly took him in.

“The horse wasn't in great shape," Ellie Laks-Weiner, founder of The Gentle Barn, which began in 1999 in Tarzana, California, tells Samaritanmag. "After a year of giving him massage therapy, acupuncture, and all of this care and various therapies, he was still limping and we couldn't figure out why. We consulted with doctors and specialists and nothing was working."

"My first reaction was, 'Oh God, is this person crazy?' I had to make sure she was legit. I introduced to her to a few of our animals whose stories weren't on the website and were not well known, and she was able to tell me every single solitary thing about that animal - things she could not have known," she says.

So, Laks-Weiner asked Riester if she would "talk" to Sir Lancelot and find out why he's still limping. "She talked to him - and she is not a horse person. She didn't know anything about horses at all - and she 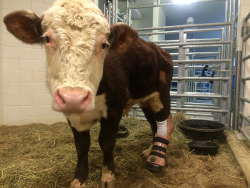 asked him why still limping. He said, 'Because my heel is too low on the ground it hurts. I need corrective shoes with wedges.' I thought, 'Holy crap. That's the one thing we haven't tried.' The next day we put the right shoes on him and he hasn't limped ever since. It was incredible."

Since 1999, The Gentle Barn has rescued thousands of animals, who come to them through a variety of ways, including the aforementioned Los Angeles Police Department and Animal Control in animal cruelty and hoarding cases, as well as through farm owners and ranchers who have a troubled animal that needs help. Such is the case with Dudley the Cow in Tennessee who had twine wrapped around his foot to the point of amputation. The Gentle Barn swooped in, found a bovine specialist, and is currently fitting the cow with a prosthetic foot.

Laks-Weiner's passion for animals began at a young age when she found her first best friend — an Australian Shepherd named Simon. With the woods and the lakes as her "playpen," she soon found herself bringing injured animals home much to the dismay of her parents. 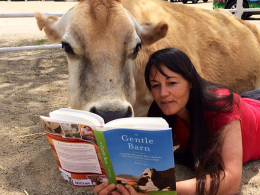 So, when the 7-year-old was at school, her parents would send the animals away. "I would get very upset when I came home to find my friends gone. So my temper tantrum to them at age 7 would be, 'You'll see! When I grow up I'll have a huge place full of animals and I'll show the world how beautiful they are.' I had this vision I would bring the lonely animals in the world to me and we'd heal each other, but then we'd bring all the lonely people in the world to us and we would heal each other. It was a very immature vision at age 7, but that's what I saw."

And, that's exactly what she did. As much as she's rescued these animals, they have rescued the people who come to visit as well. "One of the most amazing stories happened with a boy named Jack who is a quadriplegic," she says. "At school, they parked him in corner and at home parked him in front of the TV. It's hard, for some, to look at someone who can't talk or move and remember there is a human being in there.  It's the same how people look at animals, they think there is no intelligence in there, and of course there is. He came to The Gentle Barn with his special needs class and they just pushed Jack in the corner. I said, 'That's not happening on my watch."

Something told Laks-Weiner to bring one of their therapy horses, Sasha, who was hit by her former owner every time she made a mistake, to meet Jack. "I brought her over and tried talking to Jack, but his eyes were closed. He's so used to being in his own head that he doesn't even expect people to engage with him. Now I didn't train Sasha to do this, she just instinctively did it, but she reached out t him and started grooming Jack with her mouth. His eyes flew open and he zeroed in on her and she kept grooming him and he started smiling and laughing. He had so much fun."

Jack came to their special needs program for a year and every time he saw Sasha, he would just laugh and laugh and laugh. She brought him so much joy, but so much more as well," she says. "Jack had just a tiny bit of motion in his right hand when he first came to us. We used this interaction with Sasha using 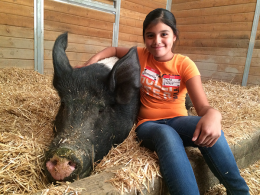 brushes, carrots, and a lead rope to help increase Jack's mobility and by the time he graduated our program, he had full mobility in his right arm. It was a miracle, really."

The gift kept on giving for Jack as the experience changed the way his classmates and teachers worked with him as well. "They really saw that there is a living, breathing, and intelligent being in there and they started interacting with him more, and his parents started having him at dinner table. His whole life blossomed. Sasha reached inside the boy, pulled him out and it changed his life completely."

"My dream is that every person in world has a chance to hug a cow, give a pig a tummy rub, cuddle with a turkey, and look in eyes of these animals that people think are so different than us and realize we are the same. I hope to have a Gentle Barn in every state and then worldwide," she adds.

The Gentle Barn, which as two locations in Santa Clarita, is open to the public on Sundays from 10 a.m. to 2 p.m. Animal lovers can support the organization in a variety of ways, including becoming a member, volunteering, sponsoring an animal, and purchasing the founder's new book, My Gentle Barn: Creating a Sanctuary Where Animals Heal and Children Learn to Hope.