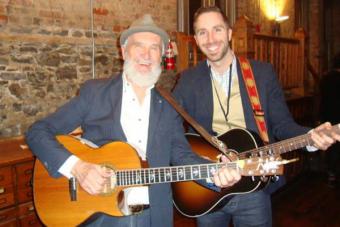 There's far more to beloved children's entertainer Fred Penner than just songs about sandwiches, cats who like to come back and signature entrances on stages through hollow logs.

Penner, a member of the Order of Canada who hosted the children's television show Fred Penner's Place between 1985 and 1997, has been using music throughout his 25-plus year career to do more than just entertain. He's been using it to improve the lives of others as well.

Last month he hosted a benefit for the Canadian Music Therapy Trust Fund. The grey-bearded singer is bullish on music's healing value.

"I've seen it," Penner, who holds a bachelor of arts degree in psychology and economics from the University of Winnipeg, told Samaritanmag of music therapy. "I've facilitated it in absolute clarity, and scientifically, physiologically. I have some understanding of the parts of the brain that are separate from other parts of the brain that the music sort of sits in. It is therapeutic, there's no question. It's worked deeply with autism where the child is really in their own world, their own path of understanding. Music just puts a framework to your life and your understanding. It becomes a template for your life."

Music therapy is far from the only cause Penner has lent a hand — and a song — to over the years. Samaritanmag spoke to him about some of his other efforts.

"I went to Zambia with my son. We went to a little village called Kalomo in Zambia about 12 years ago or so and sang with the children and talked to some of the mothers and grandmothers who were raising the children. There were very few men in the area where we were. HIV/AIDS had taken them, so that was a huge part of the process, to talk about what these families are going through. Ultimately that was about trying to encourage people in the western world to support World Vision and contribute to these communities. It was a very, very powerful thing. And singing with these children who didn't know English and who were so hungry to participate, I'd start singing a song and two seconds in they'd jump in and start finding phrases or parts of the song that they would imitate. It was a very powerful time."

"I had a sister who was a Down Syndrome child and music was a huge part of my interaction with her and understanding the value of music was very powerful through Suzie. I worked with special needs kids and behavioural problem children in the '70s at residential treatment centres in Winnipeg. Music was part of my communication there."

That was the centre that I worked in while I was going to university and after university. Knowles School For Boys was mainly for kids who came from broken homes and were really lost souls who had been told by their families they were worthless beings on this world and their self-image was completely shattered. Often they would not be able to function in the school system or the home environment so they would come to Knowles and we would attempt to give them some sort of stability. A bed to sleep in, food to eat, people to talk to, interactions.

"Children's Home of Winnipeg was a much more intense experience because it was with psychotic children, autistic children, children with very deep emotional disturbances and that gave me one of the most powerful images in my life of how the attitudes of family can really pervert a child's perspective. It was very, very intense work. I was a childcare worker, that was my title. Oh my goodness, it was a very, very hard time of life.

"I was just doing a show in old Alberta, playing a theatre, and there was a person who was signing sign language and she was signing the songs and there were half a dozen or so hearing impaired children who were in the audience. There's a couple sign language things I do in the course of a performance, simple phrases. I do this, I do that, say this is what it means, but I sign them. Apparently some of the children she was working with feel very self-conscious because they sign, because they're different than the other kids in the school. Then all of a sudden there's this guy who's the entertainment, he's the one on stage, he's the one that people are looking to, listening to, participating with. And he's signing. Well, that makes it alright. That puts it in a different perspective. All of a sudden the kids were into it, they came out of themselves. They were so much more engaged than they had been prior to that because it was now not something they had to be self-conscious about.

"When the teacher came to me and told me this she was crying. It was such a beautiful moment to see these kids come out of themselves at that moment. Things like, or with special needs children, or kids who are going through something in the hospital. I'll go to the cancer wards at hospitals just to communicate with the kids for a bit. Again, it's that moment, that opportunity to offer something to that human spirit that connects, that makes them feel, even for a short time, a little better about themselves."

Why Penner Does This

"I think of it often as a balance, the importance of balance to the general insanity we're going through in this world. It really is insane. Talking now I'm sitting here in a parking lot, I'm surrounded by signage and cars and apartment buildings and condos and we're blasted with stimuli. Every corner you turn you're blasted with information and someone telling you to buy these shoes, buy that coffee, buy this food... and you get desensitized to reality when you're in an environment like this. It becomes so incredibly intense you crawl into your own little corner and that's where you stay until you get to a place where you are comfortable: your work, your home, your favourite coffee shop or whatever.

"The importance of music to me is to open that little door and say, 'Here's something that you can gravitate towards that can create a balance towards that insanity that is a major part of your life.' Look at this music, bring these songs, whatever you have in your world that needs to be expressed, you can do it through the music. Music can make you feel emotionally secure for a length of time.

It can be brief or a much longer thing the more you connect or spend time with songs or a style of music or whatever. I believe in music because I've participated in it and this is my 44th year of performing. I've been on the road since 1972, and I've covered a lot of territory from coast to coast of this continent. And I receive regular support that says something I'm doing is making a difference in a life."