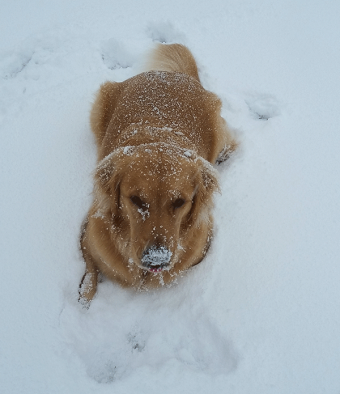 The same warnings that are made in the sweltering summer months to not leave pets — or children for that matter — in cars while you run in somewhere should be made in the freezing winter months. That five minutes could unexpectedly turn into 20 or more and could be lethal. “Solving” the problem by leaving the car running can actually increase the danger by agitating the pet and by the invisible risk of carbon monoxide poisoning.

As we did in the summer of 2013, Samaritanmag turned to American veterinarian Dr. Ernie Ward, who subjected himself to hot temperatures in a parked car to show how hot it gets (the YouTube video has more than 2 million views). He is a go-to media expert on pet care, a frequent guest on TV and radio shows in the U.S.

Dr. Ward tells Samaritanmag that “first and foremost” leaving a pet in a parked but running car in the winter with the windows closed can be as dangerous as doing so in summer.

“Remember that dogs and cats get colder quicker than humans,” despite the fact that, “dogs’ and cats’ body temperature is warmer than in humans.”

But it’s actually not the cold temperature that causes Dr. Ward the most concern; it’s leaving pets in running cars where the carbon monoxide can build up and quickly prove lethal. “Even just 15 minutes worth,” he warns. “The sad thing is that you can’t detect it – you’re not going to smell it – and it takes less time to for carbon monoxide to hurt a pet than a human in a running car.”

If one absolutely must leave a pet unattended in a vehicle, it is essential to crack open some windows to let the invisible poison gas escape. A better solution is to bring some warm blankets and/or pillows from the house to the car before you leave, so your pet can snuggle into them if necessary.

Most people, even pet owners, misunderstand the notion of “cold bloodedness.” According to the Ontario SPCA (Society for the Prevention of Cruelty to Animals), the typical body temperature for dogs and cats is around 102 degrees Fahrenheit. Dr. Ward says that, “by definition, when that body temperature gets below 99 or 100 degrees Fahrenheit that’s within a hypothermic state. If the temperature drops down in your car to 60 or even 70 degrees and you’ve got a little, shivering Chihuahua, it’s easy to drop that core body temperature down a couple of degrees.”

Mild hypothermia  — evident when pets start to shiver and they may not respond to their name — can be treated, though something should be done quickly. But if that core temperature drops to 82 degrees or lower, death or permanent damage to organs may occur.

“We tend to attribute our ability to compensate for cold weather with that of our dogs or cats,” Dr. Ward explains, “and it’s important to know that dogs are better at keeping themselves warm than cats. This is a by-product not only of their physiology, which is a little closer to humans, but also they have better fur.

“Most breeds have two layers of fur. They’ve got the under coat, or the downy coat, then of course they have their topcoat, which is the normal hair that you see. Whereas cats don’t usually have the under coat that dogs do; dogs are a little better at preserving body heat than cats.

“You may go outside all bundled up and you might think, ‘Oh, my dog has a fur coat on; he’s probably just as warm as me.’ And that’s not true at all.”

While bitter cold affects all dogs and cats, Dr. Ward points out that, “the impacts are going to be greater in those very young and those older with pre-existing conditions,” particularly arthritis and heart ailments.

“For example, with heat, the downstream impact from the heat event is going to be on the kidneys primarily. For cold, the kidneys can also be affected because these things called ‘cold agglutinins’ are activated which can also cause tiny blood clots to form that can impact the brain as well. Then, of course, there’s the classic damage that’s done to the extremities because of poorer blood flow.”

Dr. Ward warns: “When the temperatures dip below freezing, you need to be very, very careful. I was mentioning earlier that 82 degrees Fahrenheit is an important body temperature because when the body temperature of a dog or cat gets below 82 degrees they can no longer recover… This is why if a dog is left out overnight in freezing weather, without shelter or ways to somehow contain the heat, then they will die. Even with aggressive medical intervention we may not be able to save them.”

Letting a dog out in winter poses another problem for them, even when it’s not freezing. Unlike a cat who will seek out some form of shelter to find protection and warmth, dogs can wander off and get lost while a snowfall occurs, covering up the scents they’d normally use to find their way home.

In general, Dr. Ward recommends investing in dog gear: sweaters, coats or vests, and booties, “that can help keep that body heat in and, of course, keep the perils of cold out.”

Surprisingly, the most immediate threat to dogs left in a car is, “from the car itself,” according to Dr. Ward. Dogs are “notorious,” for accidentally engaging door locks (with the key in the ignition and the car running), leaving them in a potential death trap.

Waiting in the car as the temperature rises or drops to dangerous levels can cause the pet to become, “frantic and nervous and they [could] slap the car into drive.”

What Dr. Ward is most concerned about is, “people leaving the car with the heat running because it’s very common. Obviously, leaving a dog outside, I think, is not being a good pet owner. Especially in Canada, if you’re going to be a responsible pet owner you need to take into account that temperatures are going to be life threatening to your pet and how you can simply provide a safe environment for them.”