Cat Colony Caretakers are in Your Alleys Before You Awake 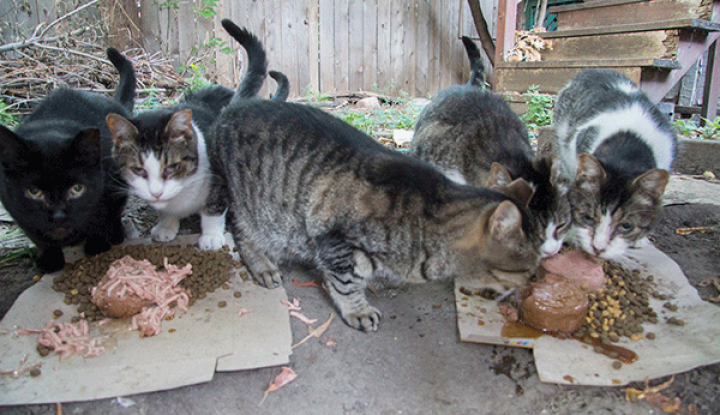 Every day in every corner of the continent, an army of cat-loving volunteers — some organized, some ad hoc and responding to strays that simply turn up in the backyard one day — set out bowls of water and plates of food in alleys, ravines, under bridges and on private property in an effort to strike at least one peril from the daily list of dangers common to homeless cats.

I am one of those volunteers.

No one really knows how big the homeless cat population is in North America. In a city like Toronto, estimates vary between 50,000 and 100,000, which many experts believe is a conservative guess even at the high end.

What is known for sure is that these gentle creatures, which should be companion animals living indoors and away from traffic, wildlife, harsh weather and the constant threat of starvation, are many in number and among the most vulnerable in our midst.

Like most people, I got involved with helping cats by accident. A story I had written about local animal heroes led me to Toronto’s Annex Cat Rescue, a completely volunteer organization dedicated to easing the plight of homeless cats through diligent, ongoing care and adoptions wherever possible. I was so impressed with the scope and effectiveness of the work they did that, after the piece ran, I volunteered to write for the ACR website and newsletter. 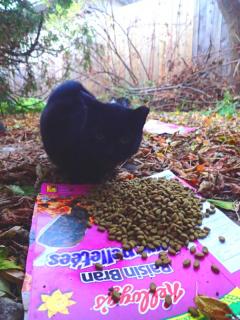 That put me in the email mix, which soon led to a plea for a new colony feeder in an area near where I practice yoga. I was accustomed to feeding animals that may or may not take ear-scratches; when I bought my house, I ‘inherited’ several homeless cats who’d been sleeping in a dilapidated shed on the property next door. When the neighbours moved, so did the cats — into my garden. Through attrition and god only knows what else, I was eventually left with one cat, Sunny. Ten years on, she still lives out back.

Feeding homeless cats in a colony is humbling, heart-breaking and rewarding in about equal measure. No one does it casually. It’s awful in winter and when it’s pouring rain, but the motivation is clear. And as bad as it is for feeders trying to pry the lids off of cat food cans with frozen fingers, it’s worse for the felines venturing into snow up to their bellies for a once-daily meal before the raccoons descend.

Mornings are best as raccoons tend to be less active at that time. In the Chester/Danforth area, the colony I feed, it's evening. We never reveal the exact location of colonies to outsiders because jackasses have been known to dump unwanted cats off.

At the colony near my yoga studio, four cats live in a backyard where special straw-filled shelters have been set up by a kindly home owner to keep them from freezing to death in winter. These shelters are also made by volunteers and distributed free or very cheaply to encourage tolerant property owners to use them.

Because the home owner doesn’t want us in the yard, we seven feeders — one for each day of the week — must kneel down and feed the cats through a hole in the fence. Wet and dry food is set out on cardboard plates (easier to clean up) and fresh water is added to empty yogurt containers trucked along for that purpose.

Without hesitation, two cats — Baby and Bandit — are first to the hole, popping their heads out to take pets and playfully swatting at our hands as we scoop out the food while their cagier comrades hang back.

It’s not known how these cats came to be living in this way; the back stories of all homeless cats are mysteries. Homeless cats that are comfortable with human touch are presumed to have once been owned but were lost or abandoned while feral cats — those born outside before volunteers could trap and spay/neuter their parents — will often never allow touch even after years of being fed by the same volunteers, day in and day out.

In addition to daily feeding, colony caretakers monitor for signs of physical illness and dental distress, with charities such as Annex Cat Rescue footing the vet bills when the cats are captured, which is much harder to do than it sounds. These are wary beings. Also smart, and not easily lured unless they are very hungry. (Protocol dictates we must stop feeding for a few days and yes, it rankles horribly).

Indeed, the above-mentioned colony used to have five cats but we caretakers noticed that Elmo had weepy and glued-shut eyes — a potential sign of upper respiratory infection which desperately needed veterinary care. An experienced volunteer trapper (miraculously) captured Elmo through the fence and took him to the vet. 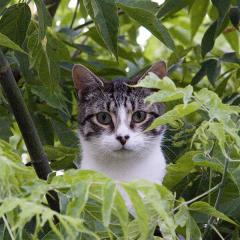 It’s unclear how much longer he would have lived outdoors. But Elmo, suffering from severe dehydration, feline AIDS (very common in ferals), anaemia and a horrific flea infestation in addition to the URI, went into cardiac arrest and died within days of being admitted to hospital.

There’s no telling how much he suffered before he died. When news of poor, gentle Elmo’s death spread among the caretakers, we wept. I am crying now as I type this.  Like I said, no one does this work casually. It very often hurts.

But we have successes, too. And we have all sorts of clever tricks to help give our homeless cats a better life even if it is spent outdoors.

We build the aforementioned — and remarkably effective — overwinter shelters out of simple Rubbermaid bins and straw and Styrofoam insulation. We purchase microwavable plastic discs called SnuggleSafes, meant to comfort arthritic animals but used by us to slow the freezing of drinking water in winter.

When our cats receive care in clinics, we sometimes discover they are receptive to handling and we’re able to transition them first into foster homes and then into forever homes.

Take Logan. The young black cat and her three kittens were spotted living under a Danforth-area porch by a good samaritan who reached out to ACR for help after canvassing the street and discovering that Logan had spent two of the coldest winters in Toronto history outdoors and alone, being fed whenever neighbours remembered.

ACR volunteers trapped the kittens and Logan who — as per our usual course of action — was spayed, vaccinated, treated for worms and fleas, and microchipped. The kittens quickly found forever homes. 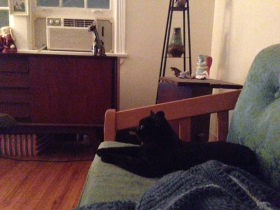 Our vet partner suggested that with patience, Logan might also be tame enough to be adopted. A foster caregiver stepped up to care for and socialize Logan who gradually revealed herself to be smart, sweet and entirely agreeable to life inside. A few months later, she was adopted.

Maybe Logan once belonged to someone and was lost. Maybe she was born outside but was preternaturally friendly. There’s no question that without multiple caring volunteers, her continued existence on the street would have been miserable.

Here’s something else we know about homeless cats. It’s a problem that has to end. People must start regarding cats as they do dogs — like members of the family, not property that is surrendered to shelters or (ugh) just turned loose if behavioural problems emerge or they simply become inconvenient. And cats must, absolutely must, be spayed and neutered even if owners never intend their cats to go outside… because sometimes they get lost anyway.

Volunteering to care for homeless cats is the best job in the world and the worst job in the world. It’s a job where success is most often measured by the calamities that didn’t happen. And occasionally, by soaring successes like that of Logan. And I know I speak for Annex Cat Rescue and all the other amazing cat rescue agencies when I say there is nothing we’d like more than to be put out of business once and for all.