Can You Spot Elder Abuse? 4 to 10 Percent of Seniors in Canada Are Abused 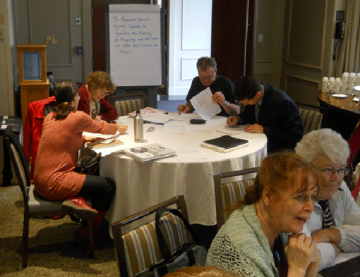 It may not grab headlines like schoolyard bullying but elder abuse is an equally insidious and pervasive problem. According to the Government of Canada on its website, it has been estimated that between 4 and 10 percent of seniors in Canada experience some form of elder abuse and that only 1 in 5 cases of abuse is reported.

In 2011, a Toronto man and his wife were charged with elder abuse after forcing his 68-year-old mother to live in the garage. “Police found her unconscious, freezing and starving in a makeshift bedroom set up inside a non-insulated garage,” a CTV news report says. That same year, in Vancouver, the courts quashed a “caregiver’s” claims to assets of a wealthy 76-year-old man deemed incompetent, whom she married and tried to milk for millions, while she kept him in one-room squalor, according to the Vancouver Sun.

Unfortunately, these type of situations are taking place across the country and around the world.

The deeply unsettling statistics are not news to Raeann Rideout and Pat Power, co-chairs of the long-running Canadian Network for the Prevention of Elder Abuse (CNPEA), a national non-profit organization dedicated to the prevention of elder abuse in Canada and provide information for the public to help, if they suspect an elderly person is being abused or taken advantage of.

Though somewhat dated, the government’s data on seniors in Canada is accurate, Power and Rideout agree, adding that the most common scenario for abuse is within domestic (versus institutional) situations. They should know — both work the frontlines every day.

Power is also a community development social worker with the Edmonton Elder Abuse Intervention Team, while Rideout is a regional elder abuse consultant (central east Ontario) with the Ontario Network for the Prevention of Elder Abuse.

“What we see is dysfunction happening over the years,” Power tells Samaritanmag, via conference call from Alberta. “Family issues such as addictions, mental illness that hasn’t been treated, those factors come into play. And some of those factors may have been in play for the last 20, 30, 40 years. Those kinds of issues can make a family very vulnerable.”

“But I wouldn’t put age as a vulnerability,” Rideout adds, during that same conference call with Samaritanmag. “Being old isn’t necessarily a risk factor for abuse. It’s more about family dynamics. And there are some other factors: isolation, rural communities with lack of family or interaction with others.”

“And it’s not necessarily the older person who is the dependant in this dynamic,” Power says. “The older person could be independent, but an adult is taking advantage of them,” a scenario depressingly familiar to Power and Rideout who confirm they’ve seen gambling and substance abuse problems lead to theft and other financial skulduggery within families.

Says Rideout: “Sometimes the dependency issue is flipped around: the older adult is quite capable but a family member — son, daughter granddaughter — is in this state where they’ve lost a job or divorced or ended up in this predicament where they have moved back in with their grandmother or parent.

“Sometimes that becomes a co-dependency situation where the older person just might need some help getting around to grocery shop or doctor’s appointments. Sometimes it works out really well for families and sometimes it goes the other way around.”

“Commonly recognized types of elder abuse include physical, psychological and financial. Often, more than one type of abuse occurs at the same time. Abuse can be a single incident or a repeated pattern of behaviour. Financial abuse is the most commonly reported type of elder abuse.”

That fits with what both Power and Rideout have seen among seniors in Canada. But there are other reasons why the elderly might be abused and, sadly, as many reasons why they would choose not to report it. Information provided by the Government of Canada on its website, though comprehensive, makes for grim reading.

“Elder abuse often occurs because of the abuser's power and control over an older person. In some situations, the abuse may also result from addiction issues, mental health problems, a cycle of family violence or ageism. Abuse can happen when the aggressor wants to intimidate, isolate, dominate or control another person.

“Abuse can happen to anyone, in any family or relationship. It can happen to people of all backgrounds, ages, religions, races, cultures and ethnic origins. Older adults may feel ashamed or embarrassed to tell anyone they are being abused by someone they trust.

“They may fear retaliation or punishment, or they may have concerns about having to move from their home or community. They may also feel a sense of family loyalty. Often, older adults may not be aware of people and resources that can help.”

This last point doubtless speaks to the internet. Though the Government of Canada and organizations such as the CNPEA offer reams of information for seniors on their respective websites, it is at least an empirical fact that those for whom the web came late seem most disinclined to access it.

Power, Rideout and government sites agree that spotting the signs of elderly abuse can be tricky, but there are some red flags. “Maybe an adult child is going through a transition, has moved back in and seems to be kind of taking over within the family situation,” Power says.

“Maybe the neighbours aren’t seeing that senior as often as they used to and when they do see them, they seem to be down or depressed. Maybe the adult child has taken over control of the car and the senior doesn’t seem to have the same freedom to come and go as they had before.”

Adds Rideout: “It could be a situation where the bills are starting to pile up or the senior doesn’t have appropriate clothing; they haven’t been shopping in a while or maybe there isn’t enough food in the home because someone else is now the power of attorney and taking the money to do things for themselves, which is illegal.

“We hear a lot about misuse of power of attorney, especially when someone has dementia. Also signs of neglect – have living conditions changed and are they unsanitary? Is there yelling and screaming?  Is there bruising?”

The Government of Canada is unequivocal in its stand against elder abuse. In January 2013, the Protecting Canada’s Seniors Act was adopted, ensuring stronger penalties for offences involving the abuse of elderly people. Through Economic Action Plan 2013, the Government proposes to better safeguard the well-being of seniors in a variety of areas, including financial services, financial literacy and health.

Last June, the Canadian government through Alice Wong, Minister of State (Seniors), issued a statement recognizing World Elder Abuse Awareness Day which read in part, “Since 2006, June 15th has been recognized as World Elder Abuse Awareness Day, focusing attention on the abuse and neglect that some older adults experience and how it can be prevented.

"Our government is committed to standing up for victims of elder abuse. We are pleased to recognize and support the work being done to raise awareness of elder abuse and help seniors better protect themselves from its many forms.”

Yet both Rideout and Power agree that spotting — and then responding to or reporting — suspected elder abuse can be fraught for would-be interventionists.

“There may be times where the older adult is quite aware of what’s happening, but they choose not to take action,” Rideout says. “And that’s an individual’s right of autonomy. We have to respect that. Sometimes police showing up at the door is not the best scenario. Plus it depends on the jurisdiction where you live; provinces with mandatory reporting versus not.”

“It really does depend on the region,” Power says. “Here in Edmonton, for example, we have an intake line where people can phone with their concerns and sort out the best course of action from there. Calls may go to our elder abuse team to do investigation, or it may go to Edmonton Police Service. The main thing is: someone in authority needs to know that something is going on.”

Adds Rideout: “There is a campaign we’re involved with called ‘It’s Not Right’ where we are trying to engage neighbours, friends and families to start speaking out around this issue and to start a conversation. Some people don’t want to get involved so we encourage them to call Crime Stoppers or to call their local police if they are worried about individuals.

“If someone has a relationship with a suspected abuse victim, they should try to have a conversation just to see how they’re doing. Maybe they are socially isolated but no one has ever asked them about it before.”

As we live longer — and increasingly alone, as sociologist Eric Klinenberg notes in his excellent book on the subject, Going Solo: The Extraordinary Rise and Surprising Appeal of Living Alone — we are all potentially more vulnerable to abuses. But it doesn’t have to be, insists both Rideout and Power who, between them, have nearly two decades with the Canadian Network for the Prevention of Elder Abuse behind them.

“Our vision is to have a society free of elder abuse,” Power says, “and it’s very, very challenging to even get to a point where we limit or reduce it. But that’s the work.”

Adds Rideout, “Ageism — where we discriminate against people or put a label on them because they are 65 or 70 and assumed to no longer be capable of making decisions — is a problem. Or maybe someone has been diagnosed with some kind of dementia or cognitive disorder.

“It may be very early stages but because you have the beginning of that illness, people assume you’re not capable of making decisions and they start taking control away. So there is that lack of respect. But there is a lot of promotion across Canada — around the world really — around combating ageism.

“We need to treat our elders the same way we treat everyone else. Just because someone has grey hair or physical frailty doesn’t mean they shouldn’t be revered like everyone else.”