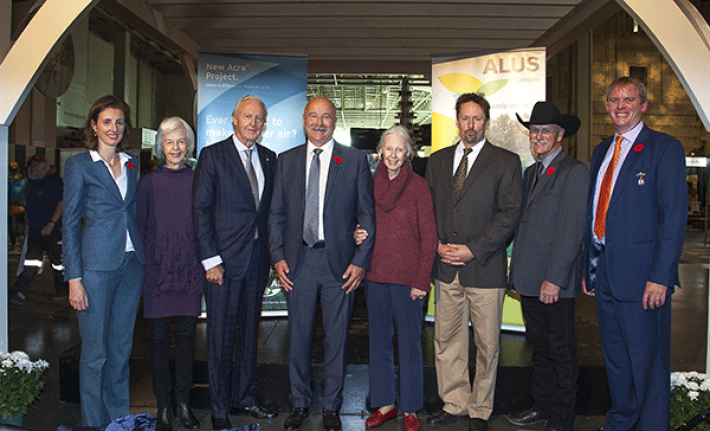 The W. Garfield Weston Foundation has donated $5 million to the farmer-driven, environmentally-friendly ALUS Canada and transformed the organization into a Weston Family Initiative.

The donation will help ALUS Canada, an organization devoted to offsetting environmental footprints through agricultural stewardship, expand their national program across the country and help finance their ambitious New Acre Project, which incentivizes farmers and ranchers to convert their acreage into more environmentally-friendly practices of producing cleaner air, cleaner water and creating and preserving wildlife habitats.

Making the announcement at the Royal Agricultural Winter Fair at the Exhibition grounds in Toronto earlier this month, Tamara Rebanks, chair of the Foundation's conservation committee — which has funded more than $100 million in Canadian conservation initiatives over the years — said her mother Wendy first discovered ALUS Canada 15 years ago, and that the ensuing relationship and growth between the two organizations was organic.

"We believe strongly in the ALUS model, which is farmer-delivered and community-developed, to create tens of thousands of acres of diverse habitats and wetlands," said Rebanks during the press conference. "These farmlands offer carbon sequestration and climate change mitigation and are incredibly valuable to our environment and our future."

Newly minted ALUS Canada CEO Bryan Gilvesy said the Weston Foundation investment has allowed his organization to expand to six provinces, including a launch in Québec this past summer, and predicts that future plans to open in Nova Scotia and several more communities in Ontario and Alberta will increase the current 18,200 acres devoted to producing ecosystem services to 25,000 acres by the end of 2017.

The ALUS Canada national program that supports ranchers and farmers who produce clean air, clean water, pollinator habitats and other ecosystem services and systems of sustainability. 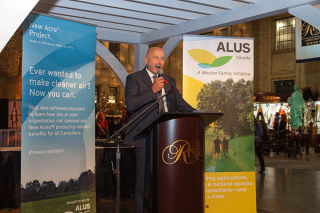 Gilvesy also announced onstage the launch of ALUS innovative The New Acre Project, which will allow individuals and organizations that contribute to the ALUS program to obtain quantifiable environmental outcomes in return.

"It's the first of its kind in North America," said Gilvesy of the new donation scheme.

The Weston Family Ecosystem Innovation Award went to Dr. Andrew MacDougall, a University of Guelph professor, who conducts innovative research in the fields of pollinators and biodiversity while using southwestern Ontario swaths of tallgrass prairie as his lab, as established by ALUS Norfolk.

Dr. MacDougall, who measures ecosystem services on behalf of farmers as part of his research, told Samaritanmag he's seen positive firsthand results of their conservation efforts, especially when it comes to bees returning to restored habitats.

"They come back almost instantly," said Dr. MacDougall. "I've worked on three ALUS farms. These are conventional farms with insecticides and the whole bit, where they've put somewhere between 5% and 10% of their marginal lands into this pollinator habitat.

"And we've seen double pollinator adversity, doubling of species, and tripling of pollinator biomass, a number of individuals all in these little areas, and they immediately are flying into the fields for pumpkins, squash or apples and replacing the need for hives.  For me it was a powerful and surprising effect to see that, so yeah, it seems to work."

The second $10,000 prize, The ALUS Canada Producer Award, was presented to Gerry Taillieu, manager of the 14,000-acres ranch west of Edmonton, Alberta for his commitment to land stewardship, producing ecological services through the ALUS program.

One of the initiatives Taillieu implemented on his ranch was the fencing off of a half-mile of land to prevent cattle from "watering in the creek, standing in their own water, where they defecate, urinate, fowl the water, and create all sorts of microorganism problems and disease."

Since the land Taillieu manages drains into the North Saskatchewan River just west of Edmonton, he said the ranch is affecting the water supply in Edmonton and other communities. By offering his cattle cleaner water, the response from the animals themselves is rewarding, as they're gaining weight.

"We can see the difference in cattle health," he noted.

ALUS Canada CEO Bryan Gilvesy, a farmer himself, told the media his organization is unique on a number of fronts.

"ALUS Canada is distinct because it's able to leverage the talent and the skills of farmers across the land for conservation," he explained. "ALUS is different because we seek the engagement of our communities and farmers to manage or maintain ecosystem services they have created. ALUS breaks new ground because our project sites always add to Canada's start-up natural capital.  And we are taking the environmental value created on our farm sites, and developing markets for them."

The next step is the New Acre Project, in which Gilvesy said will allow individuals and organizations to contribute to environmental improvement and fund new acres for conservation and encourage biodiversity.

"The Canadian business world is slowly moving to a place where they're reporting on what's known as the corporate social responsibility index," Gilvesy told Samaritanmag. "And this becomes a handy tool for them. So if they find that they have impact - maybe on water, and maybe on wildlife, then they can offset those impacts again, by purchasing new acres and bringing them into the fold.  In the corporate responsibility world, it's a want, as in, 'we want to prove to Canadians that we are good corporate citizens.'"

Gilvesy said one of the keys to success regarding this program is that the farmer or rancher is managing their own land.

"We think it's really great to upgrade the image of the farmer as the good steward of the land, because they're literally doing something, they're literally managing this,. And it's a big advantage for conservation."

Gilvesy said that approximately half the $5 million donation has gone towards "developing the program" and half "to seed projects on the ground."

"They give us the seed money to start within a community, and then we bring in other money over top. We've had 60 different funding partners."

Established in 1950 by W. Garfield Weston and his wife Reta and their nine children, the private W. Garfield Weston Foundation has already given $100 million to conservation work across Canada. The Foundation is also active in the fields of education, science in Canada's North and neuroscience.