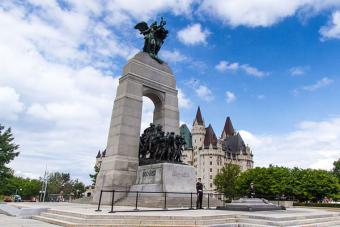 For Commonwealth countries, November 11, better known as Remembrance Day, is a period of deep reflection. The annual memorial day first began in 1919 to recall the end of hostilities of World War I in 1918 and, according to Veterans Affairs Canada, is for "remembrance for the men and women who have served, and continue to serve our country during times of war, conflict and peace."

Remembrance Day is traditionally marked by ceremonies held at war memorial sites across Canadian towns and cities where wreathes are lain in honour of fallen servicepeople. While these are often sombre occasions for the many poppy-wearing thousands who take part in these events, they need not be silent ones. Over the years countless musicians across numerous genres have composed thoughtful and often moving songs connected to Remembrance Day.

We collected seven of these songs below:

These Antigonish, Nova Scotia rockers named their song after the Highway Of Heroes, a portion of Ontario's Highway 401 from CFB Trenton to Toronto, where the bodies of soldiers who died in Afghanistan travel across before being delivered to their families. The song has gone gold in Canada and proceeds from it have gone to the Canadian Hero Fund.

Also known as "No Man's Land" or "Willie McBride," this song is about a person reflecting on the grave a young man who died in WWI by Scottish Irish folk singer Eric Bongle. It has been sung by the likes of Bob Dylan, Donovan, Dropkick Murphys, Joss Stone and John McDermott.

Canadian country star Dean Brody's debut single "Brothers" follows the story of two brothers, one of whom goes off to war and then returns in a wheelchair.

"Money For Nothing" was the big hit song from Dire Straits' Brothers In Arms album in 1985, but it's the title track (seen here performed solo by the band's frontman Mark Knopfler), that may end up having the longest lasting impact. The song was written to commemorate the United Kingdom's Falklands War in 1982 but its message about the foolishness of war is universal.

Written from the perspective of a woman who's lost her husband to war and misses him, Canadian country star George Canyon's "I Want You To Live" touched people deeply when it was released in 2007. The song won CCMA Awards for single of the year and video of the year.

Vera Lynn's "(There’ll Be Bluebirds Over) The White Cliffs of Dover" was a wartime anthem in World War II, adopted as a theme song of sorts by Allied nations in their fight against Nazi Germany. Lynn would also be the subject of Pink Floyd's song"Vera" from their album The Wall.

Taken from Bryan Adams' 1987 album Into The Fire, "Remembrance Day" focuses on what it will be like when fighting ends with its closing verse: